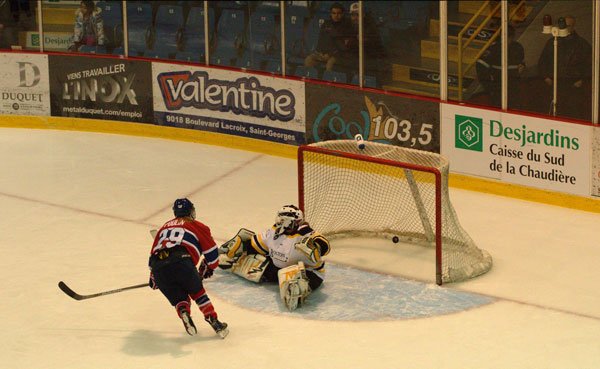 The usual suspects won this past weekend, although in slightly different manners than expected. Calgary swept Toronto, while Les Canadiennes swept Boston. Les Canadiennes now hold a four-point lead in the standings over Calgary. The Furies sit in third, just six points out of first place.

Other News and Notes

The first game finished in an 11-0 Les Canadiennes victory. Marie-Philip Poulin recorded a hat trick and five points overall, while Sarah Lefort had a goal and an assist. Cathy Chartrand also had a multi-point game, recording three assists. Charline Labonte made 11 saves in the win.

Rackleff saw her first set of action for the Blades, and she split the net with Lauren Dahm in the loss. Dahm allowed seven goals on 31 shots, while Rackleff gave up four goals on 21 shots.

“Because we haven’t played in two or three weeks, two weekends but three weeks total, the execution wasn’t there as much as usual, but that’s normal after three weeks," Les Canadiennes assistant coach Lisa-Marie Breton-Lebreux said. "Our biggest strength was to bring the puck to the net in the o-zone, because off the rush we didn’t get much done in the first game; [we were] a lot better in the second game though, but off the power play we had some good goals."

The Blades rebounded and played better on Sunday, but Les Canadiennes still left with a 6-2 win. Poulin scored first, but the Blades scored twice -- thanks to Kate Leary and Kristina Brown -- to take a 2-1 lead in the second. Caroline Ouellette tied the game, one of her three goals, as Les Canadiennes scored five unanswered for the win.

"I thought we showed some good signs," Blades coach Brian McCloskey said. "I thought we defended better on Sunday, we just were on the right side of the play when we needed to be, we weren't getting caught in as many outnumbered situations, fundamental things like that."

While Calgary swept Toronto, both games were decided by just a goal. On Saturday, Jenelle Kohanchuk gave the Furies a lead, but the Inferno scored twice in the second. Michela Cava tied it in the third, forcing the game into overtime. Haley Irwin scored the game-winning goal for Calgary.

In the win, Delayne Brian made 25 saves, while her counterpart Christina Kessler made 29. Calgary's Brigette Lacquette had a goal and an assist, while Blayre Turnbull had two assists. Natalie Spooner assisted on both Toronto goals.

Toronto took the lead again on Sunday, thanks to a goal from Julie Allen. But Jessica Campbell tied the game with less than four minutes left and Brianne Jenner scored the overtime goal. Emerance Maschmeyer made 26 saves for Calgary, while Sonja van der Bliek made 28 for Toronto.

Toronto's head coach Sommer West, who wasn't in attendance but spoke with her coaches after the games, said the team had opportunities to extend their lead. But the game stayed close.

"We showed a lot of resilience and actually we played very well with taking away lanes from Calgary, sticking to our game plan and letting the game come to us," West said. "Two games into overtime I think is a pretty good showing against a team lie that."`

↑ Les Canadiennes' offense: Les Canadiennes scored 17 goals over the weekend. Ouellette had four goals and six points, while Marie-Philip Poulin had five goals and seven points. She leads the league with 14 points, even after missing a couple games because of the Four Nations tournament.

↑ Toronto Furies: The Furies may not have won but, as West said, taking Calgary into overtime is an accomplishment. West said the team is progressing the way she expected.

"I think everybody's bonded into a really good system, but still plays the freedom of hockey because you have to use your own skill," West said. "We've done a really good job of that and we just seem to progressively be getting better. That's what the ultimate goal is because you don't want to peak too early, you just want to get better as the season goes on -- and I think that's what we're doing a really good job at."

↑ Lauren Dahm: Dahm deserves a shoutout for her play. While her save percentage is last in the league, Dahm faces a lot of shots -- the same that Genevieve Lacasse faced -- and already has 282 saves, which is more than any other goaltender. She's made over 40 saves in four games and has reached the 50-save mark twice. Her 59 saves against Les Canadeinnes on Sunday was a career high.

↓ Boston's defense: This might be a staple for a while, but the Blades surrendered 17 goals on the weekend. And in the 6-2 loss, Lauren Dahm faced 65 shots. It's a new team with new faces and new goaltending, so adapting will take them time. There's no question that they have made progress, but there's still a lot of progress left.

↓ Solo netminding duties: Every team had two goaltenders play this weekend. For Les Canadiennes and Boston, it was more a one-time situation where both goaltenders were played, but Toronto and Calgary continued their rotations.

Calgary's rotation is the most interesting. Interesting and a little painful, because it would be a treat to watch any of Calgary's netminders play every game. It's too bad (for anyone who watches) that they can't see players like Maschmeyer start consistently.

↓ Offense: Minus Les Canadiennes' performance against Boston last weekend, the league saw a dip in goals. The series between Toronto and Calgary was low scoring, and there have been just eight games this year where a team has scored more than three goals, and five of those came against the Blades.

It's too early to see if low scoring will be a trend. The league has firepower and goaltending caliber has remained mostly the same, but there's no question teams looked towards defensive strength in the offseason.