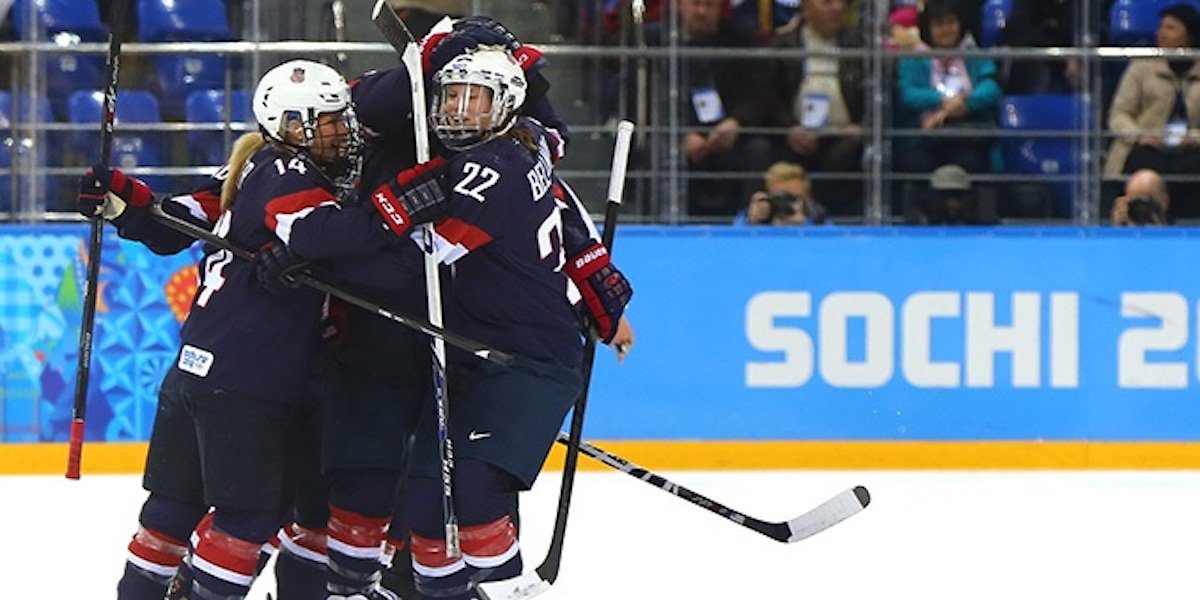 Women from the United States, Canada, Finland, and Sweden converge on Vierumaki, Finland for the 2016 Four Nations Cup, which begins Tuesday.

The United States open its tournament on Tuesday against Sweden at 12:30 PM ET. Canada and Finland also face off at 12:30 PM. While USA/Sweden will not be streamed, Canada/Finland will be streamed today by Leijonat, the Finnish national ice hockey federation. See the full streaming schedule from Leijonat here. All of the streams appear to be available for free via Livestream.com.

They're joined by a slew of NWHL players, including a non-surprising six Boston Pride skaters. Alex Carpenter, Meghan Duggan, and Hilary Knight are just three of the well-known Pride players on the roster. Kacey Bellamy, Amanda Pelkey, and Brianna Decker are also suiting up in the red, white and blue.

Pelkey joined the squad to replace the injured Amanda Kessel. Carpenter and Decker each have three goals and six points this season so far, tied for third in points in the NWHL.

The United States is looking to continue its winning ways, having captured the gold medal in last year's tournament - but they'll need to beat out a tough Team Canada to do it.

This year's Canadian team for Four Nations is
stacked with talented players, a majority of whom are coming from the CWHL.

Nine players from the Calgary Inferno, including a pair of netminders, will suit up for Canada. Emerance Maschmeyer and Genevieve Lacasse are the one-two punch in goal, with Brampton's Erica Howe on tap as the third goaltender.

Inferno forwards Rebecca Johnston, Bailey Bram, Brianne Jenner, Haley Irwin, Jessica Campbell and Sarah Davis are also on Team Canada, along with Calgary defender Brigette Lacquette. Johnston and Lacquette have averaged a point-per-game so far this season with two points each in as many games.

In addition to their goaltender Howe, five other Thunder are also on the Canadian team: defenders Jocelyne Larocque, Laura Fortino and Courtney Birchard; and forwards Jamie Lee Rattray and Laura Stacey. Stacey leads the Thunder with four points (2-2) in as many games this season, while Fortino has three points (1-2) in four games.

Four Toronto Furies and one player from Les Canadiennes de Montreal round out the roster. Erin Ambrose and Renata Fast finish out the defense, while Jenelle Kohanchuk, Natalie Spooner, and Marie-Philip Poulin at forward are consistent scoring threats.

Montreal's Lauriane Rougeau was also invited, but is unable to attend this year's Four Nations Cup due to injury. She was replaced by Lacquette.

For the most part, the Swedish Four Nations roster is a composite of players from other Swedish-league teams, including MODO Hockey, Djurgårdens Stockholm IF and AIK Stockholm.

HV 71 Jönköping's Fanny Rask, IF Sunsdvall Hockey's Erica Uden Johansson round out the forward lines. Maria Lindh and Michelle Löwenhielm, both out of the University of Minnesota Duluth, will also represent Team Sweden. Lindh has four points (1-3) in ten games this season, while Löwenhielm has three assists.

The Finnish team for Four Nations, like the Swedish team, is a composite of players from other teams. Some are playing in Finland, some in Sweden; some in the United States, and even one in Canada. Put together, it makes for an interesting group.

Out of the Swedish league come HC Luleå's Jenni Hiirikoski, Ronja Savolainen, Michelle Karvinen and Noora Tulus. HC Linköping's Minnamari Tuominen, HV 71's Rosa Lindstedt and Riikka Välilä will also represent Finland. Välilä, now 43, is the longest-tenured member of Team Finland and has been a consistent scorer for the team.