As initially reported by Meg Linehan of Excelle Sports, the NWHL is now facing a lawsuit seeking $650,000 in damages to be paid to Michael Moran, a one-time investor and Chief Marketing Officer for the League. The lawsuit was filed in United States District Court in Massachusetts. Via Jen Neale of Puck Daddy, we now have the full document detailing the lawsuit. Here is the Scribd embed of the document:

Click here for a text file version of the document at Pastebin. The text file was exported from Scribd and may not be 100% accurate to the PDF version.

The sum demanded is repayment of startup funds that Moran provided for specific purposes, which are detailed at the end of the document. He is also demanding a prorated salary for duties performed as Chief Marketing Officer. Jen's article provides a really good breakdown of why the $650,000 is being requested:

According to Wikipedia, treble damages is "a term that indicates that a statute permits a court to triple the amount of the actual/compensatory damages to be awarded to a prevailing plaintiff. Treble damages are a multiple of, and not an addition to, actual damages."


Basically, take the $200,000 he wants and multiply it by three. Then add the extra $50,000 he's requesting through a stipulation called 'quantum meruit.' Essentially he wants money for doing work for the league, but the exact amount is not listed in a legally binding contract.

Moran does not just want his money back to recoup his expenses and time -- he's going for as much as he can, it seems, in terms of what he can demand from the NWHL. Moran will be trying to prove in court that damages he suffered as a result of this investment are worthy of extra compensation. Whether he will succeed is obviously up to the civil court system.

Here are some quick hits from the document, which contain facts as presented by Moran and his attorneys. Subsequent thoughts are by the author of this article and are takeaways that are not presented as facts. 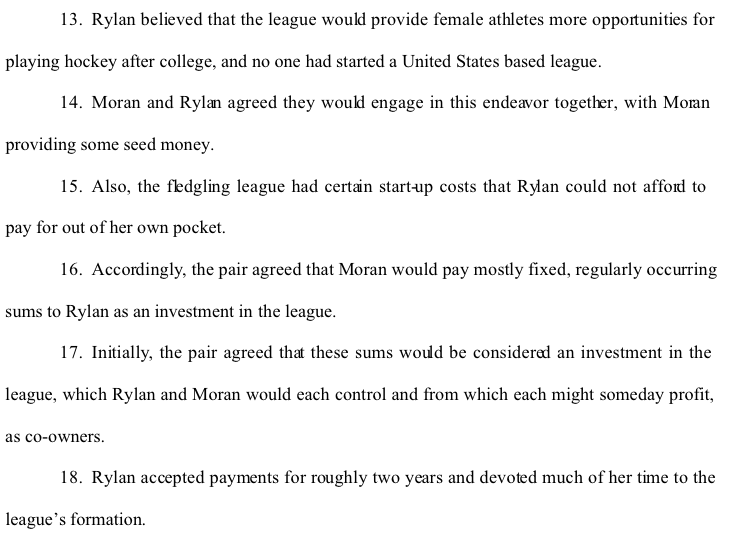 There are a few things about this that seem suspicious (seed money leading to profit-sharing between two individuals) but the real kicker is that none of the terms of money changing hands between Moran and Rylan were ever put into writing:

This would seem to have been an extremely poor and irresponsible decision by both parties, and it also makes the legal proceedings very difficult to predict. It also seems unlikely in the year 2016 that two close friends would entirely do business in person, without any records of text messages, emails, or instant messages alluding to their agreements. The lack of a detailed paper trail is problematic both for Moran's lawsuit and for Rylan's business practices. Even if they were extremely close friends, money is a huge source of tension in any relationship, and not spelling out the terms of that cash changing hands could have doomed this venture between Rylan and Moran from the start, regardless of any ethical concerns. It also makes Moran's claims of damages and breach of contract extremely difficult to prove in court, and raises questions about Moran's motivation for taking this to court. Kate Cimini published a column outlining how the optics of the lawsuit seem less about money and more about tearing down the league's credibility, which is certainly a possibility.

Moran seems to have attempted to terminate his involvement with the league after the NWHL successfully completed its first pay cycle to players (October 2015). The lawsuit alleges that there was no money and that "friends of the league" and others provided the funds. No date is specified regarding Moran's initial disassociation from the NWHL. The communication breakdown is pretty epic. For whatever reason, the parties made no attempt to communicate with each other except through former COO George Spiers (he was fired, and subsequently may have generated anonymous emails to reporters about the state of the league): 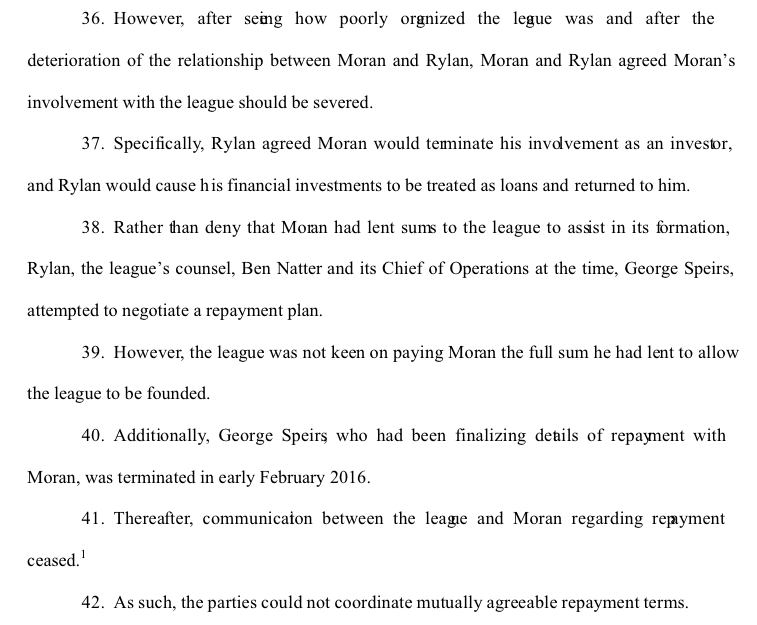 As of February 2016, Moran was still in control of the NWHL's website. A footnote seems to indicate that he was hanging on to control of it, since he paid for it, until he received repayment of his investments.

This is the part of the lawsuit where Moran describes his agreements to invest as a co-founder and co-owner of the NWHL. None of these agreements are substantiated by additional documents:

Moran then states that if the court does not find that his investments can be treated as loans, then they should find that he owns 40% of the NWHL as a controlling interest:

This next part is kind of long, but basically says that Rylan misrepresented their 40/60 partnership to others (again: if there is record of this 40/60 partnership, it is not included), assigned the controlling interest to other parties, and as a result, Moran should be able to terminate his partnership and receive payment because of that. My reading of this (correct me if I'm wrong) is that Moran is asking the court to agree that a 40/60 partnership existed and then grant him a proportional severance. This seems like a tall order without a paper trail confirming that the 40/60 partnership existed. 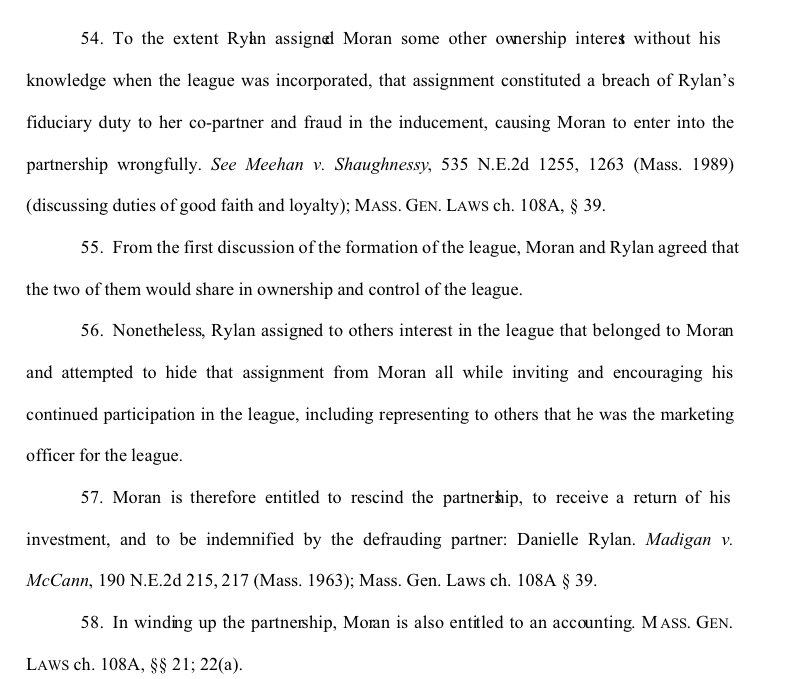 The document goes on to claim that he deserves the $650k sum as damages ("treble damages", as Jen Neale described) because Rylan defrauded him in her representations of him to others, and that agreeing to treat his investment as a loan but then not doing so constitutes a deceptive trade practice.

Again, the document makes the acknowledgement that the court may not be able to find that Moran was ever in a contract relationship with the NWHL. However, he is still demanding payment for services rendered. He claims that league executives are making $80,000-$90,000 a year and that for his tenure as CMO he deserves a prorated sum of $50,000. 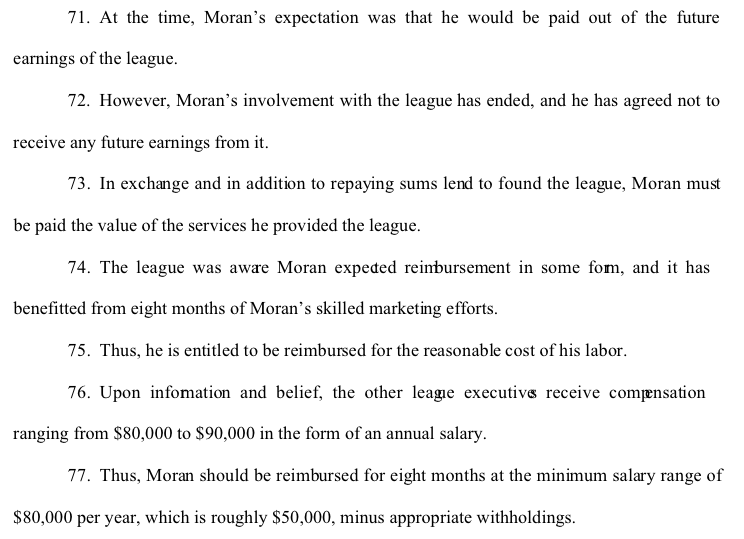 Emails provided with the court document 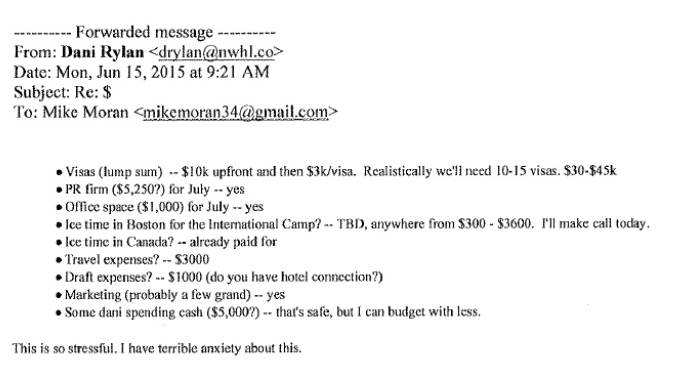 Here, Dani Rylan is itemizing money that Moran will provide for her and for what purposes. She's responding directly, however, to a list that he made. 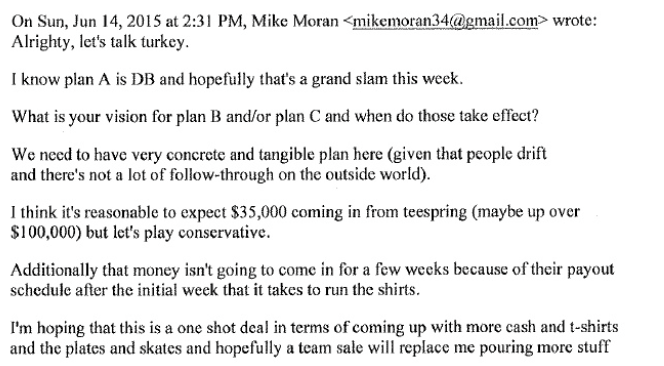 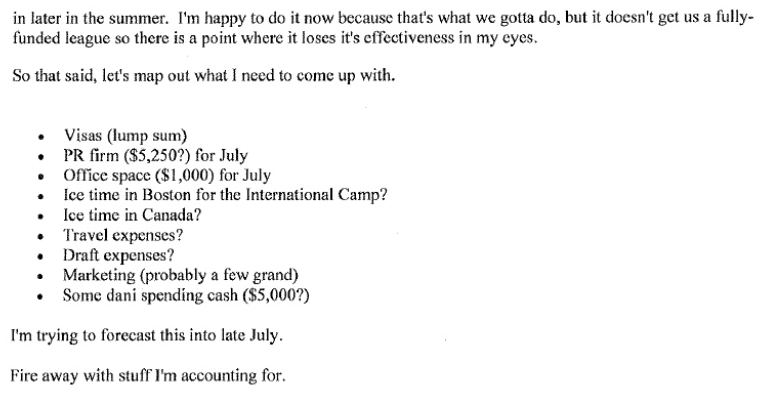 At this point, Moran seems to be anticipating a team being sold so that he can stop funding these expenses. Notable is the $5000 he is providing directly to Rylan as a kind of petty cash.

Rylan says, "This is so stressful. I have terrible anxiety about this," under her itemized list. It's a lot of money changing hands and a lot of moving pieces; it's definitely stressful.

That's where the initial document ends. Without additional evidence or testimony, it may be difficult to prove that Moran believed he had a definite 40% controlling interest in the NWHL or that Rylan was intentionally deceptive. However, that doesn't mean that the court will not find his claims to be partially true, or decide that his funds should be repaid with interest.

This also has the additional caveat that initial reports indicated a pattern of harassment against Rylan by Moran. Whatever this business relationship/friendship was: it was not straightforward or documented properly in order to facilitate the NWHL's business operations. That amount of money changing hands should have been something more than a vague verbal understanding or handshake agreement. The fact that they agreed to deal in future profits is also troubling; it shows both a brazen amount of confidence in the NWHL's financial success and a total lack of concern for sustainability of revenue. In other words, was there really a serious belief that this would immediately and quickly be a profitable venture? As opposed to proceeding cautiously and carefully to ensure that the league could stay afloat from year to year?

The NWHL is currently inking deals with returning players and new prospects (recap to come soon). The outcome of this lawsuit could affect the ability of those contracts to be honored, and therefore the overall survival of the league. We might not know more until it finishes playing out in Massachusetts District Court.