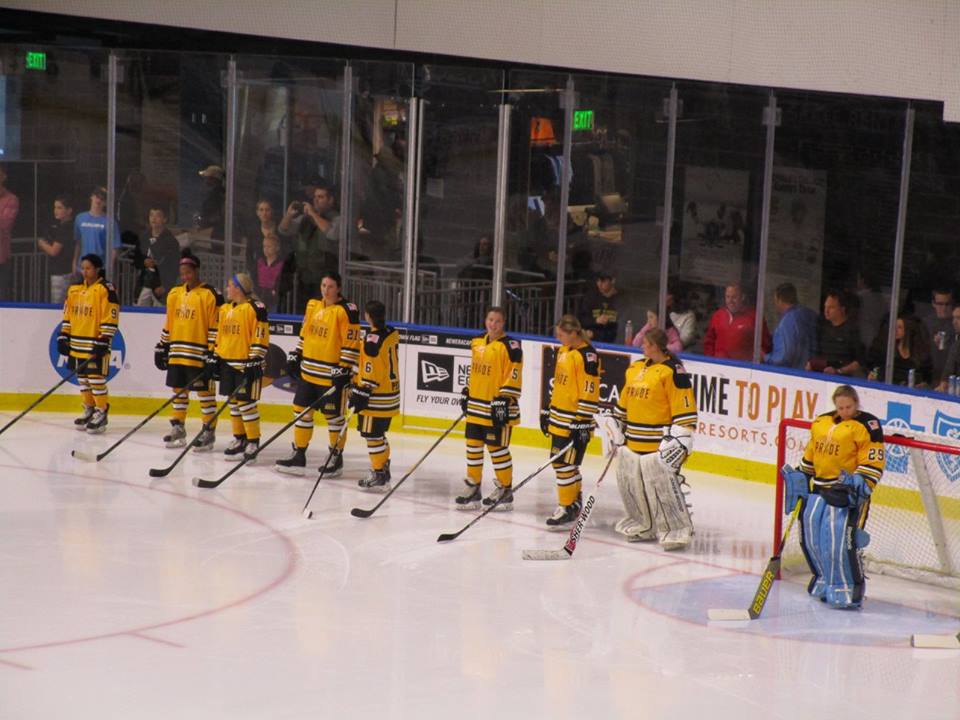 Kaleigh Fratkin, a key part of the Connecticut Whale defense core in the inaugural season, has signed a deal with the New York Riveters. Also joining her is former Whale teammate Jaimie Leonoff, who played a majority of Connecticut's games last season.

A short while later, the Riveters announced the signing of free agent Amanda Kessel from the Minnesota Golden Gophers. Kessel is arguably one of the biggest names in women's hockey in the United States, alongside Hilary Knight, and it's huge to see her enter the NWHL and sign with the Riveters.

New York already appears to be a completely different team from last season. These signings also bring up a lot of questions, including the potential return of Nana Fujimoto to the NWHL, as well as Connecticut's defense.

So far, the Boston Pride have three players signed for the upcoming 2016-2017 NWHL season.

Alyssa Gagliardi became the first member of the Pride's defense for next season, signing a $14,000 contract.

Jillian Dempsey and Jordan Smelker are the first two forwards signed by the Pride; Dempsey will earn $13,000, while Smelker earns $14,000.

The Buffalo Beauts were one of the quieter teams in the restricted free agency period, as they signed just one of their rostered players from the inaugural season.

Paige Harrington re-signed with Buffalo, earning herself a league-minimum $10,000 contract as the first piece of the Beauts' defense for the upcoming season.

The Beauts also signed draft pick goaltender Amanda Leveille out of Minnesota, bringing her in with a $15,000 deal.

The Connecticut Whale were also fairly quiet during the restricted free agency period, signing just two players -- but they are solid ones.

The Whale have brought back forward Kelly Babstock, signing her to a $21,000 contract. Forward Sam Faber is also returning in a deal worth $13,000.

The Riveters were one of the busiest teams during restricted free agency, signing five of their roster players from last season.

Defenders Ashley Johnston and Kiira Dosdall will return to the Riveters, both on contracts worth $13,500 each.

In addition, forwards Bray Ketchum, Madison Packer, and Morgan Fritz-Ward have also re-signed with New York. All three will earn $15,000 next season.

The Riveters also signed forward Miye D'Oench out of Harvard for a league-minimum $10,000, shortly after acquiring her rights from the Boston Pride. In exchange, the Pride picked up the rights to Alex Carpenter.

As of 7 PM on Sunday, May 1, only three signings have occurred in the NWHL's unrestricted free agency period, with Fratkin and Leonoff both signing on with the Riveters and Kessel joining New York for her first season of professional women's hockey.

Those three signings are undeniably huge for the Riveters and almost instantly turn them into a more competitive team. It'll be interesting to see how much improvement we see from New York next season.

But there's still a lot that needs to be done.

Here are just some of the questions each NWHL team is facing in the next few months.

The Riveters are the most "full" team at this point, but realistically, all four NWHL teams still have a lot of players left to sign.

The league currently has no maximum salary per player, but each player does earn a minimum salary of $10,000, and teams have a $270,000 salary cap to use on a 17-player roster.

The Riveters now have $137,000 of cap space tied up in just nine players, which could spell trouble down the road. The biggest question for New York seems to be the return of Nana Fujimoto; if she does, indeed, come back -- how will the team juggle using both her and Leonoff, considering that both have recently played in starter roles?

Another question is goaltender Jenny Scrivens. Thinking logistically, Scrivens' position in the league's public relations office means that she needs to be in New York with the rest of the league's operational team. But what happens if the Riveters don't sign her?

The Pride are, of course, coming off the first-ever NWHL Isobel Cup Championship. They'll look to build a strong team once again in their quest to win it all once again.

Last season, the Pride were arguably the most stacked team in the NWHL. They had many of the US National Team players and were a strong offensive team, backed by players like Hilary Knight and Brianna Decker.

Right now, Boston has signed just a few of their big-name players. Their two top-scorers, Knight and Decker, have yet to re-sign. Gigi Marvin, the team’s top defender, is still a free agent. And don’t forget Brittany Ott, who was another essential piece of the team’s success and their deep run through the playoffs.

But the league's paring down the rosters to 17 players makes things a little trickier, and with the salary cap staying the same, it'll be hard for the Pride to give big contracts to some of their big-name players.

If any of the big names from the Pride move on from Boston, that would dramatically change the makeup of the league, particularly if any of them jump to New York, who is quickly threatening to become an offensive powerhouse.

The Beauts' big question right now seems to be in the net. Last season, Buffalo was largely led by Brianne McLaughlin, with cohorts Amanda Makela and Kimberly Sass.

As it stands right now, the Beauts already have one of their goaltending spots locked up next season in Leveille, which forces them to make some hard decisions in that spot.

Of course, another big question for the Beauts is literally the rest of their roster, as only Harrington is signed at the moment. How about Kelley Steadman, who signed as a practice player last season and ended up being a huge contributor to Buffalo's success? Will she remain a practice player in 2016-17?

The losses of Fratkin and Leonoff to the Riveters are undeniably huge for the Whale; those two players leave behind gaps that Connecticut will need to fill with big signings in the coming months.

Bringing back Babstock and Faber is a great start to free agency for the Whale, but how about Kelli Stack, their top scorer last season? Another key piece to think about: Shiann Darkangelo, who was another of the team's (and the league's) most dangerous forwards, and who made Team USA this past year.

Looking forward at the 2016-2017 NWHL season, there are a lot of questions, from the reports on the lawsuit filed against the league to the player signings that we still await in the months to come. We could certainly see some incredibly different teams hit the ice next season.

The league will host free agency camps in June and July. The NWHL Draft will take place on June 18 and free agency ends July 31.