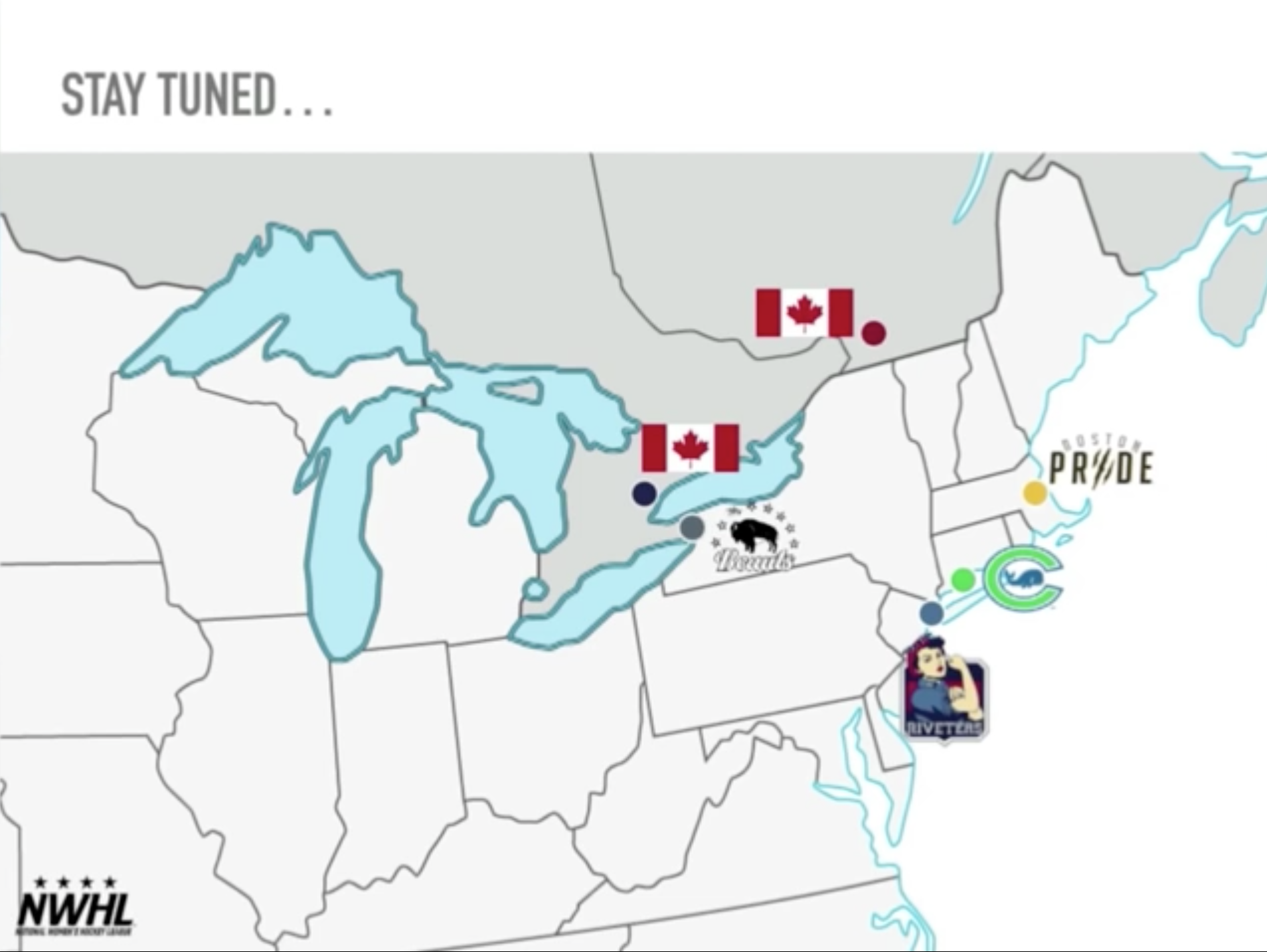 Maybe all of sports does in many ways, but the problem in professional women's hockey is unique to its situation and is amplified by the current perception of a volatile climate within the sport.

We saw this in Boston in 2014, when the Boston Blades had a brief labor strike, due to the unwillingness of some players to sign multi-year contracts to play with the Canadian Women's Hockey League. That multi-year commitment to play without a guaranteed paycheck didn't sit well with many of the American hockey players who called Boston home. The league's only American team felt distanced from their own hockey history playing for the CWHL -- as many of the players were American products of the NCAA development system and members of Team USA.

It also doesn't help that over the last few years, the Boston metro area has exploded into a full-blown housing crisis, with rents continuing to rise and comparatively few housing units being added to the city's well-worn and outdated housing stock. The rising cost of living in Boston has begun to spread like wildfire to the surrounding communities. Those who want to call the region home are often settling on communities further from the city itself, while also accepting increasingly lower standards of living for increasingly higher costs. At the time of their brief strike, the CWHL's Blades had a roster that included many national team players...but there were also plenty of players whose income wasn't being supplemented by USA Hockey, including new college grads starting their very first jobs, players still in school, and players looking for work.

The author of this piece knows a few things about being a recent graduate in Boston looking for a stable living situation, affordable rent, and feasible transportation arrangements to work and extracurricular obligations: it often feels impossible. So when the news set in last summer that many of those players would be joining the new National Women's Hockey League and supplementing their income with an additional $10,000 or more a year, I was over the moon for them, knowing how much that $10,000 means in Boston. I also understood the NWHL's business model to be that of a part-time job, which seemed reasonable when considering the circumstances.

At the other end of the spectrum, though, are those players who live in the United States under the restrictions of a special athlete visa (called a P1 visa), who are unable to work outside of their sporting league. Unlike the CWHL, the NWHL was able to provide these to its international players; but these types of visas do have both pros and cons. As detailed in an article by the New York Times, some Riveters players are living in one of the few housing markets in the United States that is more expensive than Boston -- New York Frigging City -- on an income that falls well under $25,000 a year, the league's maximum salary.

Many Riveters players live together, cutting down on housing costs, and the NWHL has been available to them on a seemingly intimate level to help them out as they navigate life in the city. Attracting international talent is a huge part of "growing the game," and the P1 visa is certainly a draw for those players from Japan, Russia, and elsewhere who want to raise their own game by playing among the best in the world. But human beings have many needs: we need to eat, we get sick, we require shelter, and we have hopes and desires to participate in activities outside of work -- all of which often cost money.

Nothing is yet dire for the NWHL, but its possible expansion tease after it awarded its first Isobel Cup to the Boston Pride sent shockwaves through the fan and media communities, and raised serious concerns which, I think, all go back to this problem of human resources. It isn't really about the money. It's about the "intangibles", as an old-school hockey color commentator might say. Maintaining athletes' bodies at a high level is expensive. And making sure the hearts and minds behind those bodies are healthy too? You can't buy happiness, but financial and personal stability goes a long way towards doing so.

Paying the players means a lot, but the paycheck wouldn't have as much weight or as much cachet if the NWHL hadn't also built a strong brand in US-based hockey markets, as well as gotten the support of so many Team USA athletes who were around for Vancouver and/or Sochi and are hungry for gold in Pyeongchang. The paycheck wouldn't have as much weight if it hadn't also legitimized, embraced, and wholeheartedly celebrated the hockey careers of many players who have never played for and will never play for a national team.

The paycheck won't mean as much if it ever springs from the same lumbering insincerity as NHL paychecks do these days. The recipients of NHL paychecks are often raised in a system that defines masculinity with violence and impulsiveness and ages them through that system, furnishing them with wealth while abusing their bodies and making them dependent on a community that enshrines that violence and that abuse.

The chance that women's hockey has -- to grow the sport without poisoning its pipeline -- could teeter dangerously this offseason if the NWHL elects to expand to Canada, as their graphic suggested to many watching the broadcast. Unless there is an actual tax-free billion dollars waiting in the wings to descend upon the NWHL and furnish it with everything the players need, adding two teams across the border would seem foolhardy at best. To be clear: the NWHL has twentysomething young women living in Brooklyn; and, in at least one case, admittedly living on bagels to make ends meet. This certainly isn't a unique situation, but it's not a situation that you look at and say, "Yes, you know what, the time is right to spread our resources even more thinly, and to spread them across a national border, no less."

As many have pointed out, they would run into those "intangible" problems in Canada, too. It's possible that the NWHL is underestimating the Canadian nationalism that runs deep in hockey communities, especially in Quebec. One of the little Canadian flags in the expansion graphic is planted on Montreal. The other is clearly representative of either Toronto itself or the greater Toronto area.

By the way, we have no indication of what this graphic actually means. But there has been intense speculation. Here are some of the possibilities, keeping in mind that all of this is wildly speculative:

The graphic actually indicates that there might be a merger in the works. The Boston Blades would fold, and Toronto and Brampton would merge into one team, leaving Montreal virtually the same. The main problem with this idea (aside from the fact that it seems preposterous) is that it leaves Calgary, the 2016 Clarkson Cup Champions, in the lurch.

The addition of Calgary to a merged league in this model would not only create an odd number of teams, but would prevent all teams from being within busing distance of each other. To solve the odd-number problem, you could add the Minnesota Whitecaps to the mix, but that still doesn't resolve the travel issues. This makes some logistical sense with respect to the idea of only creating one new franchise from groundwork that is already in place. Or, if you're going with an odd number, you aren't creating any new franchises at all -- just potentially streamlining current travel concerns.

The idea of not including the Calgary Inferno in a potential merged league is so deeply offensive as to not merit discussion. They just won the Clarkson Cup and currently carry some of the best talent on the globe. If women's hockey doesn't envision a future in Western Canada and the American Midwest in general, then it has bigger problems than we might realize.

Also, if a merger is on the table, this means that both Dani Rylan and Brenda Andress have gone full WWE. To wit:

Rylan, via Jen Neale, on the teaser video:

When asked - in person - for comment, NWHL Commissioner Dani Rylan exercised plausible deniability. "I did not see the broadcast," said Rylan with a grin. "180 women graduated NCAA DI colleges this year and it only makes sense that there’s a place for them to play when they’re done and get paid for being the best at what they do."

And Brenda Andress, moments before the Clarkson Cup Final puck drop, immediately brought up what everybody was thinking without actually mentioning it or the NWHL:

I know everybody's wondering about the tweets last night that came out. And so let me just tell you: I'm very aware of it. I think it was a very strategic move on their part. However, today's game is all about our players, the phenomenal season that we've had all year long...And that's really what it's about, and it's not about anything else...I have no idea what they were hinting at. Again, I think it's a very strategic move. And I think today is about our players and that's what we need to concentrate on.

I tweeted this, but it bears repeating. If the NWHL meant to indicate some kind of non-merger friendly inter-league play, they basically dropped some innocuous information with the weight (in the context of women's hockey) of a nuclear weapon.

The above linked post by Jen Neale theorizes that this is the NWHL's attempt to close in on hockey markets in Canada before the CWHL's latest deadline to pay its players by 2017-18, and this would seem both the most likely option, based on the teaser video's implication, and the least sensible action on the part of the NWHL.

Why is this the case?

And a lot has already been said about how the optics of playing the teaser video following the presentation of the first Isobel Cup are just bizarre. Taking the focus off of your new league champions and teasing expansion to Canada the day before the CWHL plays its final game? It is unfortunate, and it's with a heavy heart that I feel the need to publish this column before I publish my in-depth analysis of the Clarkson Cup Final. I've got a hell of a lot of audio to transcribe, and I'd rather be writing about Delayne Brian's outstanding performance, about the players' thoughts on the winner-take-all Final, about what went wrong for Les Canadiennes, because that's what I went to Ottawa to report on.

As a result, I'll be doing that now. In the news, as in any industry, it's better to be good than to be first.