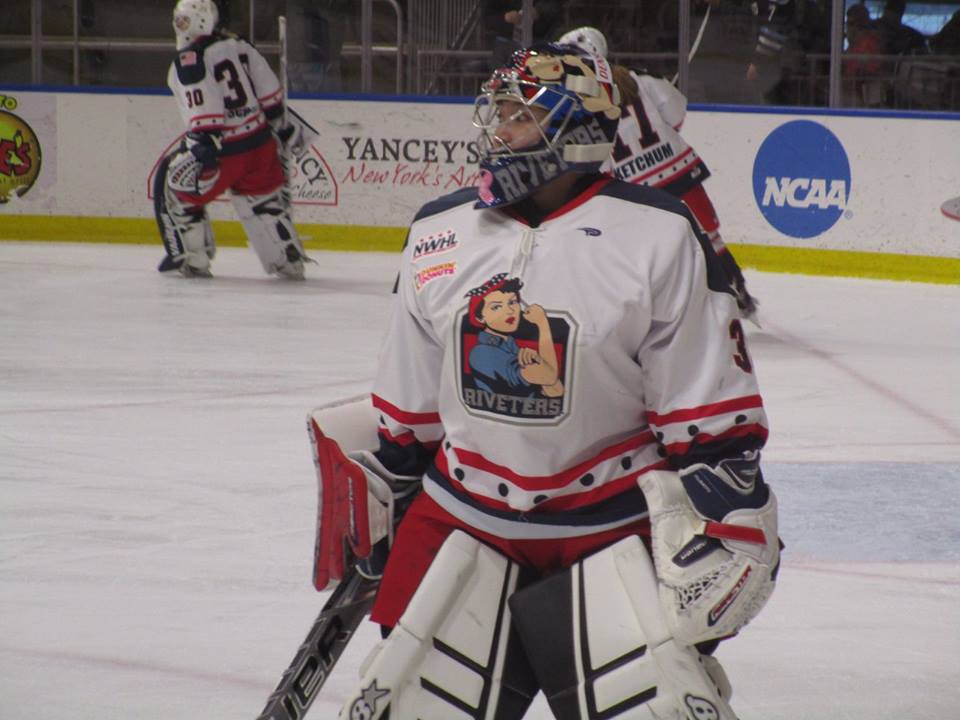 Although the New York Riveters ended the inaugural NWHL season at the bottom of the Founding Four standings, their season was still a historic one.

First and most obviously, they were part of the first NWHL season, but beyond that, they also made history in some other ways.

The Riveters traveled overseas in December to play a three-game series against Smile Japan. Though it was just an exhibition series, it was still an international cooperation and a huge event for the women's hockey league.

This season also saw the Riveters make history as part of the first trade in the NWHL, when they sent goaltender Shenae Lundberg to the Connecticut Whale in exchange for Chelsea Laden.

How did this season end up for the Riveters? Let's take a look.

The Riveters initially struggled to find their feet, dropping the first three games of the season by a combined score of 14-3. That included being outshot 49-25 by the Boston Pride in a 7-1 loss on October 18, a game that saw Lundberg make her NWHL debut.

The Riveters' organization saw their first goal scored on October 11 by none other than Brooke Ammerman:

Finally, after three straight losses -- including two at home -- the Riveters found themselves on the winning side on November 15 when they captured a close 3-2 win over the Pride. Perhaps the most remarkable part? According to the statistics page, the Riveters were outshot 63-25, but still won the game, thanks largely to the spectacular goaltending of Nana Fujimoto.

Fujimoto would carry the majority of the workload for the Riveters this season, appearing in 13 of the 18 regular season games and one of two playoff matches.

Following their first win, the Riveters rallied for another, again versus Boston, and this time on the road.

But then they went on a three-game losing streak, for which Fujimoto was out for two of those games. The Riveters would pick up their next win on December 27, a 7-3 win over the Beauts.

Just like before, however, a win was soon followed by losses -- six in a row this time. If the nail wasn't already in the coffin, it was now. This losing streak would pretty much be enough to push the Riveters to the bottom of the league, a spot where they'd stay for the rest of season.

They pulled off one more win, a 4-3 shootout victory over Buffalo on Valentine's Day, but then lost their last two of the regular season.

The Riveters then faced Boston in the Isobel Cup playoffs, dropping both games by a combined score of 13-4.

As you can see, the Riveters particularly struggled against the Whale this season, picking up just one point in six games.

Ketchum was tied with Brooke Ammerman for the team lead in scoring, both with 14 points on the season. Ketchum's 10 goals led the team, with a whopping half (5) coming on the power play.

Meanwhile, Ammerman's 10 assists led in that category. Ketchum also led the team in shots on goal (60).

Just one player didn't appear in any games this season for the Riveters: forward Erin Barley-Maloney.

Here's a video from when some of the Riveters appeared on BK Live back in February:

Another recommended piece of further media: this article from the New York Times, which highlights some of the Riveters' players and their off-ice jobs.

As with all the other NWHL teams, next season is a bit of a mystery for the Riveters, since all the players only signed one-year contracts. Who will return, and who won't?

Fujimoto was certainly one of the biggest players this season for New York, and her return to the Riveters would mean a lot of help for them next season and going forward. But will she return, or could she end up playing for a men's team in Japan, as this New York Times piece suggests?

Scoring is one thing they'll certainly look to improve on next season. The Riveters had a league-low 40 goals this season, and let's face it: it's hard to win if you can't score, even if your goaltending is stellar.

They'll also look to boost their special teams, which saw scoring on just 12 of 91 power plays (13.2 percent) -- the least effective in the league. The good news is that the Riveters were effective 82.9 percent of the time on the penalty kill, which is a respectable number.

The Riveters have three draft picks set to graduate from Boston College this season, in Alex Carpenter, Haley Skarupa, and Dana Trivigno. They've also got defender Erin Ambrose at Clarkson and goalie Kimberly Newell at Princeton, so there are five more players you could potentially see in the lineup next season. Both Boston & Clarkson are competing in the semifinals of the Women's Frozen Four on March 18.