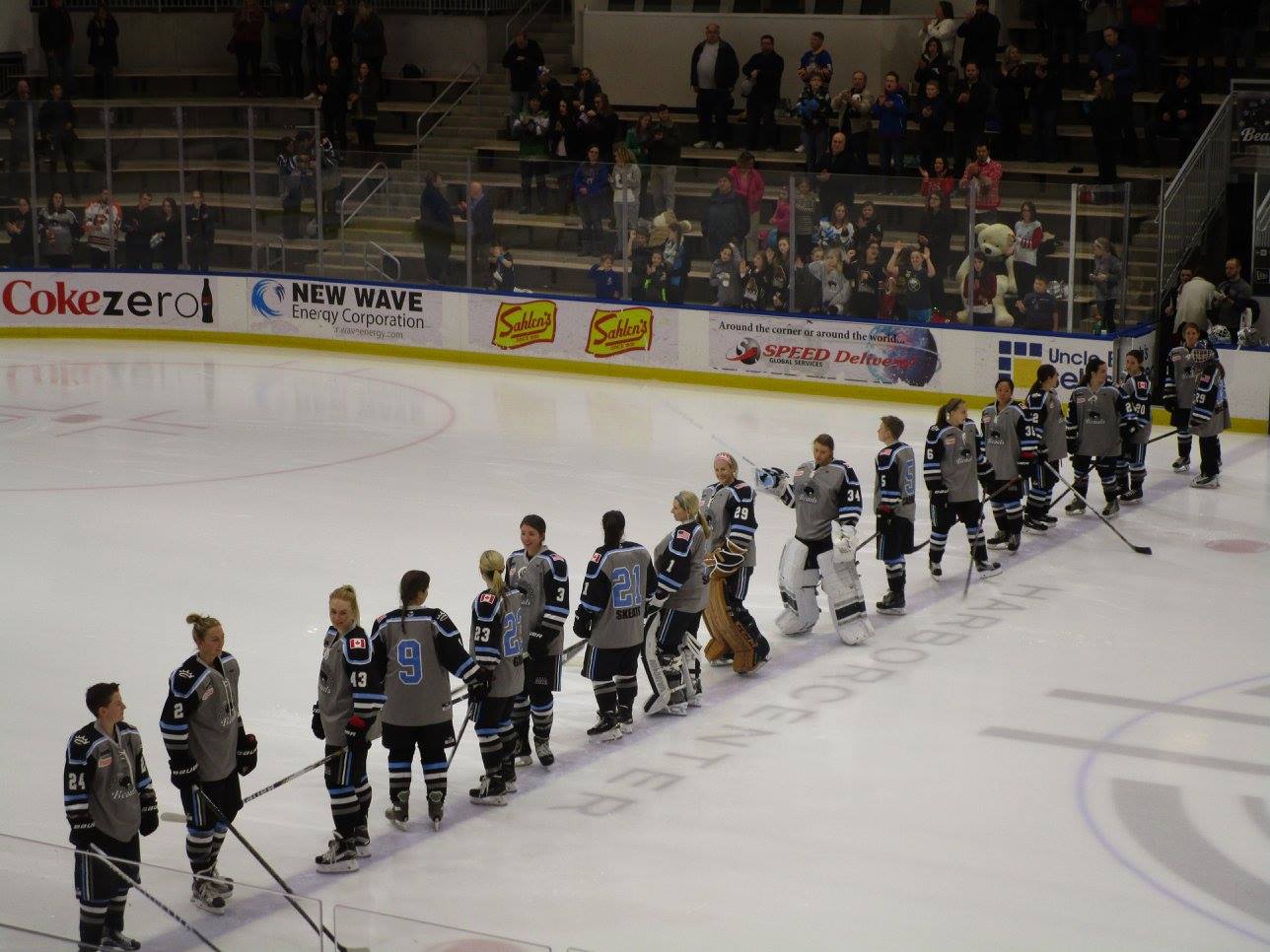 The Buffalo Beauts are headed to the first-ever NWHL Isobel Cup Final, after eliminating the Connecticut Whale in three games over this past weekend. The Beauts fell on Friday in Game One, but came back to win Saturday and Sunday to upset the Whale and earn a spot at the Final in New Jersey this weekend.

Though Connecticut went undefeated against Buffalo in the regular season, the playoffs are a whole new game, as evidenced by the Beauts' strong battle and eventual series win.

Friday’s 3-0 loss for the Buffalo Beauts came, largely, for one reason. No matter what the team did, they simply couldn’t solve Connecticut Whale goaltender Jaimie Leonoff. It wasn’t for a lack of trying -– Buffalo outshot Connecticut 35-21 -- but it also didn’t help that the Beauts were missing two of their best offensive players. Meghan Duggan was out, and Kelley Steadman was in Buffalo with her Robert Morris team at the CHA semifinals. Leonoff's strong play kept all of the Beauts' scoring chances at bay.

In my series preview, I mentioned the Whale’s successful special teams, and the playoffs were no different. In game one, Connecticut was able to score one power-play goal and one shorthanded goal (which was also an empty-netter). The Beauts did struggle to stay out of the box throughout the series, but were able to contain the Whale much better in games two and three.

Kelli Stack scored the first playoff goal in Whale history when she shot it in from just outside the faceoff circle after a 2-on-1 with Shiann Darkangelo. Sam Faber made it 2-0 on a close shot right in front of McLaughlin after the Beauts failed to cover her. Kelly Babstock then scored the empty-netter to give the Whale a 3-0 victory.

Saturday’s game was a completely different story. With Steadman back in the lineup (after Robert Morris was eliminated by Mercyhurst on Friday), the Beauts had that offensive jump they needed. And who better to put the first goal past Leonoff than Steadman herself, just about halfway through the first period? Speed and a quick deflection in front of the net put Buffalo up 1-0. Steadman also later added an assist and was named the first star of the game.

Buffalo didn’t let up, and that persistence has become an important part of their game. Devon Skeats made it 2-0 Buffalo with 32 seconds left in the first period. Quick passes and a lot of bodies in front of the net left Leonoff out of position to make the save, and Skeats was able to tap it in for the goal.

With that, the Beauts had all the momentum. That much was clear when Megan Bozek used her infamous #BozBlast on the power play –- that beautiful slapshot -- just 30 seconds into the period to make it 3-0.

One thing the Beauts needed to focus on was limiting the chances of Connecticut’s best players, such as Kelli Stack and Kelly Babstock. They struggled a little bit with that, allowing Babstock to put the Whale on the board in the second period. With plenty of time left for anything to happen, the Beauts stayed strong and played a defensive game. Hailey Browne then notched the empty-netter to help seal the 4-1 win.

Just like that, the momentum of the series shifted. The Beauts registered their first-ever win against the Whale after Connecticut swept the regular-season series. It was a moment of “Whoa, they can do this,” as the teams headed into Sunday’s game three (which, for the record, I predicted in my series preview).

An interesting question heading into Sunday: do the teams stick with their goaltenders in Leonoff and McLaughlin? Do they switch it up? Having never played three games in as many nights in the NWHL, it was a loaded question. Three games in three days is a lot for any goaltender at any level. In the end, the Beauts stuck with McLaughlin, while the Whale decided to put in Nicole Stock for Sunday’s series-deciding game.

One thing that certainly helped Buffalo in game three: the reintroduction of Meghan Duggan into the lineup. The Beauts had that offensive strength, and they used it early on, as Megan Bozek put Buffalo up 1-0 less than halfway through the first (with an assist to Duggan, of course). Yet another patented #BozBlast from the Buffalo defender from the point; what a shot that one was.

As I said before, Buffalo’s key was to limit the Whale’s big players, which they again struggled with. Kelli Stack put Connecticut on the board to tie the game at one as she came across in front of the net and beat McLaughlin.

In the middle frame, Hailey Browne gave the Beauts a 2-1 lead with literally one second remaining on the clock. Browne took advantage of a huge rebound given up by Stock and made a quick dig to send the puck flying into the net.

But once again, the Whale tied it, with Babstock’s third of the postseason. She had McLaughlin moving in net, cut across in front and helped keep Connecticut in the game.

Buffalo then put up two goals in a span of 4:13, including a header by Devon Skeats on the power-play to give Buffalo its third lead of the night. Bozek then added her second of the game, shorthanded and in the empty net, with 1:14 to play in regulation.

The Beauts were up 4-2, but the Whale weren’t quite done yet. With McLaughlin down and half of the net empty, Babstock potted a quick one with 43 seconds left in regulation, sparking a tiny hope that Connecticut might come back and tie it to force overtime.

After all, the regular-season series was filled with close battles and comebacks (though admittedly, mostly on the Buffalo side). In the end, Buffalo held on to win the game and the series.

This is huge for the Beauts. They were absolutely the underdog heading into this series against the Whale, having lost every game in the regular season against them, and even going down 1-0 in the playoff series. But Buffalo showed the qualities it’s shown for half of the season: determination, perseverance, speed, and that offensive power in players like Skeats, Bozek, and Steadman that could get them far.

In addition, McLaughlin had 79 saves on 85 shots faced in three games. Though there were a few questionable goals that shouldn’t have ended up in the back of the net, overall, the Beauts played a strong defensive game.

Now, Buffalo will prepare to face a challenging Boston Pride team that swept the New York Riveters 2-0. The Beauts and the Pride will compete for the first-ever Isobel Cup beginning Friday in Newark, NJ.