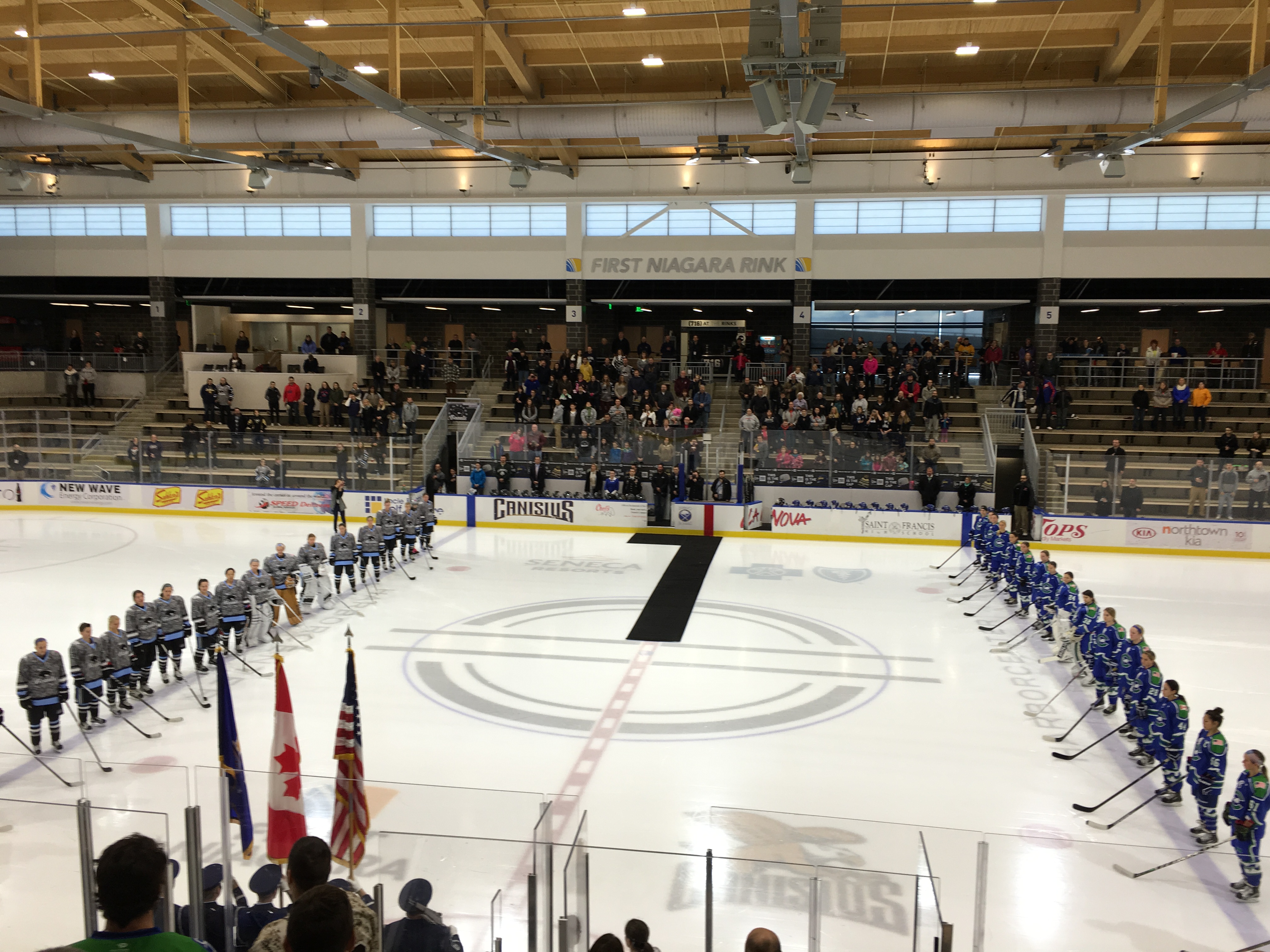 After wrapping up the first NWHL regular season, the Buffalo Beauts and Connecticut Whale now prepare to face each other in the playoffs beginning March 4, with the winner going on to fight for the Isobel Cup.

Before we go into specifics about the upcoming series, let's take a look at each team's entire season.

The Whale put together a solid on-ice record, despite facing some off-ice issues in the inaugural NWHL season. Head coach Jake Mastel resigned before a practice in late January. The league then hired Heather Linstad as his replacement, a move that has been frequently criticized, due to Linstad's past.

Linstad was head coach of UConn’s women’s ice hockey team for 13 years. She resigned after an incident in which the team’s goaltender alleged that she was raped by a member of the men’s ice hockey program. The victim filed a Title IX lawsuit against UConn, stating that Linstad told her to quit the team instead of offering support after the incident.

The Whale have also gone through three general managers this season, with the NWHL currently taking hold of the team in that respect. Chris Ardito resigned prior to the season's beginning; Harry Rosenholtz took over, with George Speirs following him. Speirs resigned as GM, as well as in his position as the league's COO, on February 10.

It's safe to say that amid all those changes, it would be understandable if the team had struggled -- but they really haven't. For a good part of the season, the Whale sat atop the league and finished just three points behind the Boston Pride. Connecticut went 13-5-0-0 this season with a plus-10 goal differential. They also carried a league-high 248 penalty minutes, showing that their play could be undisciplined at times, but they rarely ended up losing games because of this factor.

While the fight for first place was largely between Boston and Connecticut, the Buffalo Beauts and NY Riveters went back-and-forth between the third and fourth-place spots in the league. In the end, the Beauts pulled away with the extra points necessary to clinch third, and left the Riveters four points back in their dust.

The Beauts struggled early on in the season, as they were missing a few players due to visa issues. They allowed their opponents to get a lot of shots and to have too much space, which often resulted in lackluster performances. It took until their sixth game to register a win. But as the team came together, and all players became eligible to play, things started to gel for the team. They ended the season 5-9-0-4 with a minus-10 goal differential and a league-low 175 penalty minutes.

If we were to look at the season series between the Beauts and Whale, it'd be easy to say that Connecticut has the edge heading into the playoffs. They may have swept the season series, but it's not that simple. Pretty much every game between the teams was a close one that was decided by one or two goals, and they teams battled hard throughout the 60 minutes (or more). Two of the games required a shootout, with one more decided in overtime.

"It's been like a rollercoaster with them," said Beauts forward Devon Skeats. "They stole so many wins from us, but we know we can beat them. That's why we're so excited to play them in the playoffs."

Whale defender Kaleigh Fratkin led all players in the season series, with ten points (4-6) in six games. For the Beauts, Kelley Steadman notched nine points, including five goals, against the Whale this season.

Kelly Babstock and Meghan Duggan each registered eight points in the season series, while Kelli Stack had seven points for the Whale against the Beauts.

Taking all that into consideration, it's important to note that we don't know for sure which players will be missing from their respective teams for the Isobel Cup Playoffs. Steadman works with the RMU Women's Hockey team, and it's expected that she'll be with them in Buffalo this weekend as they face the semifinals (and potentially championships) for College Hockey America. RMU faces Mercyhurst in the semifinals Friday afternoon, so Steadman is almost certainly out for Friday's game, at the very least.

Of course, if the Beauts are rolling with a full, healthy lineup, Steadman will be out of the lineup for playoffs regardless of her availability, due to her eligibility as a practice player. But it'd be difficult to say that Buffalo couldn't use her; she's been one of the team's best players this season and one of the best league-wide as well.

All three Buffalo netminders saw action against the Whale this season, led by Brianne McLaughlin. She faced 95 shots from Connecticut, including 47 in the first matchup, and allowed 12 goals. Her season series against the Whale included getting pulled after the first period on November 22. (Both teams switched goaltenders.)

Kimberly Sass appeared in one game against the Whale, the November 15th 3-2 regulation loss. She registered 23 saves on 26 shots faced in the game, which also marked her NWHL debut.

In order for the Beauts to be successful in the playoffs, they have to limit the number of shots they allow other teams to take. Too often, especially early on in the season, the opponent was able to take 40+ shots. That puts a strain on the defense and the goaltender, and being constantly on the defense makes it difficult to get offensive opportunities.

Could the Whale have a better chance at success due to having home-ice advantage? Perhaps, but I don't think this is as significant a factor. The Whale won four of seven home games this season, which is solid but doesn't necessarily speak to their strength as the home team. It is what it is, and either way, whichever teams reach the Isobel Cup Finals will have to deal with a new rink.

However, one of the things the Beauts have going for them is their speed. Ric Seiling, Shelley Looney, and GM Linda Mroz have built a team of quick, hard-working players with a lot of energy. Their speed can't be understated, and the Whale will need to keep up.

As the season's gone on, the Beauts have come together as a team and built chemistry; now, they need to continue to work on their communication as the playoffs begin, as well as getting pucks to the net, getting bodies to the net, and providing goaltender support.

For the Whale, they'll need to work hard on containing the Beauts. Multiple times this season, Connecticut held a lead and let Buffalo come close to, if not actually, tying it up. That included the November game where the Whale held a 6-1 lead in the second period; Buffalo tied it up and eventually forced a shootout.

The Whale's key to success: special teams. Who can forget the 7-6 win back in November that saw the Beauts and Whale combine for eight special-teams goals, including seven power-play tallies? Connecticut registered an eyebrow-raising four power-play goals in that game. Buffalo will need to limit its penalty time and be strong on the kill when necessary; the Whale are downright dangerous when they have the advantage.

Overall this season, the Whale had the best penalty-kill (85.3%) in the league, allowing just 15 power-play goals against on 102 shorthanded opportunities. Buffalo allowed 16 on 74.

In contrast, the Beauts actually led the NWHL with six shorthanded goals this season, while the Whale's 16 power-play goals are the best in the league -- though actually only one better than Buffalo's PPG total. But the difference lies in the other numbers: the Whale scored on 16 of 75 opportunities (21.3 percent), the best in the league. Buffalo scored on 15 of 96 power-play chances (15.6 percent).

Another big aspect to the upcoming playoffs is the potential for teams to be playing three games in as many days. The NWHL's regular season mostly saw a single game per week, so going from that kind of gap between games to playing two-in-two and possibly three-in-three certainly provides a challenge.

It all comes down to training, workouts and preparation, according to both Skeats and Beauts netminder McLaughlin.

"It's going to come down to recovery and nutrition, making sure we're doing things that are best for our bodies," McLaughlin said.

Skeats noted the hard work throughout the season of the Beauts' trainer, Tom Gooding, and how he's prepared workouts to prep the team for the upcoming playoffs.

As McLaughlin also pointed out, all the teams are in the same boat right now.

Though the Beauts failed to beat the Whale in the regular season, don't count them out just yet.

"I think every girl in this room knows we can beat any of the teams in this league," said Skeats.

The Beauts and Whale playoff schedule is as follows:

All three games will be played at Chelsea Piers in Stamford, Connecticut. Per a league release, all NWHL Isobel Cup playoff games will be streamed online through ESPN3 and the Cross-Ice Pass.

If I had to predict this one, I'd say it'll go to three games - but I don't think I can declare a winner. I think both teams have something to prove here and we could see at least one, if not more, of the playoff games head to extra time, considering the way the season series has gone. It should be a thrilling and tightly contested matchup.