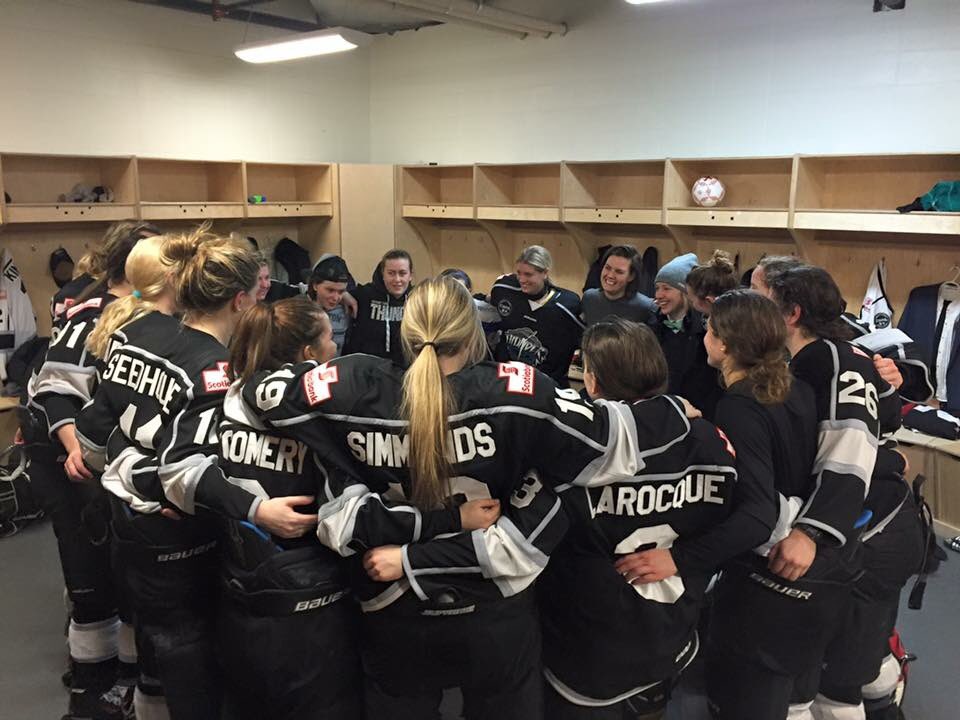 The Clarkson Cup semifinals this past weekend featured two sweeps, with both Calgary and Les Canadiennes advancing to the Clarkson Cup Final. The teams will meet on Sunday, March 13 in Ottawa for the winner-take-all championship game.

Team Canada's roster for the Women's World Championship was also announced -- and it features 18 CWHL players.

The Inferno jumped out to a 2-0 lead in the opening 10:15 of Game 1, thanks to goals from Hayley Wickenheiser and Jill Saulnier. Brampton got in the board in the second thanks to Jenna McParland, who scored with 4:48 left in the period.

Blayre Turnbull extended Calgary's lead to 3-1, 9:57 minutes into the third period. Rebecca Vint responded to pull Brampton within one, but Rebecca Johnston sealed the win with an empty-net goal.

“We played a good system -- we just couldn’t get pucks to the net when we had our chances," said Brampton head coach Tyler Fines.

With Liz Knox still out with an injury, Erica Howe started both games for Brampton. She made 29 saves in the loss, while Delayne Brian had 17 saves.

"Erica Howe stood on her head for us," Fines said.

The next night, Calgary's Meaghan Mikkelson-Reid scored 2:34 into the game. Sarah Edney tied things up less than seven minutes later. The first-period scoring didn't stop there, though, as Calgary scored twice to take the 3-1 lead into intermission.

With just 1:06 left in the second, Brampton started to close the gap thanks to a Courtney Birchard goal -- and Rebecca Vint tied it 10:03 into the third.

But Johnston again rose to the occasion for Calgary, scoring 2:24 minutes later to give Calgary the 4-3 win and the series.

"We didn’t capitalize on our power plays, we gave up some goals on the penalty kill...Special teams will make our break you, and we just [needed to] score goals when we had our chances," Fines said.

In Game 1 after a scoreless first, Les Canadiennes put up three goals in the second -- one from Ann-Sophie Bettez and two from Caroline Ouellette. Marie-Philip Poulin added two goals in the third to make it 5-0 for Les Canadiennes. Natalie Spooner scored last to break the shutout bid.

In the loss, Christina Kessler made 23 saves. Sonja van der Bliek played 14:05 in relief and made six saves. Charline Labonte made 14 saves.

“We did the best within our abilities all weekend, to be honest," Toronto head coach Sommer West said.

“I think for two games, we competed as hard as we could. I think everybody would attest to that they left everything on the ice in each game and a lot of people really tried to step up and do the best they could.

"At the end of they day, they were just better than us.”

“We just didn’t have the numbers," West said. "You can’t compete for 60 minutes without your whole lineup. You tend to get bad habits as the game goes on and you get tired."

↑ Erica Howe: Howe was named the team's starter for this week, with Jamie Miller dressed as the backup because of Liz Knox's injury. Fines said they'd discussed making Howe the starter, and Knox's injury just cemented the idea.

Howe made 26 saves on Friday and 27 saves on Saturday.

"I see today she made Team Canada; it’s well deserved," Fines said. "She’s a leader in the room and she’s very well liked among teammates...She’s a true winner.”

↑ Delayne Brian: Brian responded well this week, and especially in the second game where she faced 30 shots.

↑ Les Canadiennes offense: Les Canadiennes had no trouble scoring this weekend (but who thought they would?) -- and they got a lot of scoring help from their top line of Poulin, Bettez, and Kim Deschênes, plus Caroline Ouellette on the second line.

↓ Toronto's depth: The Furies, who have played the season without two key players in Julie Allen and Jenelle Kohanchuck, were just too understaffed this weekend.

"We just didn’t have the numbers," West said. "We had some players that didn’t travel with us and end of the day when you’re going to face the No. 1 team in the league, [you have to] have your whole team. Not having our whole team there really put us behind the eight ball."

↓ Brampton's special teams: For Fines, a big weakness for Brampton this weekend was the team's inefficiency on special teams.

"We didn’t capitalize on our power plays, we gave up some goals on the penalty kill," Fines said. The Inferno went 3-for-9 on the power play, while Brampton was 0-for-14 on the weekend.

↓ Les Canadiennes penalties: While we're on the subject of special teams, Les Canadiennes surrendered just four power play opportunities this weekend on four penalties, which makes them the least penalized team in the playoffs so far.