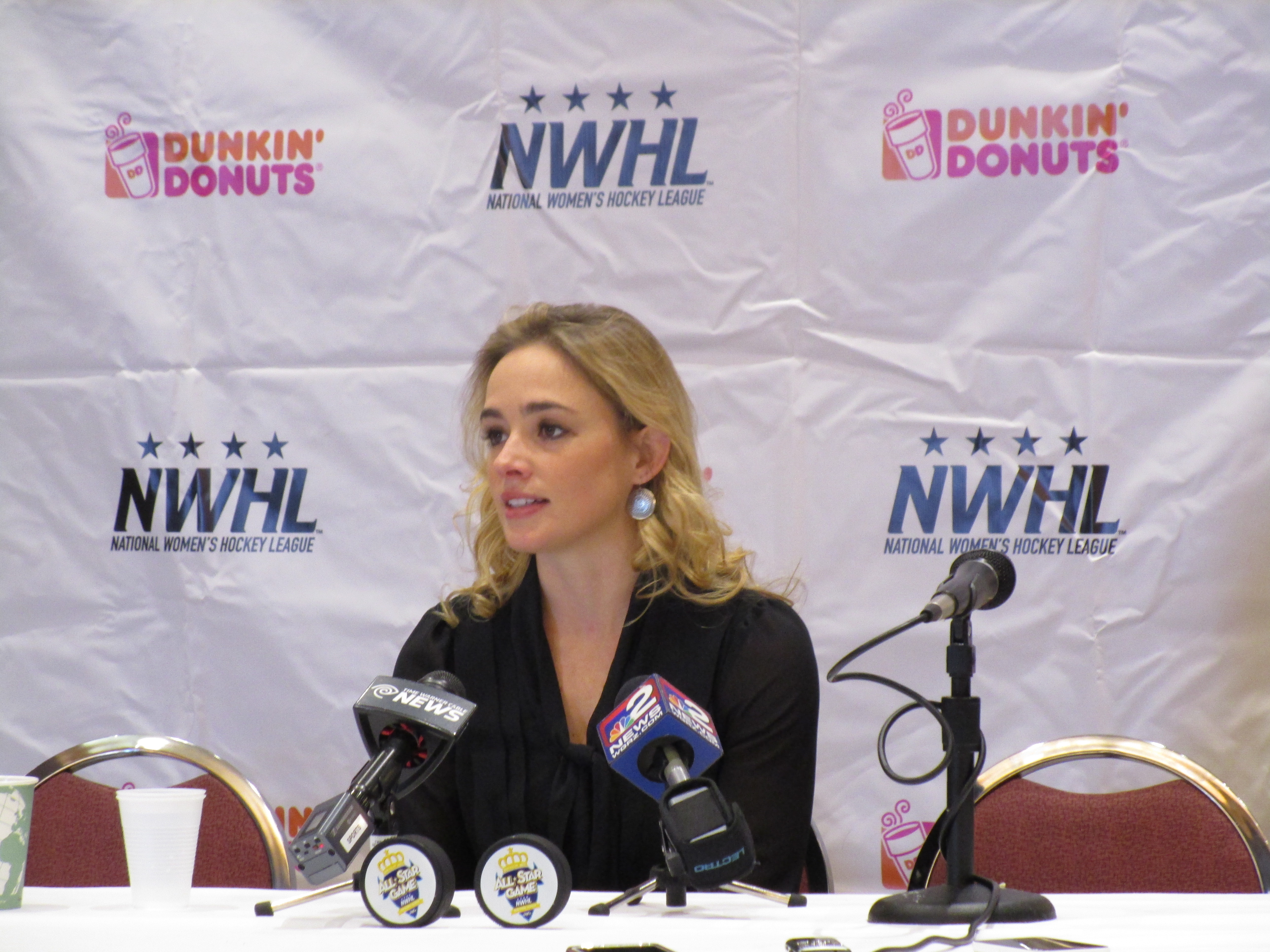 She told of a young boy, age between 11 and 12, who ran around the rink telling fans to vote for Madison Packer as one of the fan choices for the NWHL All-Star Game.

“His favorite hockey player doesn’t play for the Rangers, Islanders, or the Devils,” Rylan said.

“His favorite player plays for the Riveters.”

It’s that kind of growth in the fanbase that’s helped the NWHL get to where it is today, and which will help it succeed in the future.

Rylan called the league’s fanbase “diverse” and noted that it’s been split fairly evenly between men and women, which came as a bit of surprise.

“It’s not just girl hockey players or females coming to the game, but also young boys who are extremely passionate about the girls’ game,” Rylan said. “They realize what good hockey is, just as any young girl would.”

Rylan recently noted that the NWHL is set financially for its second year, with the four teams it currently has: Buffalo, Boston, New York, and Connecticut.

Though the league has faced its challenges, it certainly seems to be doing well. Over 1,000 jerseys were sold in the first month of availability and we've seen steady streams of fans filing into rinks and watching online.

Overall, the players seem to be happy with how things are going, too.

“The first year of any league, it’s a trial and error and I think things have gone really well,” said Buffalo Beauts defender Megan Bozek.

“I’ve been really impressed by the organization of the league, the way that they treat us with a ton of respect and let us just be professionals and play the sport that we absolutely love to play at a very high level," said Hilary Knight.

“I think with anything new, you’re always scared and there’s a risk there to jump ship and try something new,” Knight said. “But at the same time, I’m so happy that everybody took the jump and decided to help create this amazing organization.”

Rylan said that the focus has always been on making the league’s first year a success, an achievement that has been proven partly through the league’s broadcast/streaming deals with NESN and ESPN3, as well as their corporate sponsorship with Dunkin Donuts thus far.

Going forward, the league will continue to bring in more sponsors, a feat that should be aided by the fact that the league now has what Rylan calls a “tangible product.”

“We have numbers to present to these sponsors. We know what our fanbase looks like, and we know how passionate they are. Sponsors see a value in and outside our fans,” Rylan said.

“Outside of the league as a whole, we also have 88 brand ambassadors [the players] that are ready to support anyone who supports them,” Rylan said.

Though expansion has certainly been a hot-button topic, Rylan said that’s down the line -- but that it's not necessarily coming too soon, as the league doesn’t want to expand too quickly.

“As the game grows, it’s going to have to expand at some point,” Rylan said. “With the talent on the ice, there has to be somewhere for these players to play.”

Connecticut Whale forward Kelli Stack seemed excited about the prospect of someday adding teams to the league, noting that “when you’re playing the same teams six times, it gets kind of intense out there.”

For now, the NWHL will continue with its four teams, all of which are currently owned by the league itself. Rylan noted that if at some point, the right investor or franchise owner presents themselves, it’s something that the league will consider.

As the league looks to finalize and plan for the second season, Rylan said the NWHL looks to grow exponentially.

“We want to pay the players more every year,” she said.

Playing professionally in a league such as the NWHL was, for many years, just a dream for many of these players; now, that dream has come true.

“Getting to paid to play is just unbelievable, and being the first group to do it is awesome,” said Buffalo Beauts forward Shelby Bram.

Hilary Knight noted that, at the age of 26, she just recently opened her first savings account, a move that came as a direct result of getting paid to play hockey.

Another supporting factor in the NWHL’s growing success is the league’s developing relationship with the NHL, a partnership that can be mutually beneficial to both sides.

“The more girls we influence to get into the game...they may eventually turn into Sabres fans, or Beauts fans...Bruins fans or Pride,” Rylan said. “It’s fan development across the board.”

Of course, a huge showing of the NHL’s willingness to partner with the NWHL was the Women’s Winter Classic at Gillette Stadium. Though the event had its pitfalls, it was the start of something that will hopefully continue for years to come.

“I expect us to be at the Winter Classic next year, and hopefully more events outside of that,” Rylan said of the NWHL’s partnership with the NHL.

Rylan also spoke on the NWHL’s growing relationship with the CWHL -- which, again, was largely visible in the Women’s Winter Classic.

“We look to continue to coexist with them,” she said.

When asked about a possible merger for the two leagues, Rylan said that while it may seem easy in principle, in practice, a merge would be a little more complex.

“I think there may be a few obstacles on the surface level,” she said. “It may seem like ‘Oh, why not just merge?’ but obviously there are a few more complications to make that a reality.”

For now, Rylan said that the NWHL hopes to have more opportunities to play with the CWHL in the future.

Though it’s easy to think about next season -- and years to come after that -- it’s important to keep focusing on the first year. The NWHL commissioner said she’s already fielded questions about the post-season awards ceremony (the details of which are unknown at this point).

However, Rylan did release several key, previously-unknown details about the NWHL playoff format at her Media Day press conference.

The playoffs will see the first-place and fourth-place teams face off, with the second- and third-place teams making up the other pairing. The playoff series will be a best of three, with locations to be determined. The first round will be held between March 4 and March 6.

The championship round will then be held March 11-13, again a best-of-three.

It’s unclear at this point if the format could see all three games in one series played at one rink, or if they’ll be split somehow (1-2, or 2-1, or 1-1-1) between the teams’ rinks, or played in some other fashion.

Travel has been a minor issue for the league, and with Rylan’s announced dates, it seems like the playoffs could see the teams play three games in as many days.

An official announcement re: playoffs, format, etc. is expected in the coming weeks.

As the days continue for the NWHL -- a league that literally didn’t exist a year ago -- the league looks to continue to grow every day.

“We want to build the game, from the grassroots level all the way to the pros,” Rylan said.

“Letting the next generation look up to these players and dream of being a professional hockey player...has been part of our plan from the beginning,” Rylan added.

Knight summed up her feelings on the NWHL’s first season in just a few words:

“I think one of the brilliant things about this league is that they’re looking to get better in every way possible, every single day.”