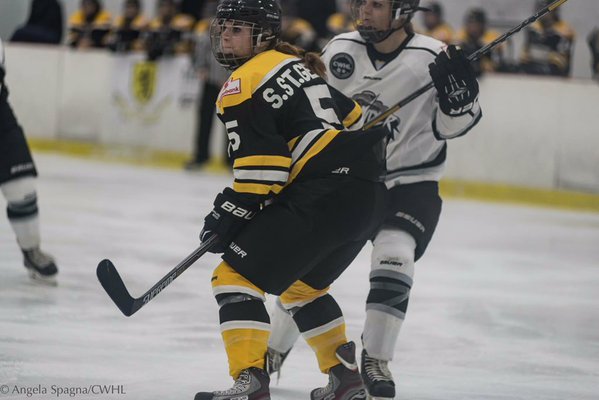 Boston Blades forward Sadie St. Germain had an artist for a mother and a database specialist for a father. Immersed in both art and computers as a child, St. Germain has combined both of these passions.

“Even when I was little, even on like just basic Paint or PowerPoint, I used to screw around with animating,” St. Germain said.

She took digital art classes in high school, where she selected graphic design as her major at Syracuse University. As a senior at Syracuse, St. Germain redesigned the Wizard Card Game. She imagined new packaging for the cards, a deluxe set with a spinner, and the website. Her redesign was featured in The Dieline -- an established blog dedicated to the package design industry -- and it won third place in the Concepts We Wish Were Real Award this past December.

“[Graphic designing is] definitely time-consuming, just because everything you create requires a lot of thought,” St. Germain said.

“Even when you’re making someone’s logo, you go through tons of iterations to get to the final one and everything can always be changed. You can keep tweaking forever.”

While earning a degree in graphic design, St. Germain was also playing hockey at Syracuse. She skated in 139 games and finished with 55 points before graduating in 2014. But while St. Germain was lacing up her skates for ice hockey in Syracuse, she was also putting on some sneakers for ball hockey.

Ball, or street, hockey was a sport that St. Germain began playing when she was three years old -- the same age when she started playing ice hockey.

“I think my mom just threw me in it because it was more hockey,” St. Germain said.

After playing both sports a a child, St. Germain stopped playing ball hockey in middle school, where she picked up other sports. But after arriving at college, St. Germain picked up the sport again to help with offseason conditioning.

“We had these summer workouts that required a lot of running and [a] lot of agility,” St. Germain said. “I knew that I was not the type of person that was probably going to hold to a strict regiment of going out to a football field and doing suicides, or something like that. [Ball hockey] helped me get my conditioning in and it really improved my agility and my stick handling. I kind of used it to supplement my training and my lifting during the summer when I went back to Syracuse.”

Aside from help with off-ice conditioning, St. Germain played in several tournaments during the winter. She also played in two ball hockey world tournaments.

“It’s a little bit different the way you get a shot off. And definitely switching from a ball to the puck, the puck is so much heavier, so when you first transition from playing street hockey [to] ice hockey, your shot is awful because the ball’s so light. Especially the ball hockey tournaments, they’re on full ice surface, so it’s as much running as you would do skating, but obviously on skates you move a lot quicker."

Now St. Germain is in her first season of professional ice hockey, suiting up for the Blades alongside her sister, Clara -- one of the defenders on the team.

Another challenge for St. Germain comes from playing games without the same number of practices that occupied her time in college.

“Hopefully when I come back next year, I would definitely like to get in the gym a little bit more, because my knees have kind of quit on me this year,” St. Germain said. “I’m carrying less muscle than I did in college because we practice less. Every time I get on the ice, I think, for weekends, it’s a little bit of a shock to my muscles.”

The St. Germain sisters are part of a new, young core for the Blades, a team which suffered many off-season losses to the newly-formed NWHL. But St. Germain has found a mentor in Olympian Tara Watchorn, a Blades veteran.

“[My sister and I] have met some other Olympians, and Tara is unlike that. It’s amazing that she can be that good and still that kind of person,” St. Germain said said. “She’s just so nice.”

It’s been a difficult season for the Blades. Boston is last in the CWHL, has just one win this season, and is on a 16-game losing streak. But St. Germain said Watchorn has been both encouraging and positive.

“I think a lot of us a lot of us on the team kind of dealt with our own issues in college with coaches or whatever," St. Germain said. "A lot of girls on the team didn’t have the highest confidence coming into the season just through being kind of worn down in college.

"[Tara] told us to forget about it and just to be confident again. I think everybody’s been doing much better with that.”