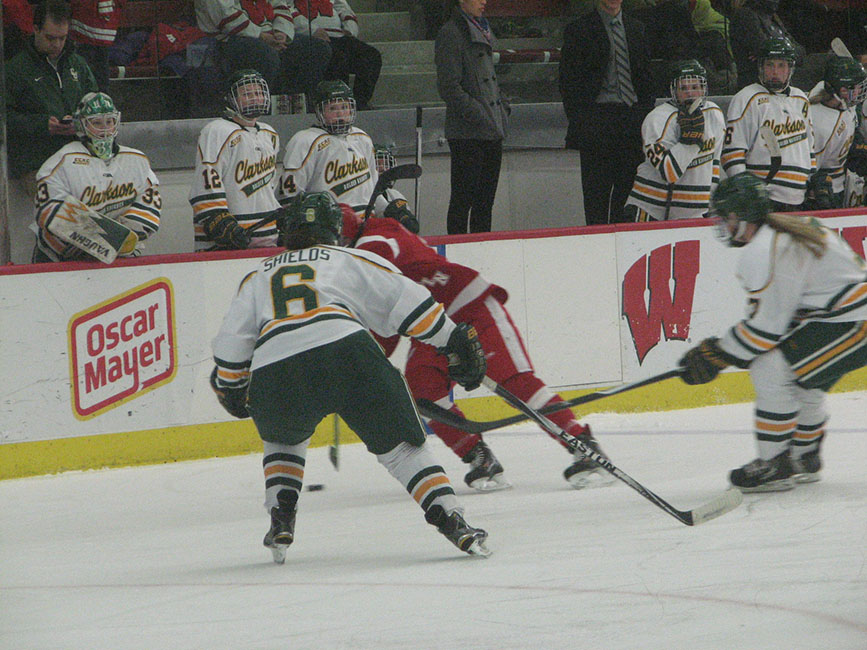 Watch and listen: Video is available online from Eversport. It's $6.99 for a 24-hour pass.

The top two teams in the CHA face off four times in the next two weeks, and at the end of it we'll likely know who will be in the driver's seat in the conference.

Mercyhurst certainly has history on their side, but Syracuse has put together a potent top line.

Special teams could give Mercyhurst the edge, but the difference is most likely to be made by which team's goaltender will step up.

It's likely that we'll see a split this weekend, but if one of the goalies shuts down the opponent today, I give the edge to that team for a sweep tomorrow.

Watch and listen: Free video appears to be available via Clarkson.

This is another game that could come down to goalies -- but in this case, it's because it will feature two of the best in the game.

Emerance Maschmeyer at Harvard isn't flashy, but she's likely one of the main reasons her team is still ranked. The Crimson have just one player averaging more than a point a game (Miye D'Oench) and no one else even makes the top scoring leader charts. Their power isn't on offense, but on defense. They're third in the country, allowing just 1.27 goals per game.

Clarkson's Shea Tiley and Maschmeyer are fourth and fifth among goalies in the country. However, Maschmeyer has played half the games that Tiley has. She's also the reigning ECAC Goaltender of the week and broke the all-time Harvard saves record this week.

Harvard have held all but one opponent to two goals this season, so while Clarkson will need Cayley Mercer to continue her scoring ways, Harvard does tend to pick up speed in the second half.

↑Kelsey Koelzer -- The Princeton defender had four goals and an assist last weekend, including the Tigers' first hat trick by a defender since February of 2011.

↓Top-ranked teams playing in Grand Forks -- The Fighting Hawks have upset both Wisconsin and Minnesota in the first half, and are sitting at no. 9 in the Pairwise rankings.

↑North Dakota's Shelby Amsley-Benzie -- A big part of NoDak's success, Amsley-Benzie allowed just one goal in four games in December, all against higher-ranked, in-conference opponents. She stopped 103 shots, giving her a .990 save percentage and a .25 goals-against average for the month.

↑Minnesota-Duluth -- The Bulldogs have by far the toughest schedule of any team this season. Things started a bit rough for UMD, but they and first-year coach Maura Crowley were 5-1-1 to close out 2015. They'll be without Crowley on the bench as they head to Wisconsin this weekend -- she's an assistant with the US U-18 team that's competing in the Women's World Championships.

↓Wisconsin -- A loss at North Dakota ended the Badgers' perfect season just before the holiday break.

↑Quinnipiac's Taylar Cianfarano -- In the Rookie of the Year conversation for much of last season, Cianfarano has followed up a successful freshman campaign with an even better sophomore outing. She's already tied her goals, assists, and point totals from last season through just 18 games.