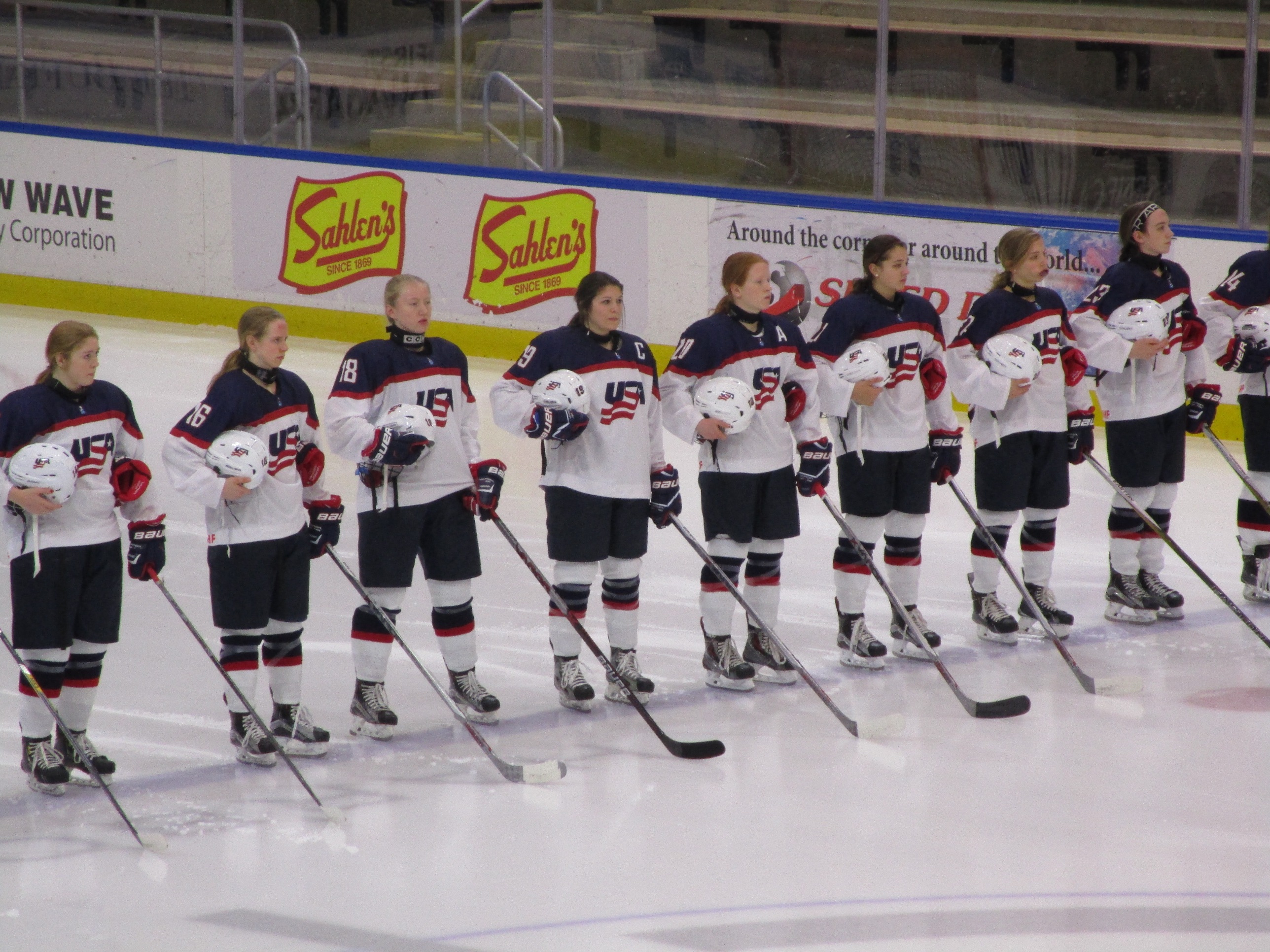 Onsite reporting from Buffalo and photo provided by Melissa Kania.

The Team USA U-18 team will head to St. Catharines, Ontario, Canada this week to defend their IIHF Women's World Championship gold medal.

The United States' U-18 team has played in the gold medal final each of the eight times this tournament has been contested, and has won four of them. They have not won two consecutive gold medals since 2008 and 2009, which were the first two years of the tournament.

St. Catharines is located just outside Niagara Falls and is about 40 minutes from Buffalo, NY and 75 minutes from Toronto -- it's directly across Lake Ontario from the province capital.

As the U18 team wrapped up its week-long training camp at HARBORCENTER in Buffalo, they faced a pair of exhibition games to help them prepare for the upcoming tournament.

The first came on January 3rd against the U-16 Buffalo Regals boys’ team. Team USA fell 5-0.The second, a few days later, came against the NWHL’s Buffalo Beauts.

The scoresheet may not reflect it, but Team USA looked good in both games and was especially sharp in the Beauts game. Though they fell to the professional team 3-2, the U-18 team seemed to have been put together pretty well.

Grace Zumwinkle had a goal and an assist, and the Americans got a chance to use both Beth Larcom and Alex Gulstene in both of the exhibition games. Both netminders made some spectacular saves against the Beauts and Regals.

Though the disparity between the Beauts and Team USA was evident at some points, Team USA was able to hold their own throughout much of the game and had a few good scoring opportunities.

That includes what could have been a great goal by Rebecca Gilmore, who took it in close to the net on a fantastic chance, but couldn’t get the shot off before she reached the goaltender.

Team USA put up a fair amount of shots on the Beauts, but Buffalo was more physically tough, which seemed to wear the Americans down toward the end -- despite the fact that Team USA was able to snag a last-minute goal.

Without trying to compare them to a pro team too much, Team USA generally looked like they were ready for the upcoming competition, and they certainly gave the Beauts a run for their money.

It’s hard to compare how they played against a professional team to how they’ll fare against other U-18 teams, since the styles of playing and levels of physicality are different, but it was a great opportunity to see some incredibly talented hockey players together on one sheet of ice.

Though not listed in any official capacity, Olympic captain Meghan Duggan tweeted earlier in the week about helping the team.

Happy to be in Buffalo this wk helping to prep the US U18 team for the #U18WWC starting Fri in St Catherines, ON! #questforgold @usahockey

Sixteen of the 22 girls on the roster are from the state of Minnesota.

Marshall has been named team captain, with Presley Norby and Alex Woken serving as alternates.

You'll remember Presley Norby as the U-18 player who was invited to participate in camp with the senior squad prior to the Four Nations Cup in November. A late injury to Emily Janiga left an open roster spot, and Norby so impressed coaches at camp in Chicago that she was given the final slot. Team USA won gold, defeating Canada 3-2.

Information on the tournament is spotty, but Norby played right wing on the top line with Jocelyne Lamoureux-Davidson and Meghan Duggan in the preliminary round game against Canada, and on the third line with Duggan and Hickel in the gold medal game, where she totaled about nine minutes of ice time.

Now she'll attempt to use that experience to lead the U-18s. Norby is committed to play at Wisconsin in 2016-2017. She had a goal and an assist at the 2015 IIHF U-18 WWC, and will look to improve on that total. The right-handed forward is small and quick, though she may find herself pushed around a bit. Twitter: @presleynorby

Patti Marshall, a right-handed defender, is committed to the University of Minnesota for the 2016-17 season. She's won two national championships and has one second-place finish as a member of the squad at Shattuck-St. Mary's. Her strong defensive play will anchor the US squad. Twitter: @pattimarshall16

Alex Woken (F) is playing in her second U-18 Women's World Championship, and brings both size and speed to the offense. She will join Marshall at Minnesota next season. A native of Fargo, ND, she has four goals and two assists in 11 games with the U-18s. Most recognizable by her bright red ponytail, Woken is quick on the ice and is Team USA's proven offensive threat. Twitter: @XelaNekow

Cayla Barnes (D) has committed to play for the Boston University Eagles in 2016-17. She is originally from Corona, CA, and is playing in her second U-18 Women's World Championship. Twitter: @Cayla_barnes27

Sydney Brodt (F) has committed to the University of Minnesota-Duluth for the 2016-2017 season. She's played just three games with the U-18 team at the series with Canada earlier this year. Heading into this high school season, she had 63 goals and 74 assists for her high school team. Twitter: syd14brodt

Emily Brown (D) is a Blaine, MN native who verbally committed to play for Minnesota as a sophomore. She was an alternate on the US women's national U18 team that won the gold medal in 2015. Brown has seven goals and 15 assists on defense for the Blaine team that won the MN section 5AA championship. Twitter: @ekbrown05

Jesse Compher (F) is from Northbrook, IL. The forward is committed to Boston University and is captain of the U19 AAA Chicago Mission team that won the 2015 National Championship. Her brother JT plays at Michigan, and his rights are owned by the Colorado Avalanche. Twitter: @JessComph7

Rebecca Gilmore (F), from Dedham, MA is committed to play at Harvard. She has eight goals and nine assists in 19 games played with the U-18 team. In 2015, she tied for the tournament lead in scoring with nine overall points. Her seven assists were best in the tournament.

Alex Gulstene (G) plays at North American Hockey Academy (NAHA). The goalie is committed to play at Minnesota in 2017-18. She appears to have dual citizenship, and is listed at times as being from both Vancouver and a Chicago suburb.

Taylor Heise (F) scored one of the team's two goals in the warm up against Buffalo on Tuesday. It does not appear that she has committed to a college yet. She has 30 goals and 49 assists as a sophomore at Red Wing High School in the Minneapolis suburbs. Her 29 goals this season are good for fourth in the state, while her 49 points have her in third place.

Crystalyn Hengler (D) is committed to Minnesota for the 2018-2019 season. The sophomore defender has nine goals and 12 assists thus far in her high school season with Eden Prairie. Twitter: @crystalynhockey

Makayla (Mac) Langei (D) is commited to play at Bemidji State for the 2017-18 season. From East Grand Forks, North Dakota, she currently plays at Shattuck St. Mary's with Marshall, Alex Woken and Grace Ostertag. If her prep penalty minutes are anything to go by, she's a physical defender who's not afraid to get after the puck. Twitter: @makknows

Emily Oden (F) has 12 goals and five assists through the first 16 games of the season. She does not appear to have announced a college commitment yet. Twitter: @emilyoden16

Gracie Ostertag (D) won a national championship with the 16U Shattuck St. Mary's team. The Shakopee native is committed to Minnesota and had the assist on the game-winning goal. Twitter: @GracieOstertag

Catherine (Catie) Skaja is a forward from New Prague, MN. She is committed to the University of Minnesota.
Twitter: @catie_skaja

Natalie Snodgrass (F) is from Eagan, MN and is committed to Connecticut. Has 29 goals and 18 assists last year for her high school team, including six goals and five assists in the playoffs. Twitter: @nataliesnod9

Taylor Wente (F) had two goals in three games played in the series against Canada in 2015. She is committed to Minnesota and leads the Maple Grove High School team, with 15 goals and 18 assists in 17 games played. Twitter: @Taylorwente

Madeline Wethington (D) won a state championship two years ago and was a runner up last year. Her mother Kerry was the first women's hockey coach at St. Cloud State University. Not currently committed to a college.
Twitter: @mwethington5

Grace Zumwinkle (F) is committed to Minnesota. She's scored 23 goals and 14 assists in 28 games, including eight goals in three playoff games as a freshman. Was named to the 2014-15 MN All State Team.

Team USA will open the tournament on Friday with a game against Czech Republic at 4 PM EST. They play Russia at 4 PM EST on Saturday and face rival Canada Monday, January 11 at 7:30 pm EST.

It appears that games will be streamed on FastHockey.com. FastHockey does require you to create an account and costs $26.99 for a one-month subscription to their paid content, though the streams for this particular tournament do not currently seem to be behind their paywall (indicated with a dollar sign icon).

At about 4:40, Jocelyne Lamoureux talks about her work with Team USA as a strength coach. Here, Meghan Duggan interviews Patti Marshall.

Disclaimer: A lot of information about players so young is contradictory and difficult to find (which is probably a good thing, since they are young teenagers). Everything here is correct to the best of our knowledge, but if you have a factual correction, please tweet it to @thevictorypress.