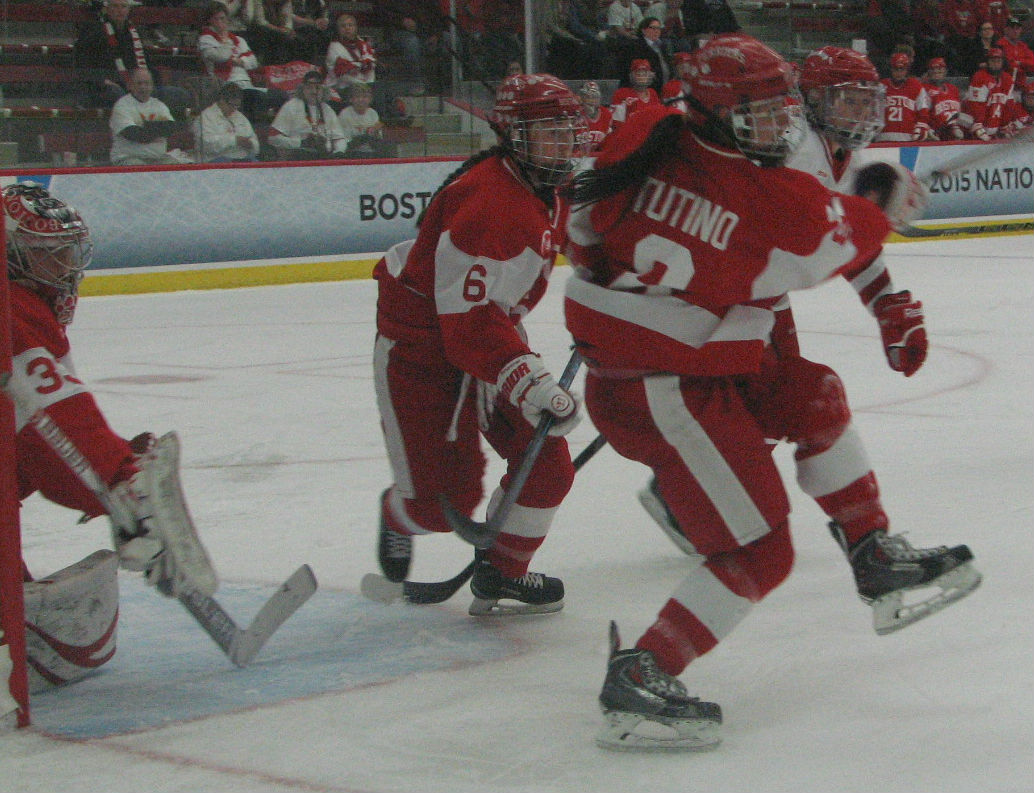 Watch and listen: Video is available online from the Ivy League Digital Network. It's $10.95 for one month of Harvard coverage.

The bottom half of the polls have seen little stability through the first half of the season.

It might be fair to term Colgate a bit of a surprise thus far. Projected to finish in the bottom half of the ECAC, they've upset Clarkson and tied Quinnipiac. But with six ties already through 19 games, the Raiders need to find a formula for overcoming that last hurdle and putting teams away.

Harvard played in the national championship game last season. Despite losing a close-knit and seasoned senior class, most believed the Crimson would be a threat once again this season. But inconsistent play has put them third in the ECAC.

Watch and listen: Video is available online from BU on TerrierTV from College Sports Live. It's $9.95 for a month subscription.

Boston College is the lone unbeaten team left in women's college hockey. The bullseye on their back continues to grow, though a glance at their remaining schedule doesn't show it to be too scary for the Eagles.

BC fans will tell you that they've been saying "this is the year" for a few seasons now as the program has brought in high-end talent. Losing to Harvard in the national semi-final last season did not sit well with them.

Coach Katie King Crowley said all the right things about her team focusing on one game at a time. For the Eagles, it's pretty much "same old, same old" as they coast through Hockey East. This year, though, they're used to teams targeting Alex Carpenter. They're used to the attention and the pressure, and they know both the anticipation of making it to the Frozen Four and the disappointment of heading home early.

And that, Crowley said, might be the biggest difference for this year's squad. There's no surprises. They know other teams are gunning for them and they have experience handling it.

Boston University is still struggling to find its footing in a post-Poulin world. Certainly, the Terriers would love to upset their rivals and put the first chink in their armor. The Boston schools are a month out from the Beanpot, where anything can happen, so BU would love to strike early.

BC is the better team this season, but that rarely matters when two rivals meet up. BU needs a big outing in net from Victoria Hanson, whose GAA is above 3.5.

↑Kelsey Koelzer -- The Princeton defender had four goals and an assist last weekend, including the Tigers' first hat trick by a defender since February of 2011.

↓Top ranked teams playing in Grand Forks -- The Fighting Hawks have upset both Wisconsin and Minnesota in the first half and are sitting at no. 9 in the Pairwise rankings.

↑North Dakota's Shelby Amsley-Benzie -- A big part of NoDak's success, Amsley-Benzie allowed just one goal in four games in December -- all against higher-ranked, in-conference opponents. She stopped 103 shots, giving her a .990 save percentage and a .25 goals against average for the month.

↑Minnesota-Duluth -- The Bulldogs have by far the toughest schedule of any team this season. It started a bit rough for UMD, but they and first year coach Maura Crowley were 5-1-1 to close out 2015. They'll be without Crowley on the bench as they head to Wisconsin this weekend -- she's an assistant with the US U-18 team that's competing in the Women's World Championships.

↓Wisconsin -- A loss at North Dakota ended the Badgers' perfect season just before the holiday break.

↑Quinnipiac's Taylar Cianfarano -- In the Rookie of the Year conversation for much of last season, Cianfarano has followed up a successful freshman campaign with an even better sophomore outing. She's already tied her goals, assists, and point totals from last season through just 18 games.