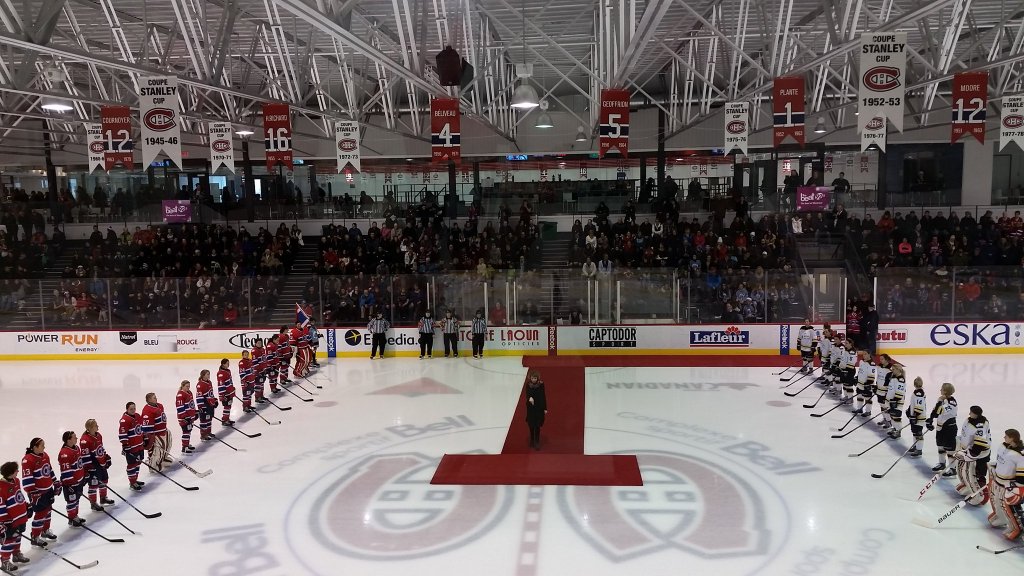 The CWHL resumed its season with a few big games, including an outdoor exhibition match between Les Canadiennes and the NWHL's Boston Pride. But just after that game, the Thunder and Furies faced off in the CWHL's televised You Can Play game. Meanwhile, the Blades and Les Canadiennes engaged in a couple of contests to continue the Montreal-Boston rivalry at the Bell Sports Complex, the NHL's Canadiens' training facility.

The Women's Outdoor Classic, a 30-minute exhibition, ended in a 1-1 tie.

"I think we stuck to the game plan and we were able to get some good shots in the slot, so we did move the puck well," Les Canadiennes assistant coach Lisa-Marie Breton-Lebreux said. "We were quick, so we used our strength.

"Some of our strengths are speed and moving the puck really fast out of the breakout or in the O-zone. Because of our speed, we’re able to get to the puck.”

On Saturday, Kim Deschênes gave Les Canadiennes the lead in the first. Caroline Ouellette scored in the second, while Ann-Sophie Bettez added two tallies. Charline Labonte made 12 saves in the win, while Genevieve Lacasse stopped 51 for Boston.

"We’d like to work on our execution," Breton-Lebreux said. "We’re quick to get to the puck, but [we need] more stick-to-stick passes, receiving a pass, having a good shot off a pass, all of those. Power play execution, how the puck goes around, all of that. That’s something we’re going to work on in the next few weeks, for sure."

"I thought we defended, probably played one of our better games defensively especially the second night," Blades coach Brian McCloskey said. "On Friday night, for sure, Gen Lacasse, our goaltending, even though she gave four, she really had to make a lot of quality, quality saves to keep that number at four.

This was the sixth and seventh times this season the Blades were shut out.

"We're offensively challenged so that’s not something you can just wish away. That’s just a fact of the makeup of this team -- we just don’t have a lot of natural goal scorers," McCloskey said.

"Labonte is a great goalie, played both games and even though we didn’t pepper her...we had some really high quality shots in especially the second game."

The Thunder also earned a sweep, beating the Furies 3-0 on Saturday and 5-4 on Sunday.

"Our defense is really strong," Fines said. "They’re starting to shoot the puck more so we’re creating more opportunities for ourselves. Just starting from the back end, making sure we get a good first pass. And speed through the neutral zone.”

"I wasn’t happy with this weekend, so it was a tough weekend for me to digest," Toronto coach Sommer West said. "I think some of our bright spots were we did create a lot of chances offensively, and defensively, I thought we did a pretty good job on for the most part in the games."

The next day was much different, with the teams trading goals for most of the game. Backed by an excellent penalty kill, the Thunder came away with the win. Fielding Montgomery struck first with a shorthanded tally as Brampton dominated the play. While Carolyne Prevost scored about 11 minutes later, Montgomery added her second shorthanded goal to put the Thunder up 2-1.

In the second, Natalie Spooner scored and Prevost added her second to give the Furies a lead. While Brampton pressed, they were unable to solve Sonja van der Bliek, who made her third start of the season.

"I think turning the puck over at the blue line was something that was hurting us and just being a little bit indecisive with the puck, but that happens," Fines said.

In the third, Sarah Edney, Jocelyn Larocque and Laura Fortino scored from Brampton en route to the 5-4 lead. Van der Bliek made 34 saves, while Liz Knox made 31 for Brampton.

"Our compete level isn’t high enough right and now and other teams are dominating us because we’re not willing to battle for 60 minutes. We just come and go in the game, and that’s unacceptable at this level," West said.

There are no new updates on Toronto's Jenelle Kohanchuk and Julie Allen.

↑ Sonja van der Bliek: Van der Bliek managed to keep the score close, despite Brampton carrying much of the play on Sunday.

"I don’t think [Sunday] was one of her strongest games. I think she struggled with the puck and with her rebounds yesterday and I think that’s ultimately what kind of got to her, letting in a couple weak goals yesterday," West said.

"I think she’d be the first to admit that she wasn’t happy with her game yesterday but I think she battled well throughout the game...I think Sonja battled well and I wouldn’t hesitate to have her back in the net. I think she’s a good goaltender and you know could eventually become a No. 1 in this league."

↑ Women's hockey outside: Earlier, I published a piece about the Women's Outdoor Classic and how I was disappointed with the delayed announcement, the overall structure of the event, and the lack of PR on the NHL side. I still am, because I believe that we should expect and push for the best. But even though this event could have been monumental for women's hockey exposure but still fell short, there was still something undeniably magical about stepping out to Gillette Stadium with the cold air and untainted sound of skates on open ice.

↑ Les Canadiennes and bonding: Les Canadiennes have had quite a week. They were in Boston to face the Pride at Gillette Stadium, traveled home to face the Blades on Saturday and Sunday at the Bell Sports Complex, and then faced Canada's U18 team on Monday.

"From the classic experience, the Winter Classic was just amazing. As a team we really bonded a little bit, a lot more," Breton-Lebreux said.

"Just the game itself was such a high, such a rush, everybody was so happy...Just to go on the ice, the girls were smiling. After that we had a little celebration together. And the next day watching the Canadiens game...We’ve been together for a while. I think the experience at the Winter Classic was just amazing and coming off of that it was just, we were not tired. Emotionally we’re still on that cloud. I think that’s one of the reasons why we did well this weekend as well.”

Facing the Pride as well as Canada's U18 team game Les Canadiennes a chance to test themselves against different opponents.

Since the U-18 game was an exhibition match, Les Canadiennes practiced 5-on-3s, power plays and penalty kills.

"It was more like a controlled scrimmage and we were able to get a lot of power play work out of it so that was a very good practice," Breton-Lebreux said. "The young girls are really quick, they’re so fast so for us having to execute faster and faster was good practice for sure."

↓ Women's hockey exposure: The NHL had a great opportunity to promote women's hockey at the Women's Outdoor Classic on Thursday, but failed to take advantage of it. There was minimal promotion on any NHL social media channel and no broadcast or live stream -- taking away the potential of bringing new fans to women's hockey.

↓ Injuries: I've been a hockey fan for nine years. I've covered hockey for five, and the one thing I hate the most about watching hockey, about being a fan, and especially about covering it, are injuries.

↓ Boston's offense: The Blades were shut out in both games over the weekend. That marked the sixth and seventh times this year that Boston was shut out. The Blades have the league's most anemic offense, but it's understandable, given the offseason departures and young roster the Blades are carrying. It's really tough for Boston to score because they rarely have the puck.

"We’re offensively challenged, so that's not something you can just wish away," McCloskey said. "That's just a fact of the makeup of this team, we just don’t have a lot of natural goal scorers."