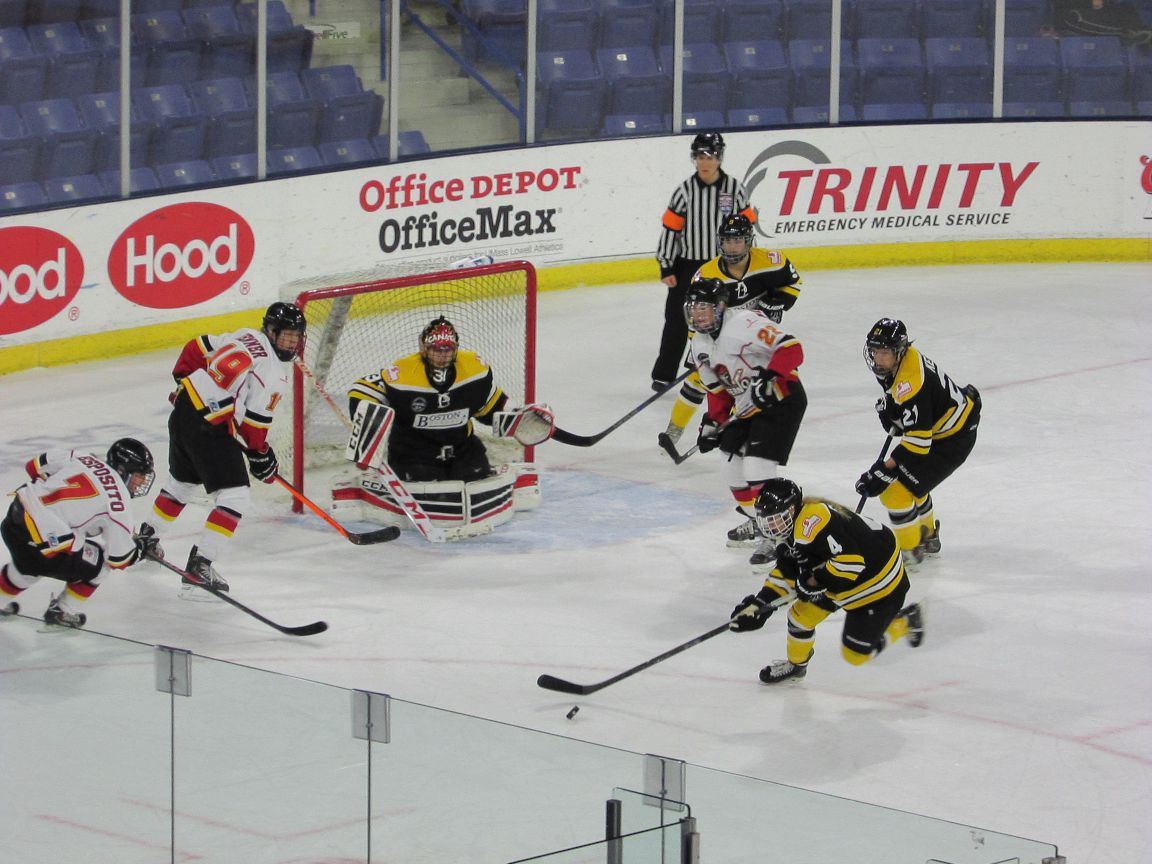 The Inferno and Blades matched up for their second series in as many weeks. Calgary, one of the CWHL's top teams, proved to be too much for Boston in the first two contests, and shone again last weekend.

For Boston, Megan Shea and Kristina Brown scored on Sunday. Genevieve Lacasse started both games as well, making 53 saves on Saturday and 46 saves on Sunday.

“I think we’ve made some strides. Against a team like Calgary, you’re playing without the puck for long stretches of the game because they’re quick and they’ve got some phenomenal puck-control individuals," Blades head coach Brian McCloskey said.

"Overall, I felt like [over] the weekend we did make some good improvements, primarily in the areas without the puck, though.”

For Boston, Sunday's 4-2 loss marked the closest game for the Blades against the Inferno in four contests.

"Sunday we came back and I [felt] We played better overall...[We] had a couple of chances to make it a one-goal game," McCloskey said. "We’re not going to become a scoring machine overnight, but I thought we did a better job on Sunday, and we certainly have to get better.”

Calgary is now undefeated on the season, while the Blades remain winless in regulation. The Inferno also have the league's leading scorer in Elana Lovell.

"Having seen that team four times in a row, it’s pretty obvious that there was a talent imbalance there," McCloskey said. "They’re probably as skilled a group as we’ll see. I find it hard to believe anybody’s going to be much deeper than they are.”

Les Canadiennes returned to play against Toronto after a bye week, and defeated the Furies 5-1 and 5-2. Montreal's team is now 4-0 on the season, one of two undefeated teams in the CWHL.

"It was something to see the team's ability to drive and win the battles kind of all over the ice," Les Canadiennes general manager Meg Hewings said.

For Montreal, Kim Deschênes had three goals and Ann-Sophie Bettez had two goals. The goaltending saw a slight change, with Sydney Aveson earning the Sunday win in her first start of the season. Charline Labonte earned the victory on Saturday.

"Even our coach was saying it’s really rare in his career that he’s seen a team be able to be so consistent and drive so hard for the three periods," Hewings said. "We’ll use that game as a model for the kind of intensity that we want to see throughout the season.”

On Saturday, Toronto gave up the first two goals before Caroline Ouellette cut it to 2-1.

“I think on Saturday we had spurts of good energy with spurts of good things that had happened," Toronto coach Sommer West said. "But we lacked consistency on Saturday and we lacked being efficient with our energy. Near the end of the game, we just didn’t have enough in the tank to finish. But overall, I was happy with [the] majority of the game, keeping it 2-1 for so long. We were just a shot away.”

Toronto took the ice with a shortened bench, as they were missing Kelly Terry, Natalie Spooner, Julie Allen and Jenelle Kohanchuk. Christina Kessler, who stopped 36 shots on Saturday, also missed Sunday's game with an injury.

“I think after Saturday's performance, the girls came back out Saturday and we gave a great effort," West said. "We played really well and again we were just a shot away from taking the lead or tying the game up, and I was happy overall with our performance on Sunday."

Olivia Ross started her only game of the season that day, and made 29 saves in the 5-2 defeat. Kori Cheverie, Carolyne Prevost, and Ashton Hogan scored for Toronto over the weekend.

“I think Kori Cheverie had a great weekend...she stepped up and played a great role," West said. "I think on Saturday, on both days our goalies were phenomenal and really kept us in both games."

Toronto Furies: West said there is still no update on Jenelle Kohanchuk and Julie Allen.

"Julie Allen, I mean with surgery you’ll never know," West said. "With Kohanchuk, we have no timeline yet. It’s a day-to-day thing."

Boston Blades: Per McCloskey, Sadie St. Germain has a "tweaked knee" and might return in a week or two. As of Monday, St. Germain had not visited a medical professional, so McCloskey said he wasn't 100 percent sure of the timetable for her return.

↑ Genevieve Lacasse: Boston's defense, and the team as a whole, have struggled, and as a result, Lacasse has faced many shots since the season's inception. She has a .917 save percentage, but her 275 saves rank first the CWHL.

↑ Calgary: The Inferno were supposed to be the best team in the CWHL, although no one was sure how the team would translate from paper to ice. Right now, Calgary has the most explosive offense and depth in the CWHL. Granted the Inferno have only played a very young Boston team, but Calgary has outscored the Blades 22-4 in four games.

↑ Kim Deschênes Deschênes was the leading scorer for Les Canadiennes over the weekend. She netted two goals and two assists on Saturday and added two goals on Sunday.

"[She's] hitting her stride; she came away with six points over the weekend. She was our top draft pick in 2014 and had a little bit of an adjustment I think coming from university play last year," Hewings said.

"But she’s really proven that she’s an incredible power forward and has a lot of similar skills, a lot of mobility. [She] kind of reminds me a lot of [Caroline] Ouellette actually, but she’s young. [She's], as they say, hitting her stride and is a really mature player and sees the game well."

↓ Toronto's bench: The Furies already began the season shorthanded, thanks to the noticeable absences of Jenelle Kohanchuk and Julie Allen. Both Kelly Terry and Christina Kessler missed playing time due to upper-body injuries, and Natalie Spooner was with Canada's national team. In all, Toronto dressed 17 players on Saturday and Sunday.

↓ Boston's transition defense: The Blades have struggled in limiting scoring chances on goals in transition. While McCloskey said the Blades have been improving, this continues to be an area of weakness.

“That’s been a big concern for us. For the majority of the game on Sunday, I thought we did a much better job in terms of not turning the puck over in dangerous areas," McCloskey said.

"I thought on Saturday in the second period that’s when we sort of fell apart. We just got very careless with the puck and they really made us pay, because they can execute on turnovers as well as any team in our league."

↓Scores representing the game: All four games featured at least a two-goal difference. However, some games were closer than the scores indicated, like Toronto's 5-2 loss and Boston's 4-2 loss.

Both Les Canadiennes and the Inferno are powerful teams. But the Blades kept Calgary scoreless for three periods on the weekend, while Toronto kept Les Canadiennes to a 2-1 lead for much of Saturday's and Sunday's games.

The teams are on break for the Four Nations Cup and the CWHL's schedule resumes on Nov. 14.