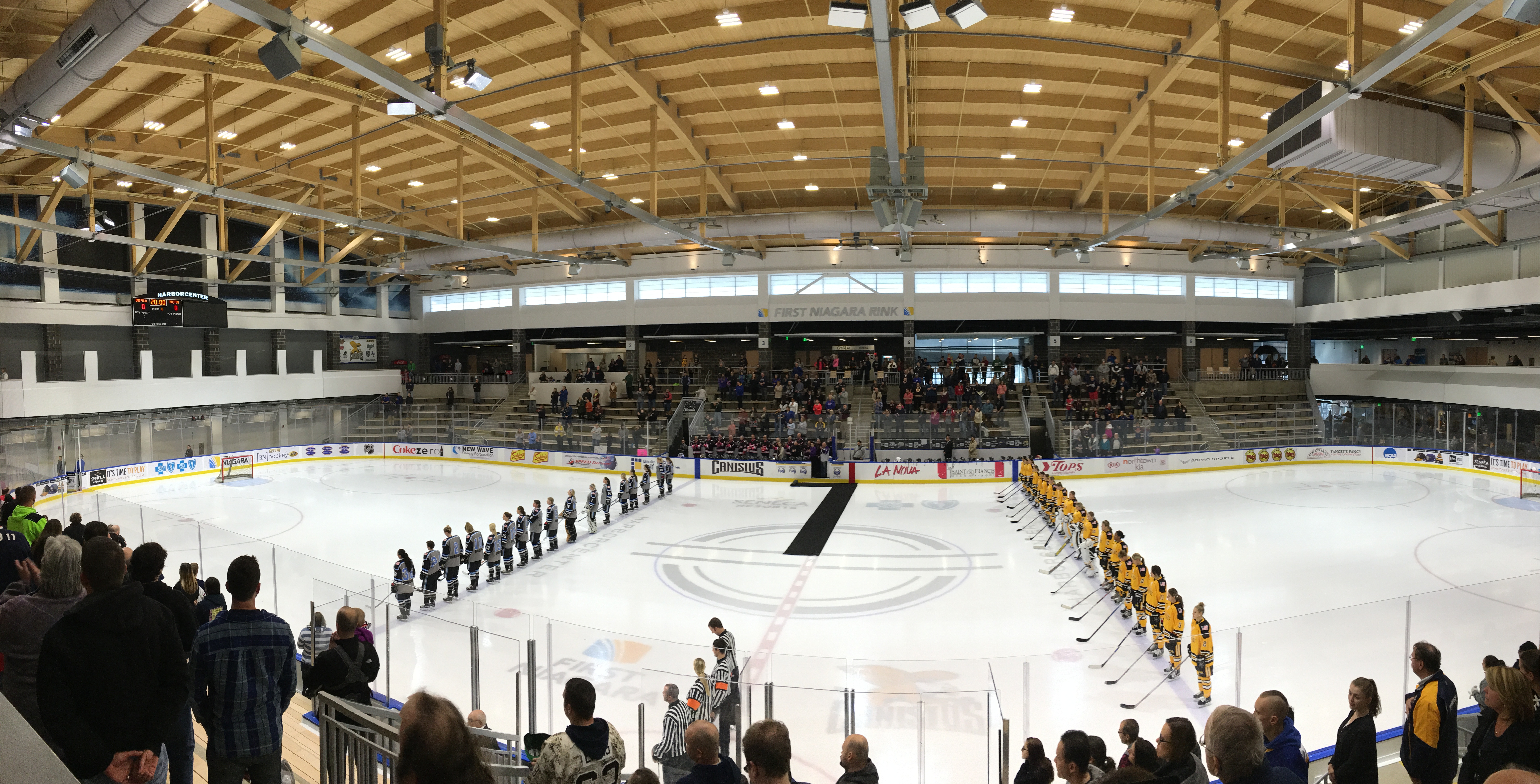 The first hat trick in NWHL history, over 70 shots on goal, one penalty shot and more — that’s what composed much of the afternoon for the Buffalo Beauts and the Boston Pride as the teams faced off in a rematch of their season opener, where the Pride came out on top 5-3.

Boston, a strong team to begin with, opened the game with some good early pressure. They registered 11 of the first 12 shots of the game, limiting Buffalo’s chances and peppering Beauts netminder Brianne McLaughlin with shot after shot. Though Buffalo had a few good chances early, including several shorthanded opportunities, the puck simply didn’t hit the net.

Though the shot count told otherwise, the opening period between the Beauts and Pride was fairly evenly matched. Near the close of the first twenty minutes, it would be Boston who would take the well-deserved lead on Brianna Decker’s first of the afternoon. Decker took the puck high over McLaughlin’s left side, over her shoulder and in, to give Boston the 1-0 lead.

The Beauts weren’t out of it, though, as Kelley Steadman scored her third goal of the season to tie the the game at one. Steadman tried to put it in high on Pride netminder Brittany Ott; when that failed, she continued the effort and was eventually able to shove it in.

However, Emily Field would soon give the Pride a go-ahead goal. Decker added her second of the afternoon shortly after that, quickly making it a 3-1 game in Boston’s favor. The Pride notched two goals on four shots early on in the second period. Meanwhile, the Beauts struggled; every time they were able to put an effort together, it resulted in an offsides call.

The second period also saw the first penalty shot against the Beauts, as Boston’s Kelly Cooke had a chance to help put the game away. Once again, McLaughlin was a brick wall in net to keep the Beauts down by just a pair and to keep them in the game.

Once again, it was Steadman playing the hero for the Beauts, notching her second of the afternoon and team-leading fourth of the season. Her second goal -- a shorthanded tally -- came after another near-goal; she fought to get the puck back and made sure it got in the back of the net the second time.

The teams would once again trade goals in the third period, as Gigi Marvin potted one to make it 4-2 before Kourtney Kunichika scored her first NWHL goal to put the Beauts back within one on the power play.

According to co-head coach Ric Seiling, Kunichika was one of a few Beauts players who missed last week’s practices with a flu bug that had spread around the locker room. Her first time on the ice this week was for Sunday’s game, but with a two-point performance, the time off clearly didn’t hurt her too much.

The Beauts had a late power play with just over six minutes remaining in regulation, but couldn’t take advantage of the chance to tie things up. A late penalty by Kunichika (hooking) left the Beauts with a 5-on-4 situation that they remedied by pulling McLaughlin, and the Pride got the fifth goal as Decker had the empty-net tally for the first hat trick in NWHL history.

Decker was named first star of the game for her hat trick, while Steadman’s pair put her in for second star of the night. Buffalo’s Paige Harrington was named third star.

Another star of the afternoon, however, had to be Beauts goaltender McLaughlin, who registered 44 saves. McLaughlin was an absolute workhorse for the Beauts, sliding through the crease and doing whatever she could to make save after save. What could have easily been a runaway game for the Pride was kept close due in large part to McLaughlin’s strong performance in the pipes.

McLaughlin has consistently faced a high volume of shots this season, but it’s no trouble for her. After the Beauts’ first game, she said that’s a comfortable position for her, as she’d rather stay busy than not. She reiterated that statement after Sunday’s game.

Decker now leads the NWHL in goals, with five on the season, including Sunday afternoon’s hat trick. Steadman, with four, is second in the league in that category.

Selling called Steadman “a force on the ice,” with other players echoing that sentiment. McLaughlin described her as a “really talented player," while Seiling added that she’s “a big part of this team.”

"You just give her the puck in front of the net and she's going to find a way to put it in," McLaughlin said.

Steadman was signed as a practice player, since at the time of initial player signings, she was unable to fully commit to the time that the Beauts required.

The Pride beat Buffalo 4-1 in the season opener before shutting down the New York Riveters 7-1 the week after. Putting Boston in such a close position -- a potentially uncomfortable one -- is one high point that many of the Beauts will take out of Sunday’s loss.

“We kept pressing, playing the game, sticking to the game plan and creating opportunities,” Seiling said.

“We wanted to be the first ones to give them a game,” McLaughlin added. And give them a game they did; the two-goal win is the closest any team has to come to defeating the Boston Pride so far in this young season.

With the upcoming Four Nations Cup, the NWHL’s next games won’t come until November 15th. This three-week gap between games will give the Beauts a chance to regroup before hosting the Connecticut Whale for the second time.

“It’s going to give us time to continue to work on certain things in our zone and the offensive zone,” Seiling said.

While several of the Beauts, including McLaughlin, will head overseas for the tournament, the rest will continue to hit the ice on their own time to keep things rolling as the NWHL season continues.

Of course, the Beauts are still missing several players due to visa issues. Lindsay Grigg, Erin Zach, Devon Skeats, Jessica Fickel, and Amanda Makela are all out of the lineup due to the visa issues. The NWHL is reportedly working around the clock to fix that.

Either way, many of the Beauts players seem to agree that the team is continuing to grow and meld.

“I think we knew from the beginning that we were going to be the team that progresses as the season goes along,” Steadman said. “We’re not going to come out and win every game, but I think as the season moves forward, we’re getting better every game."

"It feels like we're starting to come together as a team. It's exciting to be a part of," Harrington said.

If there’s one thing to remember about the Buffalo Beauts heading into the rest of the regular season, it’s epitomized in this quote from the defender:

“We’re a tough team. We shouldn’t be taken lightly.”