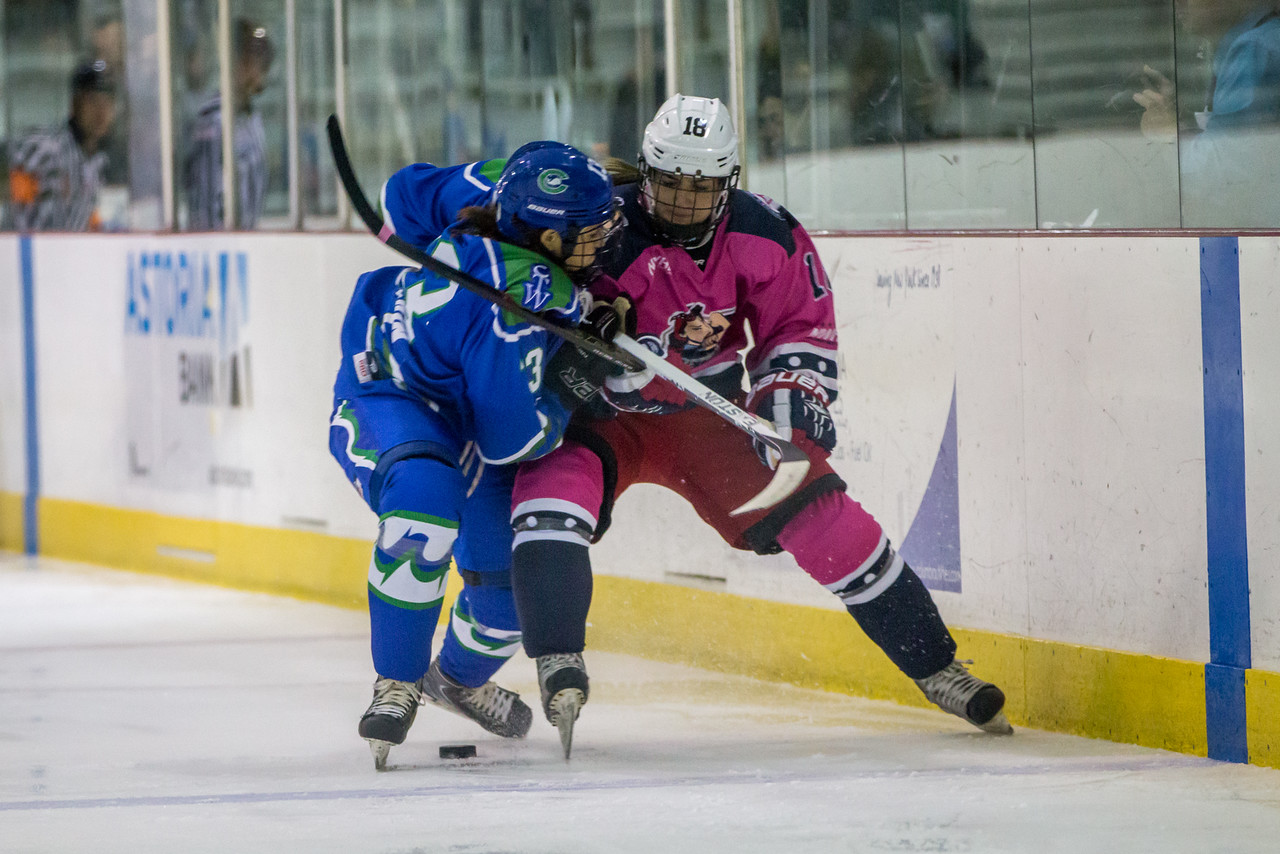 While the score sheet still shows a loss, the Riveters came away with something to build on after Sunday night's final horn. It was their closest game of the season, both on the score sheet and in terms of their actual play.

New York failed to capitalize on two early power play chances, as both the Whale defense and goaltender Nicole Stock were excellent at the beginning of the game. Connecticut's Alyssa Wohlfeiler would get on the board first, also on the power play, with Lyudmila Belyakova in the box for hooking. The Riveters started with a strong penalty kill, as Elena Orlando and Madison Packer even generated a quality chance while shorthanded. Wohlfeiler would bury it behind Nana Fujimoto after a strong shift, cycling in the offensive zone towards the end of the penalty and putting the Whale up 1-0.

New York played strong defense after the goal, getting sticks in passing lanes to prevent further scoring chances, even as Belyakova took another penalty. They would go to the second period down by just a single goal.

In the second, the Riveters would get on the board, making the most of a 5-on-3 opportunity when both Kelli Stack and Sam Faber took penalties. Ashley Johnston and Meghan Fardelmann played catch up high and kept the penalty killers mobile, allowing Johnston to rocket a perfectly placed shot past Stock, tying the game at 1 and leading to an emotional celebration near the Whale blueline for the Riveters.

It could have easily been the beginning of a comeback. The Riveters went on to outshoot the Whale in the second period 8-3 -- not a high shot turnout in the middle frame by any standards, but Stock stopped everything she came up against for the rest of the game. Fujimoto was better insulated by the Riveters' defense in this game than in any previous tilt, as the Riveters kept many rushes by the Whale to the outside.

Early in the third period, the Whale were able to pull ahead, again on the power play, with Gabie Figueroa in the box. Kaleigh Fratkin scored on a big slapshot from the point with traffic in front, bringing the score to 2-1.

New York stayed strong defensively and were even able to mount some pressure in the offensive zone, but when they pulled Fujimoto, Kelly Babstock was able to carry it down the ice for an empty-net goal. The Whale held on for the 3-1 decision.

Some notes and observations:

The tide may yet turn for the Riveters this season, but they will have to wait. As both women's professional leagues head into a short break in their seasons to accommodate the Four Nations Cup tournament, Brooklyn's team can reflect on their strongest performance of the year...but they probably wish they could carry some momentum into next week instead of waiting to face the also-undefeated Boston Pride on November 15.