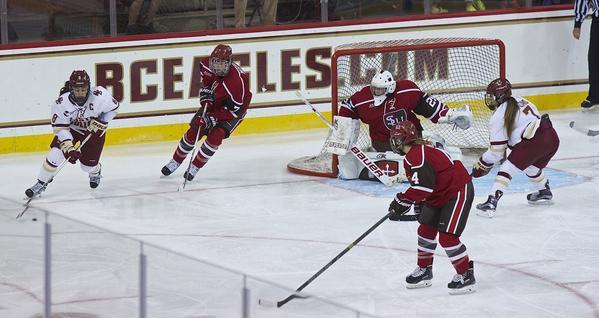 Come back each week for a breakdown of the most interesting weekend games, how to watch or listen to them, and some thoughts on the movers and shakers of the previous week.

Bemidji State has started the season determined to prove that they aren’t just an upstart, but a program that's looking to be established at the top of the WCHA. They swept Minnesota-Duluth -- including an overtime winner last week.

Though still undefeated, it hasn’t been particularly pretty for North Dakota. The #6 team in the country had narrow one-goal wins against RPI and Minnesota State-Mankato each of the past two Fridays. This is their third straight road Friday game; maybe the travel is to blame for the Friday outcomes, but they need to use the early season to figure out these problems. Bemidji will be a tough test for NoDak.

Friday and Saturday video available for $9.95 for the month.
(Fans with a ticket for the BU Men’s opener against Wisconsin can get free admission to Saturday’s women’s game)

BU was upset by unranked Penn State last Friday. The Nittany Lions scored less than a minute into the game. BU made it 3-2, but let PSU score twice in the opening minutes of the third period. They’re not seeing big contributions from Sarah Lefort and Kayla Tutino up front, which is something they’re going to need if they have any shot of staying as competitive as they were with Marie-Philip Poulin. Though she’s the biggest departure, BU lost a lot on defense and that crack in the armor was exposed against Penn State. They need to shore up the blue line and Clarkson is going to test them.

Despite the higher ranking in this matchup, Clarkson is just 1-5-1 all time against Boston University. Both teams have some things to prove, making this an even more interesting matchup.

↑ St. Lawrence - The Saints put four goals on #2 Boston College this past weekend, something that’s happened just three other times in 2+ seasons. They also had #5 Clarkson down 2-0 heading into the third period of their matchup two weeks ago before letting the game slip away in the third period.

↑ Lindenwood - The Lions had a minor upset when they took down Northeastern Friday night. Lindenwood has been defined by goalie Nicole Hensley and having her steady in net has given the opportunity to be in games. But Hensley wasn’t in net for this game and Lindenwood still took down a team that should finish second or third in Hockey East.

↓Northeastern - I picked Northeastern to take the second spot in Hockey East, but until they can find someone other than Kendall Coyne to put the puck in the net, I don’t see it happening. They squeaked by Syracuse on Friday and lost to Lindenwood on Saturday, and as a result, the Huskies have some more to figure out. Lucky for them, it’s been an equally unsteady start from Boston University, the team most likely to battle them for the second spot.

↓Ohio State - It was a rough welcome back to the WCHA for new head coach Jenny Potter, as the Buckeyes were swept by Wisconsin and out-scored 15-0 in the series. Highly touted freshman Jincy Dunne has yet to take the ice for OSU. Ohio State has Minnesota at home this weekend, so it’s unlikely the path will get any easier for Potter and her team.

↑BC senior Alex Carpenter - The reigning Patty Kazmaier winner tallied her 200th career point on Sunday. She leads the country with 13 points on eight goals and five assists in four games played, with two hat tricks this season already.

↑Wisconsin sophomores Annie Pankowski and Emily Clark - Clark is the reigning WCHA Player of the Week and was named to the Team Canada Four Nations roster this week. She had a seven-point weekend, scoring four goals and tallying three assists. Her second goal on Saturday was #4 on that night’s Sportscenter Top 10. She took the title from Pankowski, who is second in the country with 11 points on seven goals and four assists, including three short-handed goals.

↓Taylor Crosby - Sidney’s little sister transferred from Northeastern to St. Cloud State and had a rude welcome to the WCHA when she faced Minnesota Saturday. She let in five goals and made one save in 14:38 before being pulled. Those will be difficult stats to recover from, but hopefully Taylor can find some footing up in St. Cloud.