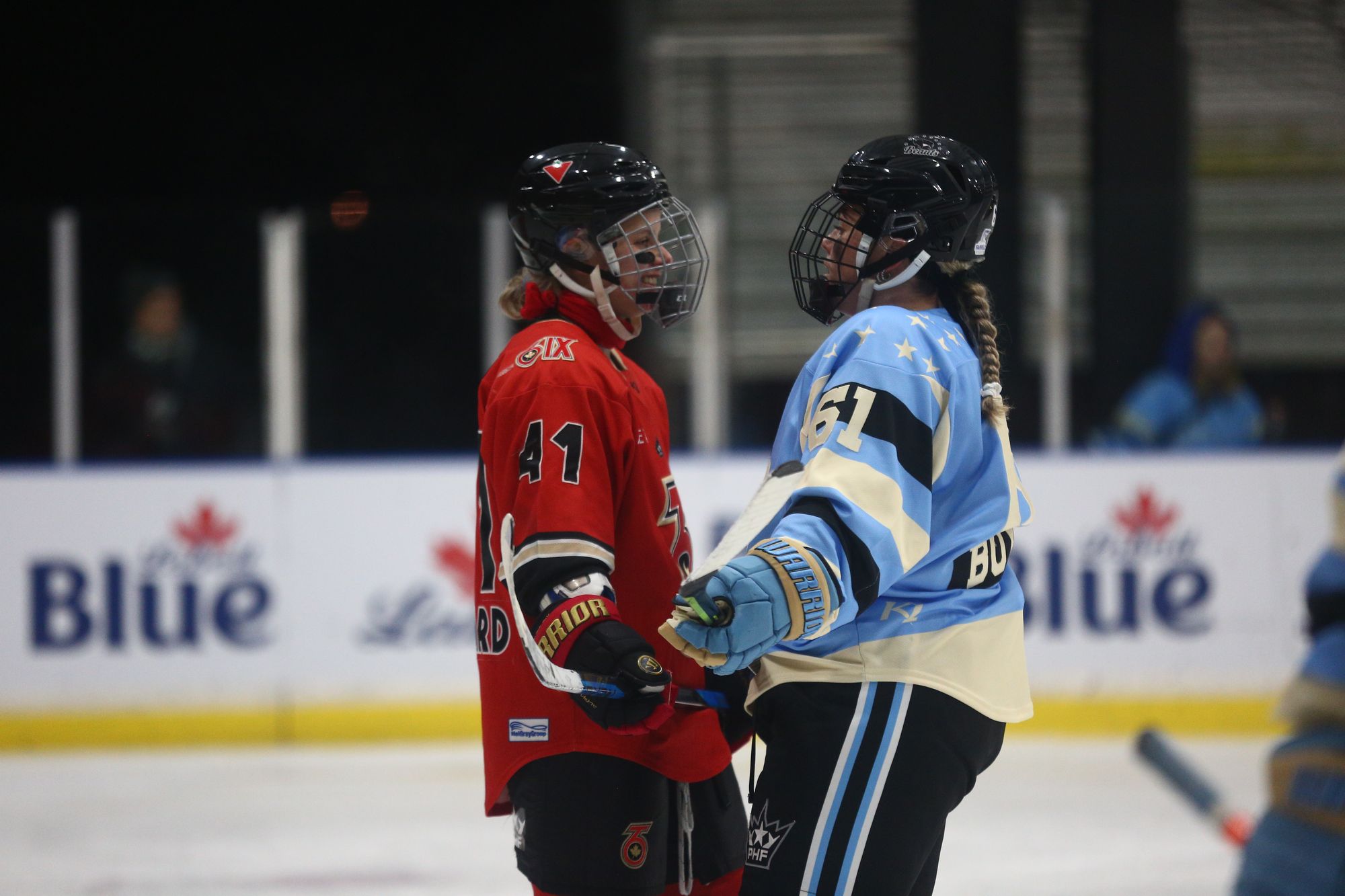 For the third time in PHF history, the Buffalo Beauts hosted an outdoor regular-season at Buffalo Riverworks. With 34-degree Fahrenheit weather as the puck dropped and a light snowfall as the game went on, the covered rink provided the perfect setting for the third annual Buffalo Believes Classic.

The action on the ice was very much tilted towards the Toronto Six in the opening frame, but evened out as the night went on. Overall, the game was truly an effort worthy of such a marquee event as the teams battled, with the Six coming out on top 2-1 in the end.

Toronto looked good from the get-go, dominating puck possession and zone time. The Six took an early lead just 3:34 into the game. Kassidy Sauvé made the initial save, but got tangled up with some of her teammates in the crease. Breanne Wilson-Bennett was on the doorstep, but it was Brittany Howard who found the loose puck and flipped it up and into the net.

Sauvé was put to the test early and often, including by Lexi Templeman, who had a phenomenal spin-around chance. The Six did a good job connecting on passes while also playing strong defensively. They almost immediately shut down and momentum the Beauts got, and would outshoot them 11-5 in the first period.

The Six thought they scored with under four minutes to play in the opening frame. An errant whistle, mistakenly an icing call, halted the play, but the Six – at the other end of the ice – flipped the puck into a near-empty net.

Claudia Kepler tied the game for Buffalo just 30 seconds into the middle frame. Jess Healey sent a long cross-ice pass up to Kepler, who was coming up the right side of the ice. With an odd player rush and two Six players trailing her, Kepler beat Jackson low.

The pace of the game picked up as it went on, and the second period had more chances at both ends. Jenna Suokko and Anjelica Diffendal both had great chances for the Beauts, while the Six had a 2-on-1 chance early in the period that rang off the post.

As the third period went on, both teams fought to get that go-ahead goal. Each team had power play opportunities, and both Sauvé and Jackson made key saves, though Sauvé was certainly tested more.

Just past the midway point of the period, with roughly 9:24 to play, Sauvé went down into a split to make a save. She was slow to get up and did speak to the trainer, but stayed in the game.

The Six later took the lead with 7:50 to play in regulation. A shot from Kati Tabin ricocheted in front of the net, and Lexi Templeman was able to tap in the bouncing puck between Sauvé’s legs as she went down.

Although Buffalo would have a critical power play opportunity later in the game, the Six held strong to their lead. The Beauts then struggled to maintain possession long enough late in the game in order to pull the goaltender for the extra attacker.

Unable to find the equalizer, the Beauts dropped the game 2-1. Howard led all skaters six shots on goal, while Emma Nuutinen had four shots on goal. Sauvé stopped 28 of 30 shots faced, while Carly Jackson came up with a big 24-save victory.

That said: while outdoor games are always fun and always something special, I do wonder if perhaps it's time to give another team a chance. Buffalo has hosted this outdoor classic three times now – twice against the Six, and once against the Riveters. I'd love to see Montreal host an outdoor game, perhaps, or Connecticut.

The PHF's salary cap will double to $1.5 million per team for the 2023-24 season, the league announced recently. This represents another significant increase in the team's investment in its players, as the 2021 salary cap was just $150,000.

At this point, it is unknown what the floor or individual minimum salary will be for the upcoming season. If the PHF stuck to its current 75% rule, the floor would be $1.125 million.

It is also unclear what this means for players who already signed two-year contracts prior to this season. To keep things fair, I would expect those players to be allowed to renegotiate terms based on the increased cap.