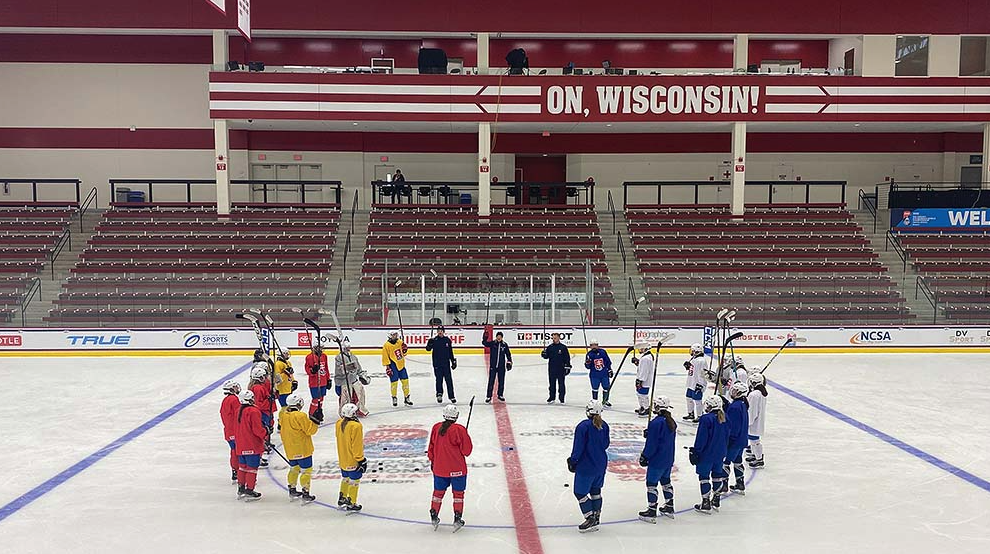 The "glorified doorbell cam" footage that former VP writer Kirsten captured and shared in 2019 is an infamous part of women's hockey lore at this point.

The high angle fish lens feed was impossible to watch and, when asked about it, the IIHF blamed the local organizing committee (LOC).

But what you might not remember about the doorbell cam is that it was from the 2020 IIHF U18 Women's World Championships held in Bratislava, Slovakia – thus they were placing the blame for the poor streaming situation on the Slovak Ice Hockey Federation. The darlings of this year's 2022 U18 tournament are ultimately supported by the federation that couldn't provide more than a doorbell cam for the top division IIHF U18 Women's Wolrd Championship in 2019.

The Slovakian team was relegated at that tournament, which certainly didn't help change any of the sexist minds back home. Defender Lily Stern said there was a reaction on social media among Slovakian hockey fans – the same "who cares" comments we're used to seeing here in North America.

Unfortunately, Lily and her teammates, who range in age from 14-18, are well used to this kind of response and try not to let it affect them.

"We made history. We quite literally made history," said Stern. "I think [people back home] should be really proud of us for this. Even if they aren't, they should be."

That's the backdrop against which Slovakia's historic win over Germany and advancing to their first ever top division knockout stage takes place. This team has radiated joy and delight at their opportunity to play in the top division. They were only invited back to this tournament after the IIHF issued a ban for Russia and Belarus. Getting to play in Madison has been a gift – an opportunity to not just get to play more top tier hockey, but to prove that this team deserves recognition, respect and support. And they were determined not to squander it or take it for granted.

"[Advancing out of the group] was our plan and our goal before the tournament," said coach Gabriela Sabolova.

Heading into the final game in the preliminary round, the Slovaks knew they'd only advance to their first-ever quarterfinals if they won the game by four or more goals. They slowly built the score throughout the game, and just four minutes into the final frame, they took a 5-1 lead thanks to a goal by Hana Fancovicova. But there was a lot of time left on the clock and the Germans were determined to try and ruin their chances. With fewer than eight minutes to play, Yvette Reichelt scored to make it 5-2 and take away the Slovak's needed margin of victory.

But with under four to play in the game, Barbora Kapičáková found the back of the net to extend the Slovak lead to 6-2 and when the final whistle blew, she and her team – and the supporters they brought with them – celebrated like it was a medal round game.

For them, Sabolova said, that game was their championship.

Though they went on to be handed a 7-0 loss by Canada in their quarterfinal game on Friday, the Slovaks will play Czechia on Sunday to determine which of them places fifth and sixth in the final rankings. They will stay in the top division for next year's tournament.

Playing in that quarterfinal was an experience Sabolova and her players had only ever dreamed of. "We knew this was one of the favorites in the tournament. I think this was our first game against Canada's U18 team in history," she said. "It was really like winning a lottery, like a present for us to have such a possibility to play these good players and for our team. It was like a chance for us to learn."

Despite the score, the game provided a stage for goalie Livia Debnarova to shine. She made 58 saves, a number of them acrobatic and skilled. Sabolova hopes that performances like that show the college coaches in the rink and watching the streams that Slovakian players could be a boon for their programs. "It was hard, but I think it was fun, because a game like this is not every day," said Debnarova."We proved a lot here and we fought really hard."

This is a tournament, but it's also a chance for players that might not otherwise be scouted to earn opportunities to play for universities in the US and Canada – not just Slovakians, but skaters from all the non-North American countries playing in Madison this week.

An increasing number of European players have been coming to play in the NCAA or U-Sports. It's not only an opportunity for an education, but for the players to receive the type of consistent training, coaching, and competition that they aren't able to find closer to home. Those players bring their talents back to their respective national teams and it makes a huge impact.

"Maybe some of our girls can come here to play hockey here or maybe in Canada or somewhere abroad and then when they come back, they have much more experiences than if they had stayed home," Sabolova said.

During qualification for the 2022 Beijing Olympics, just one player on the Slovak roster had US college experience. Simone Martina Bednárik played Division III at SUNY-Oswego. By contrast, five players each from the Czechia and Germany teams had played in the NCAA, along with four each from Norway and Austria.

The win over Germany kept the Slovaks in the top tier tournament in the U18 age group, and that can make all the difference when it comes to support, attention, scouting, and so much more.

"It's really important. We hope this helps our women's hockey to grow. I think it will help step by step to improve our hockey," said Sabolova. "The vision is an Olympic Games. Maybe in the future with these girls, they will have more experiences in more tournaments like this and I hope we will play in an Olympics."

Slovakia did not get a chance to play games against any top division teams before they arrived in Madison. This was in part due to COVID, but also because Slovakia ultimately did not expect to even be in this tournament. Sabolova hopes that's something that will change before the next U18 Women's World Championship. The Slovaks came in and accomplished their goals with little opportunity to prepare. Imagine what they could have done with more time together on the ice.

"You saw they grew every game here. I hope we will have a chance to play with teams from the top division during the season. Every game will be like school for as we will learn. I'm hoping to educate," Sabolova said.

Staying in the top group is about so much more than proving they deserved their second chance, or proving people at home wrong or even getting individual opportunities thanks to performance. It's also about the legacy of girls' and women's hockey in Slovakia and what that can mean for the future of this team and the senior national team.

"I'm really happy to be staying up in this division so the younger generations can also try it out and see how they do," said Stern. "Proving that we can actually fight and win is actually really good."