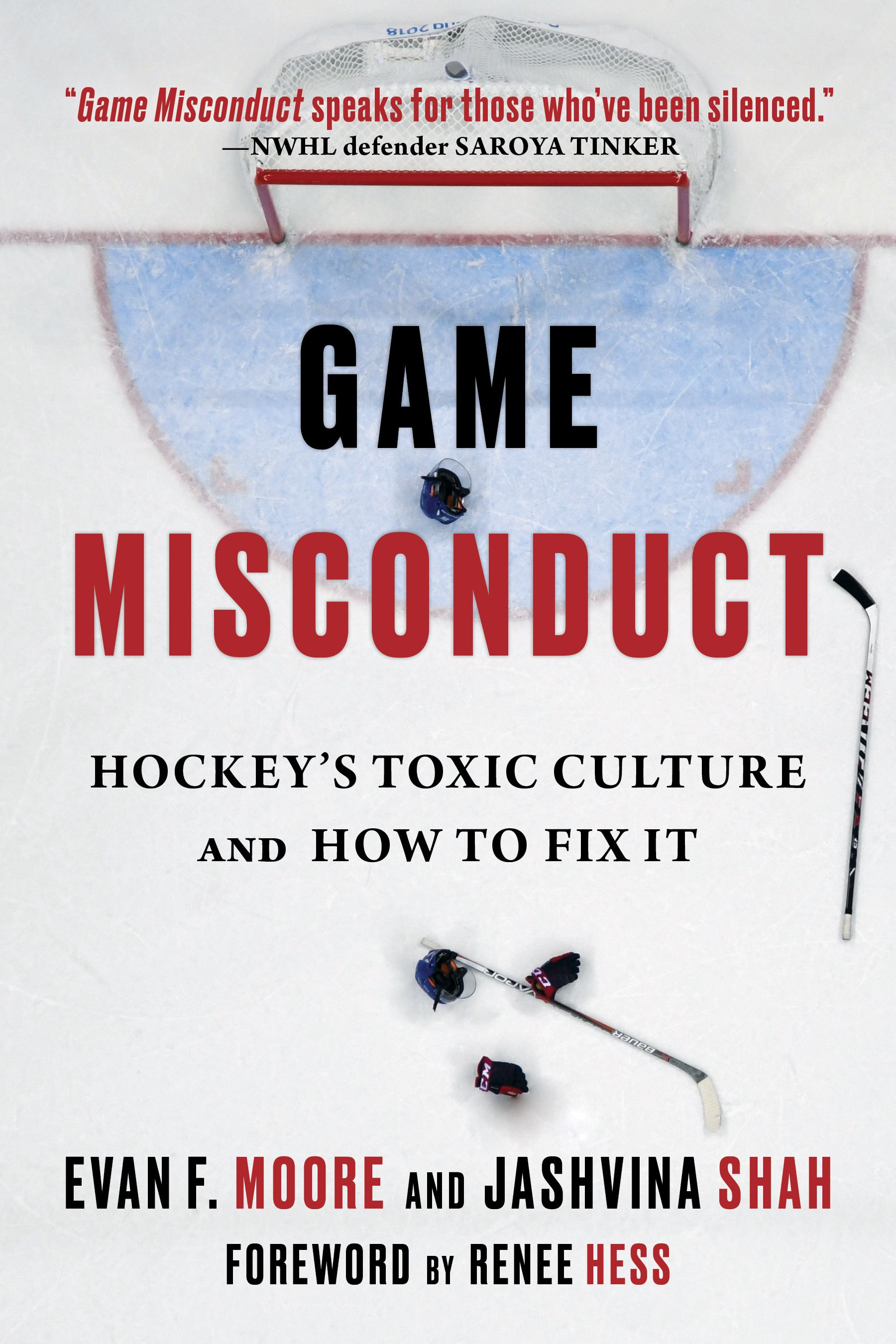 Anyone who knows Evan Moore or Jashvina Shah – or who follows them on Twitter – is well aware that they aren't afraid to call hockey out on its problems. Now, Moore and Shah (a former Victory Press writer) have pieced their thoughts together in the recently-released Game Misconduct: Hockey's Toxic Culture and How to Fix It, published by Triumph Books on October 12, 2021.

In Game Misconduct, the authors attempt to break down "hockey culture" into segments, exposing some of its key facets, and highlighting just some of the issues that surround the sport. Readers will definitely benefit from having a familiarity of what "hockey culture" is, but for those who are less familiar, it refers to the often-toxic culture around the sport at multiple levels. This culture often encourages players to continue playing through injuries that would sideline anyone else; fosters racism and homophobia in locker rooms, on the ice, and in arenas; pushes players into drugs and alcohol abuse; and supports cover-ups of misconduct including sexual assault. Hockey is considered particularly insular among popular North American sports due to, among other things, its whiteness, and high financial barriers to entry due to equipment and facilities costs. Hockey is often a white sport played by wealthy white people. This insularity is what allows the culture to be perpetuated.

I received an advance copy of the book, and I have to say: it's a must-read for anyone involved in or around the sport of hockey. Unfortunately, due to the subject matter, those who need this book the most are also those who are least likely to pick it up. Those who believe hockey culture isn't toxic; those who willfully ignore (or worse, encourage) the racism, sexism, homophobia, and transphobia that surround the support – these are the people who could benefit most from this honest look into hockey's problems, but they're highly unlikely to even consider reading it.

If you've been around the parts of "Hockey Twitter" that want to be part of positive change in the sport, or if you read the Victory Press (hi!), you'll recognize plenty of people quoted in this text: Black Girl Hockey Club founder Renee Hess; journalist Hemal Jhaveri, then of USA Today and more lately of Wired; Brock McGillis, one of the first publicly out gay men's hockey players; author and podcaster Shireen Ahmed; Seattle Kraken intersectionality consultant Chanel Keenan; current AHL player Kurtis Gabriel; and now-retired college and NHL goaltender Ryan Miller.

All levels of hockey are affected by the toxicity of the sport's culture, which harbors and encourages racism, sexism, violence, abuse, ableism, and other types of discrimination and bigotry. It's not just the NHL. It's not just professional men's hockey. It's not just USA Hockey, or Hockey Canada, or juniors, or college.

It's everywhere, and the insular nature of hockey just helps further the toxicity for years down the line. So many of us have recognized the revolving door that is coaching, scouting, and management, especially in the NHL. A position opens up and is quickly filled by someone who has been around. There is little room for new voices, or disruptive voices, and it’s not by mistake:

"Hockey exists in its own bubble, literally and figuratively. It's composed mostly of boys and men who are white, cishet, straight, and upper-class. And those who play often become coaches and teach the same values to the next generation."

Shah and Moore break it down into a handful of categories, and try to discuss each one in as much depth as possible. In reality, there is so much more that could be said; each category could probably fill its own book. From a basic overture of hockey culture, to discussions of bullying and hazing, sexual abuse, homophobia and more – it's a little bit of everything.

This quote from the book hit me particularly hard, given my coverage of women’s hockey:

"We need to find the balance between supporting women's hockey and eradicating the bigotry inside it."

Although they're talking about women's hockey in this specific part of the book, the thought can be extrapolated. We need to find the balance between loving hockey eradicating the bigotry inside it.

Game Misconduct is overall well-written and brazenly honest, and I cannot begin to fathom the amount of time and energy that the authors put into this book. While I understand the need to provide a general overview of hockey culture's many problems, it's challenging in its breadth and scope because the authors can't really do a very deep dive into any single facet. As soon as the book started really getting into the meat of one issue, it moved onto the next.

And sometimes, that material is overwhelming and chaotic. Choosing to tackle a topic of this size in a single book presents many opportunities where the authors may have had to make choices to cut material or context, or link topics together. Chapters could have benefited from being further separated with section headers to better distinguish where one point ended and another began. The first chapter, for instance, is 25 pages long and goes from talking about conformity and respect to how parents intermingle with the culture, to gay hockey culture, to respectability politics, to Tuukka Rask wearing a Boston Police cap, to the NHL player-led protests, to Rask leaving his team during the pandemic, and more. All of these things are of course related, but to someone who isn't intimately familiar with the recent history of hockey culture already, these ideas may take time to sink in.

There is so much in the book, and still so much more to be said. Any one incident or topic in this book could have an entire other book written about it. Game Misconduct is just an introduction to discussing these matters openly, and it is an important one. This book provides a wide-ranging blueprint of hockey culture as it is and where the key issues are, with directness and clarity that is rarely seen in writing about the sport. The works that should follow from around hockey and other sports need to continue the difficult dissection that Shah and Moore have begun.

I've been a hockey fan since the age of five. I love this sport and so many things about it: the chill of the air in the rink, the sound of skates cutting through the ice; how fast a player can make their way from end to the other. I love the energy, the thrill, the excitement, the camaraderie.

But I don't love the sexism and misogyny, or the racism, transphobia, homophobia, abuse, and violence. The list of problems goes on and on. Every day, there is something new. Even over the last few months, there's a laundry list: the NHL's Chicago Blackhawks and the alleged sexual abuse that went on in the organization; the Pittsburgh Penguins' alleged involvement with a sexual harasser; Anna Kane accusing her estranged husband, Evander Kane, of abuse; the PHF's past involvement with Barstool Sports.

It never ends. It's exhausting. I love this sport, and I want it to be better. That's why I do the work that I do, and it's clear that's why Shah and Moore wrote Game Misconduct. With that said, they cover a lot of ground, and these are serious topics. It took me several weeks to get through the book; I gave myself the time and space to process it, and I suggest anyone else reading it do the same.

This isn't light reading; it's heavy stuff, happening to real people, and this isn't the kind of book you can read in one sitting and toss to the side. It's going to make you uncomfortable – especially if you are white, cishet, straight, upper-class – but that's a further indicator of why it's so needed. Read this book and reflect. Examine your privilege, recognize your responsibility and decide how you're going to put in the work to help effect real change. Then do it.

Game Misconduct: Hockey's Toxic Culture and How to Fix It is available for purchase through Triumph Books.