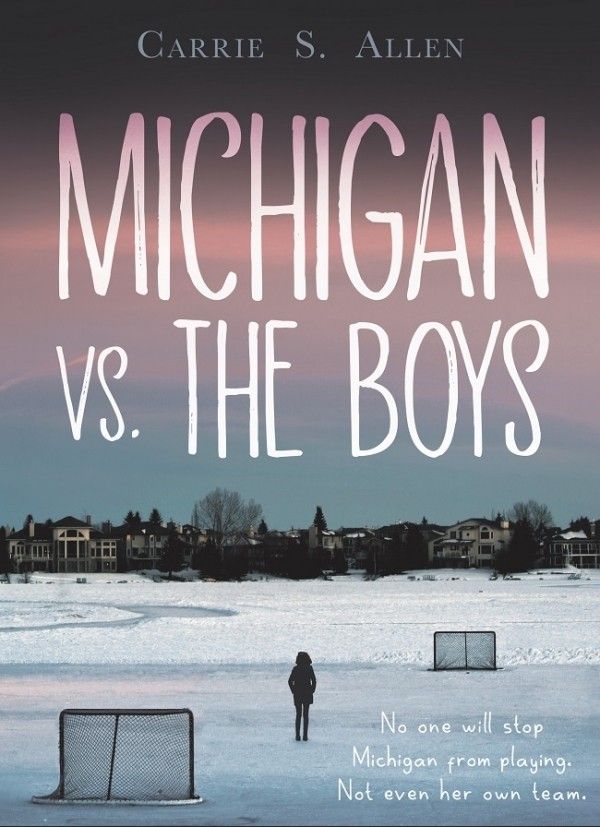 Michigan vs. the Boys, Carrie S. Allen's debut YA novel from KCP Loft, comes at a really pivotal time in history not just for women's hockey, but for women in general.  So, the book assumes a pretty difficult task as it tries to mesh recent hockey events with the unique pain and weirdness of being a teenager and the extremely harsh realities of gender-based violence, harassment, and abuse.

But our narrator, 16-year-old Michigan Manning, is perfectly suited to tell us this story – she's funny, blunt, stubborn, and smart as hell. In other words, she's a women's hockey player. If you've met one, you know someone like Michigan. Her attitude is also perfectly relatable to any girl who has grown up with friends and family who support her in being whomever she chooses to be, but within a wider society that has yet to catch up. She's simultaneously self-conscious and self-possessed. Michigan is an athlete, teammate, friend, sister, and daughter who knows pretty well who she is and who she wants to be, but events (and some truly mediocre and evil individuals) conspire around her to ensure that she doesn't get to be that person without a fight. Unfortunately, unless you've been a straight white cis dude your entire life, this story is all too familiar.

The story opens with the girls' hockey program being cut at Michigan's school, for budget reasons. They also cut another underperforming program, the boys' swim team, in order to remain compliant with Title IX. Allen drops us right into the action and uses this upheaval in Michigan's life to introduce us to her teammates, plus a love interest – Jack, the only good swimmer on the now-defunct boys' team.  Her friend group is full of memorable characters with distinct personalities, and each of them handles the news about their team being cut in a different way that splinters them off into new directions.

Michigan struggles with this herself, and is paralyzed by indecision while everyone else seems to land on their feet pretty quickly, including her best friend Brie, whose rich parents quickly buy her a spot at a private school with a hockey team.  Michigan, the kid of a cop and a clerical worker, doesn't have the option of private school or a hockey academy.  She decides to help coach her brother Trent's bantam team. At the tryouts, she meets Megan, an eighth grader who tries out for (and makes) the boys' bantam team, and she strikes up a budding friendship with Jack. With Jack and Megan as her emotional talismans, Michigan makes the decision to quietly try out for the high school boys' varsity team. She will be the only girl to do so, and she gives it her all in the tryouts, easily showing that she is a standout talent – faster and more skilled and better-conditioned than any of the boys. She makes the team. The coach treats her like shit for it, but she makes the team.

The boys, however, are not happy about this. Certain players, including the team captain, Daniel, don't like having their spotlight stolen by a girl. Other boys who were left off the team are angry, feeling that Michigan stole their spot. I will be direct about it: the guys on Michigan's team and their friends put her through absolute hell, and the descriptions of the abuse she endures and her subsequent anxiety and PTSD symptoms are left completely unvarnished.  As the abuse escalates, I found myself reading with my mouth open in disbelief.  I kept asking myself, why would they treat the best player on their team this way?  Michigan is good – she's the reason they're winning games. Wouldn't you want the best player on your team?  (And I'm not alone – Michigan's friends wonder this too when they realize that the boys have been hurting her.)

But then I remembered the online abuse and trolling that I get, that my friends and colleagues get, anytime one of us dares suggest that Hilary Knight or Marie-Philip Poulin is better than the majority of NHL players. And then I remembered that so many boys are raised to be violent misogynists. I remembered how anytime I've been subject to harassment or abuse, I have worked overtime mentally and conversationally to minimize it and make it seem minor, inconsequential, not a big deal. As Daniel's specific motives are revealed, the whole situation becomes frighteningly realistic. He isn't just abusing Michigan because she is a girl – he's abusing her because he believes that a girl existing and playing at the same level that he does is literally taking something from him that he deserves.

"I never imagined I'd be playing so well that I could call the shots," Michigan says to us about midway through the book. "I was always a good hockey player, for a girl. But I'm starting to think... maybe I'm just a good hockey player." It's this – the fact that she is good, and she knows it – that makes her so threatening to the young men she's supposed to be playing with.

As she endures absolutely brutal treatment at the hands of Daniel and his teammates, Michigan walks the tightrope that so many of us have walked: she's trying to be the best that she possibly can be while also making herself as small as possible. It's fucking heartbreaking. She hides bruises, she looks over her shoulder. She fears being alone at school and at the rink. She withdraws from her friends and her new boyfriend. All the while, she's elevating her gameplay, and gaining traction with her new coach, who moves her back to her natural position at center after sticking her at wing for the first part of the season. Michigan is the team's leading scorer, and no one is aware of the price she's paying except her and her abusers. The better the team gets, the worse Michigan is suffering, because to most of her teammates, it's not worth the success if a girl on the team is the reason they have it.

The story here is good, even when it hurts to read, though at times I wondered how closely the narrative was interrogating some of its themes. Without spoiling too much of how Michigan's story plays out: once the truth is revealed, Michigan finds that there are people in positions of power who believe her. I had concerns about the messaging that the police could be trusted to investigate matters such as this reliably and without victim-blaming. More believable to me was the army of Michigan's former teammates who defend her once they realize that she is in danger. In the real world, it usually takes a large group of women and other marginalized people screaming about an issue, perhaps for centuries, before a white dude acknowledges that there may be a problem.

But a book like this, that put its heroine through so much suffering, needed a happy ending, where the system worked (ish) and we know that the sport of hockey is saved for Michigan and for girls in general. It was satisfying, even though parts of it rang slightly untrue for me as someone who is deeply skeptical of authority figures. I wondered, too, about the hell that Michigan goes through and the willingness she has to let her body be punished physically, whether by training or by violence, and the line between the two. It seems blurred for Michigan at times, for sure.

This is a book with levels of nuance, though, that give it the ability to pull all of this off. It does directly interrogate complicated matters of abuse and harassment, often elegantly and in one sentence – for example, Michigan wonders to herself at one point why she should be appreciative of a teammate who is mostly decent to her, but didn't directly or clearly warn her at a time when he knew she was in immediate danger. It really illustrated, like a bolt of lightning showing the contours of clouds in the night sky, how low the bar often is for men we respect and like. Well, he didn't hit me. He didn't rape me. He doesn't give me overtly creepy vibes. He didn't do it – he just watched.

The greatest delight of this book, aside from Michigan's goofy and blunt narrative voice, is the level of detail that Allen allows herself when describing actual hockey gameplay. As someone who has agonized for hours over how to describe minor but significant plays to make them sound exciting to readers, I know how hard it can be to make those split-second interactions and puck movements sound coherent and meaningful. More than anything, I enjoyed being at the rink with Michigan while she had the puck on her stick. After sitting and finishing this book in one sitting, I wished I'd had more time with her, shooting and playmaking and training with teammates who actually liked and respected her. I don't know if Allen would consider a sequel, but after all that Michigan's been through, she deserves some more big moments on the ice.

Aside from the evergreen "men in positions of power are likely to be trash" message, I think the main takeaway from Michigan vs. the Boys is to try to tell someone you trust when you are being abused or hurt. It is not your fault if you can't just yet, but if you have a supportive person nearby, please, please try. Michigan is surrounded by friends, family, and a boyfriend who is an actual angel, but she still has an extremely hard time telling anyone what she is dealing with. Once the people who love her realize she is in trouble at various points, they rally around her to help, and none of us, no matter what we've done, deserve any less if we are being abused.

It's that indelible image that sticks with me, of Michigan's friends literally busting down doors to help her. She's strong and powerful on her own, but it took a village – of pissed off, imperfect young women, and some guys clumsily getting the handle on how to be an ally – to support Michigan and to make sure that there would be a place for girls to play hockey. It's an emotional, difficult ride to get there, but Michigan delivers us safely.