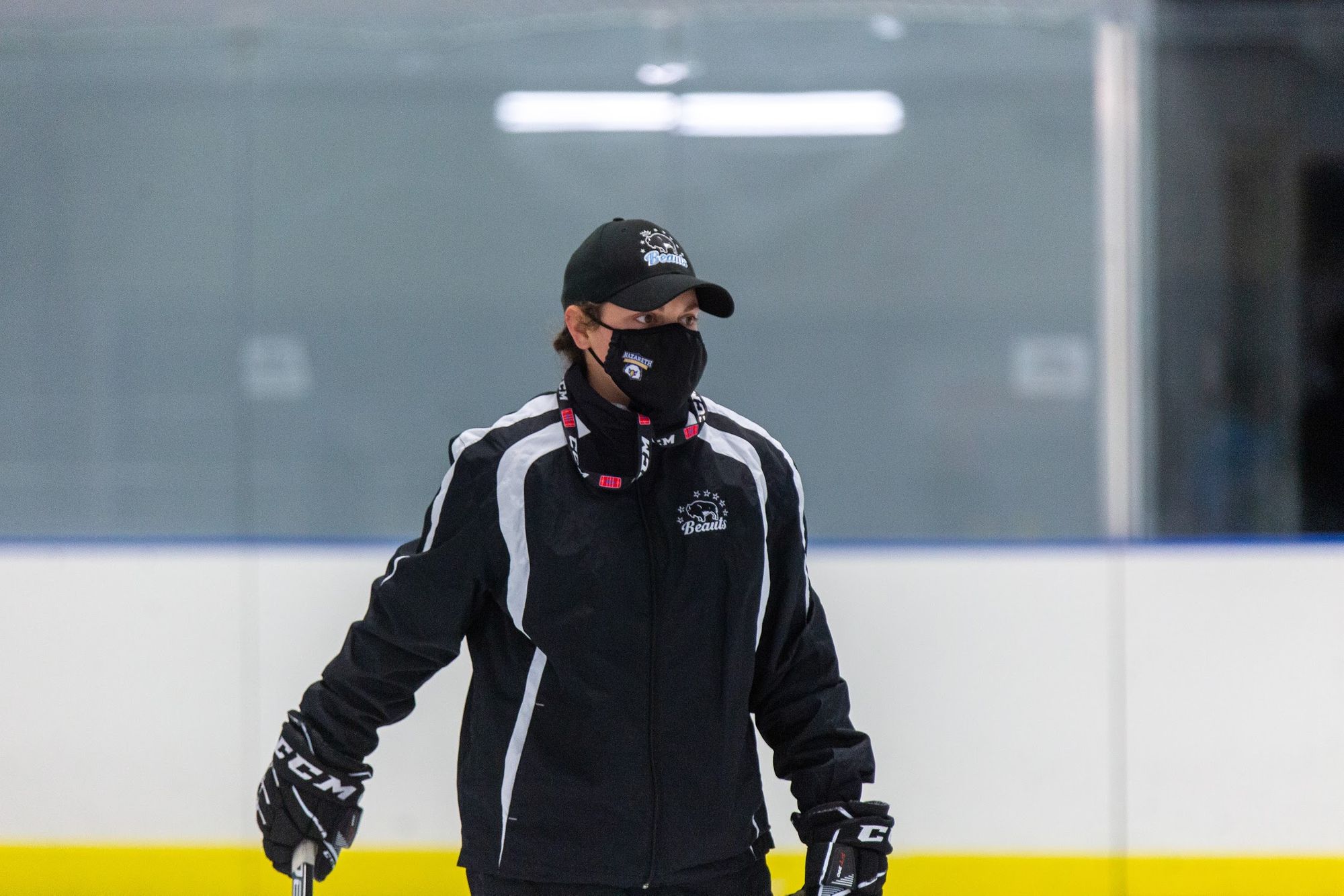 In many senses, sports are a microcosm for society at large. In sports, whether at the hockey rink, on the lacrosse field or in the locker room, mental health is often overlooked or overshadowed by physical health, or seen as secondary to it. In society, although there have certainly been progresses made over the years, mental health still comes with a stigma. Topics like depression, anxiety, bipolar disorder, and trauma – and strategies like counseling and medication – are still often shunned in everyday conversation.

Rhea Coad is one person working in the sports world who is trying to change that. She is sharing her own struggles in the hopes of sparking conversation and helping to erase the stigma that surrounds mental health. During the 2019-20 NWHL season, the Buffalo Beauts assistant coach (now associate head coach) began "Buffalo Believes," a community initiative to connect with local teens dealing with issues such as the loss of a parent, grief, and depression – topics that Coad can relate to firsthand.

"She wasn't feeling well, and doctors didn't know what it is... and then we found that it was brain tumors," Coad said. "We thought that all that really had to happen was a pretty intense brain surgery. As long as that went smooth, with a long recovery, she'd be okay."

"She had the surgery, and it was definitely a tough one," Coad added. "It was a tough one to see my mom come out of, to see the scar on her head and everything. They did get all the tumors out, but they were cancerous. The cancer in her brain really quickly spread through her breasts, lungs and bones."

Doctors deemed her terminal and gave her a few months to live; she chose to enter hospice care at home.

"We'd have a nurse come once in a while and check in," Coad said. "It was nice for her to be able to be at home and all of that, but it was definitely tough on my family. My dad worked a ton, and I was going to school and playing sports... It was definitely a challenging time for my family to try and balance life."

As Coad says, things went downhill quickly from there. Her mother was diagnosed in September and passed away just a few months later in December.

"From there, it was just my struggle with running away from the problem of my mom passing away and not truly dealing with it, to finally be able to admit to the problems that I've had and learn from them," she said.

Hockey provided an escape, but also an avenue to avoid her grief altogether. Coad moved to Canada to play hockey for the Ontario Hockey Academy Prep team in the 2012-13 season. "Right after my mom passed away, I went to the Ontario Hockey Academy for my senior year. It kind of gave me an excuse to run away and truly find who I was. [I was] 16 and even though I still have another parent, it's really different," she said.

Coad emphasizes that sports gave her a support system and an important outlet. "Sports in general are definitely my saving grace," she said. "I've met a lot of great friends and teammates who have helped and supported me, and my coaches. They're the reason why I'm at where I am... It definitely got my mind off of it, and it did help me run away a little," she added.

While she tried her best to avoid it, Coad's grief eventually caught up with her. While she was struggling, she was hesitant to seek counseling. "I was definitely against it at first," she said. "In my head, I was like Oh, we're going to talk about these things I don't want to talk about, so why would I go? Then a really good friend of mine came in contact with a counselor that she had really liked, so she had a counselor reach out to me."

"The counselor left me a voicemail and a phone number to call back," Coad added. "When I called back, it was this woman and her aura just really let my guard down. She gave me a ton of helpful strategies and changed my outlook on myself and loving myself."

"If I didn't meet her... I was going down a pretty scary path for a little bit there. I didn't want to get out of bed; I didn't really know what my purpose was anymore. Even though I had a great life, I had a job, I was in college, I had great friends. At the time, I had a great significant other," she said. "I didn't know why I was feeling bad because I had such a great life, minus the tragedy of losing my mom."

With the help of her counselor, Coad was able to develop strategies to help her cope and get her life back on track. To this day, she continues to use those same strategies along with counseling.

Now an assistant coach with Nazareth College in addition to her position with the Beauts, the 25-year-old is using her platform to open a conversation about mental health.

Her "Buffalo Believes" initiative is one way she is working to change the conversation. Last season, Coad connected with two local individuals who have dealt with situations similar to her own. They were able to attend a Beauts game, meet Coad and the players. Coad says she developed a deeper connection with them that continues to this day.

Due to the ongoing hockey offseason and the COVID-19 pandemic, Coad has shifted to a virtual platform for the time being. She recently hosted a Zoom conference to get the word out about the initiative and her story and hopes to find ways to keep it going in the coming months.

"When I became a coach... not that all my players have lost a parent, but they've definitely gone through personal issues of their own, seeing all these college students who struggle with so much and kind of just the world in general [struggling] with depression," she said. "I thought it was a great time and I really felt passionate about sharing my story. If it touched one person who would have to go through what I went through, that's kind of the reason why I did it."

"Before, I was embarrassed or ashamed of it; now I'm not. I'm proud of the things I came through and overcame, and I'm at the point now where I'm ready to share my story so that it helps even one person," she added.

Coad thinks that even as taking care of mental health becomes more normalized, there is still a stigma, and it's an important conversation to have.

"We all have a ton of friends and social media where everyone looks like they're living the best life ever. But if you were to dive into the real life, there's a lot of hidden things that we don't talk about," she said. "I think those hidden things is just what the problem is in society: we don't talk about it. We try to push it down and either hope that it gets better or we can take care of it ourselves."

"I don't have the qualifications to help anyone, but I can guide them into why they should talk to someone," she added. "My challenge was I didn't want to talk to someone. Once I started, it was totally different than what I thought. I think the biggest thing is just trying to get out there that it's okay to not be okay, and it's okay to have to go to talk to a counselor. So many people do now. It's not that it's the 'norm' but it's becoming it."

"I think the biggest thing that clicked me when was when I was listening to a mental health speaker talking to a group of athletes. He was saying that if your ankle is hurt, you do physical therapy, rehab and all that," Coad said. "Well, how is it any different if your brain is a little bit injured, you have to rehab it? You have to do what you can to get it back to functioning normal. I think that was the biggest thing that really clicked with me. We work on the rest of our body; what about the brain? We don't work on that as much as we truly should."

If you are experiencing symptoms of depression or another mental health issue, often the first step is realizing that you should speak to someone, whether speaking with a friend or family member or seeking professional help through counseling or therapy.

However, just realizing you ought to speak to someone is often only the first barrier to face when seeking mental health assistance. Access to these services can be difficult depending on finances, insurance and location; the issue of access has been even more exacerbated during the pandemic, when many people are suffering financially and medical services are overwhelmed.

Some mental health services may offer a low-cost or sliding fee scale, which allows you to pay based on your income. Students may be able to seek out these services through their schooling or campus resources. Many employers offer connections to assistance programs. Federally-funded health centers in the United States may provide low- or no-cost options; you can also use Mental Health America's online search to find programs and providers near you. There are also options from Internet-based services (such as Talkspace and BetterHelp), but these can also come with a hefty monthly subscription price tag. However, many providers also offer their own tele-health options using secure platforms, and these options have been expanded during the pandemic.

If you are experiencing a mental health crisis, consider calling the National Helpline from the Substance Abuse & Mental Health Services Administration at 1-800-622-4357. This is a free, confidential 24/7, 365-day-a-year treatment referral and information service for individuals & families facing mental and/or substance use disorders.

You can also contact the National Alliance on Mental Illness HelpLine at 1-800-950-6264. The Grief Resource Network has compiled a list of national crisis lines for topics including abuse, addiction, suicide prevention, and more.

For more information about the Buffalo Believes initiative, contact Rhea Coad at rcoad4@naz.edu.