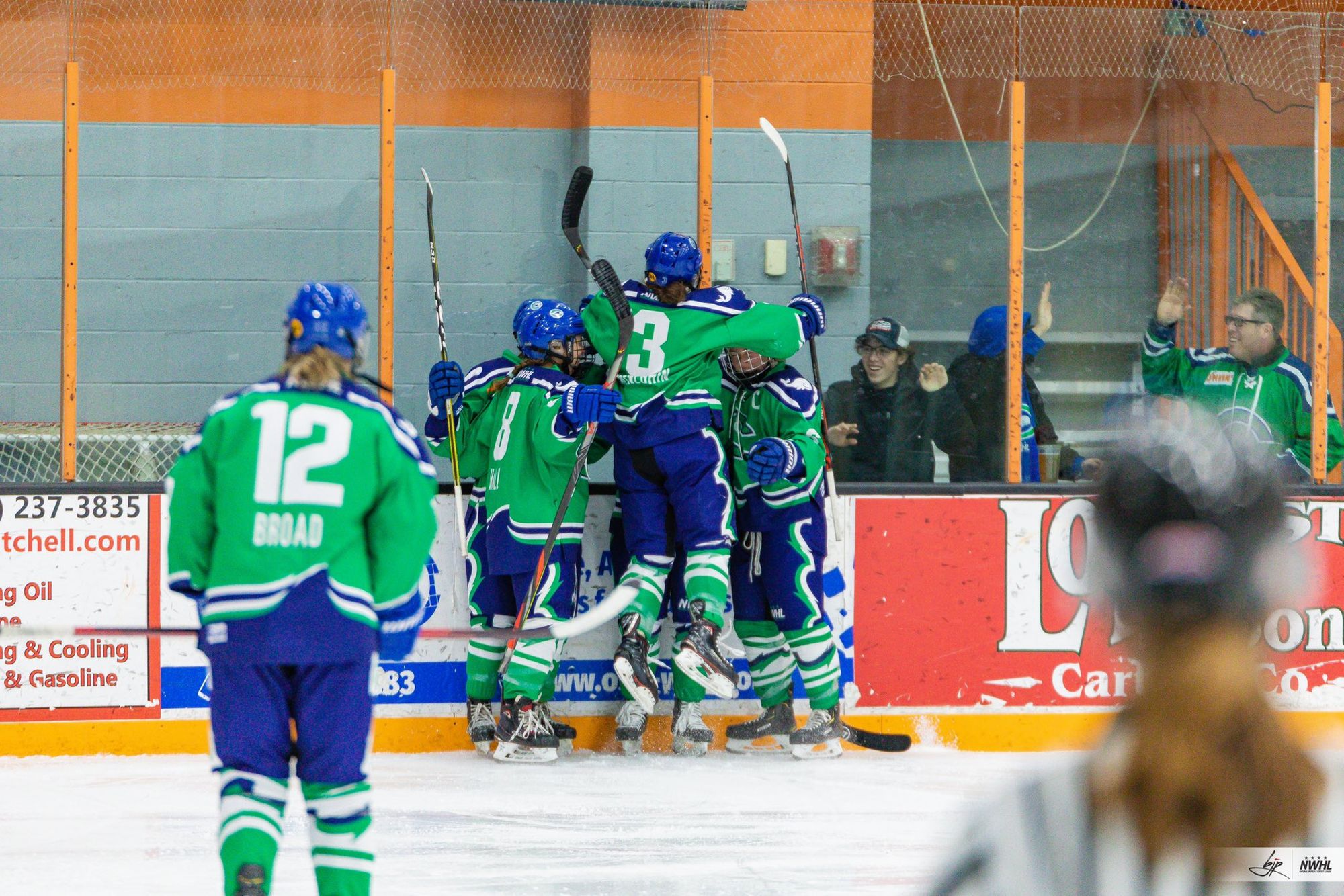 I'm not going to sugarcoat it: this season was an awful one for the NWHL's Connecticut Whale. With a mix of returning and new players, they struggled throughout most of the season and won just two games. Miraculously, and thanks in large part to the league's generous postseason format, the Whale made it to a semifinal game, but that's where their season ended.

With a 2-20-2 record and just six points on the season, this was one of the worst seasons in Connecticut's franchise history. (They also recorded six points last season in a 16-game schedule, and won only two games then, as well.) Their 39 goals-for weren't the fewest in franchise history, but were significantly fewer than any other team in the league this season.

Despite all of that, the Whale won a postseason "series" for the first time in team history. Their only previous postseason victory was a semifinal game win in 2016, but they ultimately dropped that series in three games to Buffalo. This year, the "series" was only a one game play-in, but still a notable feat for Connecticut to climb from the bottom of the standings and earn a spot in the semifinals.

The Whale this season had a mix of returning players, including Shannon Doyle, Kayla Meneghin and Elena Orlando, and newcomers, including Sonjia Shelly, Brooke Wolejko and Emma Vlasic. Vlasic was significant in the faceoff circle, while returning forward Kaycie Anderson and defender Doyle led the team in points (11 each).

Doyle was not only critical offensively; she also contributed defensively, with 64 blocked shots and 17 takeaways. Other notable players this season included Vlasic (nine points, all goals) and Sarah Schwenzfeier, who also stepped up for nine points. Meneghin, despite appearing in only 14 games, also accrued eight points.

Wolejko and Shelly split goaltending duties pretty evenly over the course of the season. Wolejko was credited with both regular-season wins, going 2-8-0-1 with a .914 save percentage and 3.62 GAA in about 713 minutes of ice time. Shelly went winless in 13 games, putting up a .894 save percentage and 3.99 GAA in just shy of 691 minutes. Cassandra Goyette played just forty minutes during the season.

The Whale were led by new head coach Colton Orr this season, with Laura Brennan serving as one of the team's assistant coaches after previously playing for the team. Mike Bonelli also joined the Whale as an assistant coach.

This season did not start off well for Connecticut, who started the season 0-3 with losses to the Buffalo Beauts, both on home ice and on the road. As the season went on, the Whale continued to struggle, regardless of where they were playing; they didn't get their first win of the season until January 11, a narrow 4-3 win over the Metropolitan Riveters. After three more losses, they won another game – once again, over the Riveters. Connecticut finished the regular season on a five-game losing streak.

During the regular season, the Whale went 0-8 against the Minnesota Whitecaps; 0-5 against the Beauts, 0-6 against the Boston Pride, and 2-3 against the Riveters. Both of their wins came on the road.

Of course, none of that mattered when the postseason hit. The Whale, as the fifth seed, headed to Buffalo for a play-in game – and won, decisively. Hanna Beattie had two goals, while Katelynn Russ also had a pair, in just her first game with the team. Wolejko made 28 saves in the 5-3 victory, which sent the Whale to Boston to face the first-place Pride.

The Whale put up a good fight, but ultimately saw their season come to an end with a 5-1 loss to the Pride. The game wasn't nearly as lopsided as the score would lead one to think, and overall, it was a positive end to Connecticut's season.

↑ Improvements! Although in many ways it doesn't seem like it, there are positives to take from this Whale season. Their postseason victory, and how close they kept the game in Boston (until the third period) are high points that the team should be proud of. Some of their late additions, like Russ, were also notable and are promising if they stick around in the future.

↓ The Whale had the worst special teams in the NWHL this season. Their power play was successful only eight percent of the time, while they successfully killed off 76 percent of penalties. They also managed 1.6 goals on average per game.

↑ Despite a lot of turnover in net, the Whale's goaltending was impressive at times. They lost both Sam Walther (who went to the Riveters) and Meeri Räisänen over last offseason, but Wolejko and Shelly both made some critical saves and did their best to keep the team in games over the course of the season.

↓ As I've already mentioned, Connecticut won only two games this season, both on the road. Even their postseason win came on the road. So much for "home ice advantage."

Head coach Colton Orr and his staff of Brennan and Bonelli seemed to be a good fit for the Whale, even if the end results weren't ideal. Brennan stepped up big time when Orr couldn't make it to games early in the season due to his prior commitments with Battle of the Blades, but there's no guarantee that any of them will be back for next season.

The Whale also found a new home this season: the Danbury Ice Arena. They'd spent the previous two seasons at Terry Conners Ice Rink. As NWHL teams continue to cycle through different home arenas, we'll see if the Whale end up in the fifth arena in franchise history. It'd be nice to see them find a more permanent home. They also played a game at Webster Bank Arena, home of the AHL's Bridgeport Sound Tigers, as part of the first-ever NWHL/AHL doubleheader.

Things to consider in the offseason for the Whale: