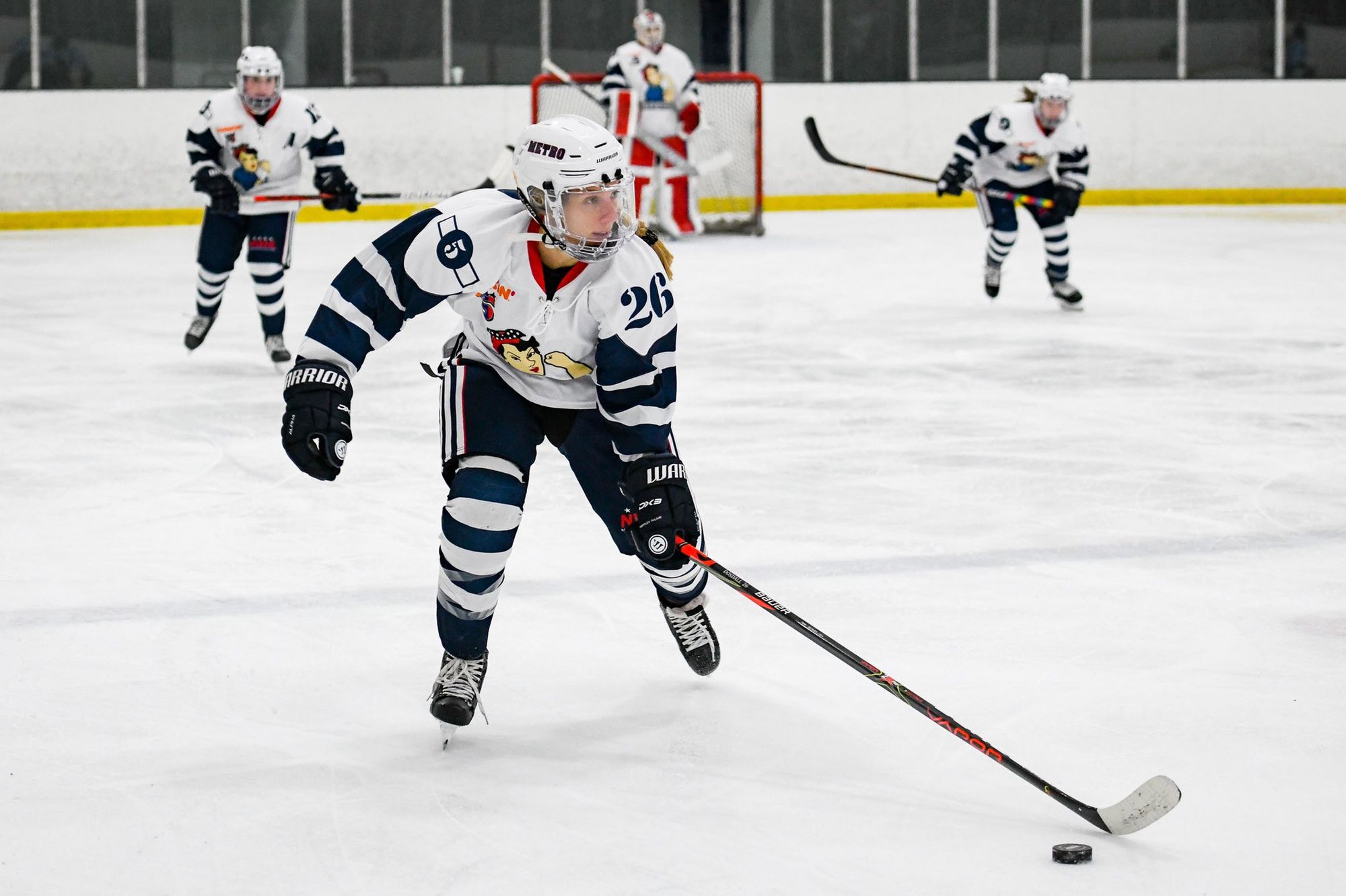 The past two seasons have been like night and day for the NWHL's Metropolitan Riveters. If there was an award for "Most Improved," the 2019-20 iteration of the team has certainly earned the honor. From a lowly 4-12-0 finish in the 2018-19 season, during which the team earned just eight points, to a 10-11-3 finish with 23 points this season, the improvements in the Riveters' organization were potent and visible.

Although they weren't able to make it back to the Isobel Cup Final, it's certainly promising for fans of the team that they were able to turn things around after an incredibly rough season, thanks in large part to a new head coach and several players stepping up with big seasons.

Like any of the NWHL's five teams, the Riveters faced a heavy roster turnover heading into the 2019-20 season. The majority of last year's team is gone, with players like Amanda Kessel, Miye D'Oench, Courtney Burke, and Jenny Ryan no longer on the team. Audra Richards, a big offensive threat, took her talents to Minnesota.

But one of the most critical components of the organization, original player Madison Packer, returned, and more than doubled her point total from the previous season. The captain produced 34 points in 24 games this season, including 13 goals, and averaged 1.4 points per game (compared to 0.9 PPG the prior season).

The introduction of several newcomers also played heavily into the Riveters' turnaround this season. Kate Leary was second on the team in scoring and led Metro with 16 goals, including three power-play tallies. Kendall Cornine put up 24 points and a team-high 115 shots on goal, including one game-winner. Other notable producers included Tatiana Shatalova, Cailey Hutchison, and defender Leila Kilduff.

Of course, the team on the ice isn't all that changed. Most notably, perhaps, was the coaching change for the Riveters. Randy Velischek did not return to the team, and general manager Kate Whitman Annis hired Ivo Mocek as his replacement. Velischeck was hardly a fan favorite, and although Mocek's future with the team has not been publicly solidified, he certainly appears to be a more suitable fit.

The Riveters were hot and cold throughout the 2019-20 season. They opened the season with two losses, including a cringe-worthy 9-2 deficit against the Minnesota Whitecaps. They quickly rebounded after that loss, however, with a 4-3 overtime win the following day against Minnesota.

But just as they notched their first win of the season, it was followed by three losses over the course of the next month and a half. As the season went on, Metro had trouble stringing together more than two wins at a time and saw another three-game losing streak later in the season.

The Riveters went 4-8 in their new home rink, ProSkate Ice Arena in Monmouth Junction, NJ. They split their season on the road, winning six of 12.

During the regular season, the Riveters went 0-7 against the dominant Boston Pride, but split the season series (3-3) with the eventual second-place Whitecaps. Metro won three of five games against the Whale, and four of six against the Beauts.

Their regular-season finish meant that they met the Whitecaps in the Isobel Cup semifinal. It was an incredibly tight game, and the Riveters fell by just one goal in a 1-0 overtime loss that ended their season and sent Minnesota on in the quest for the championship.

↑ While all NWHL players are currently on one-year contracts, the influx of new blood into the Riveters and their immediate impact (Leary, Cornine, Rushton, etc.) is promising. These players contributed immensely to the team's turnaround and, if they stick around, will be a big part of the organization going forward.

↓ The Riveters had some big losses over the course of the season, from a 9-2 loss to Minnesota to losses of 7-2, 8-3, and 5-0 to the Pride. These are games that seemingly weren't even close. On the flip side, however, there were multiple losses where the Riveters did manage to keep things close. But when they weren't close games, they were usually big blowouts.

↑ Sam Walther was huge in net for the Riveters this season. The team lost all three of its previous netminders over the offseason, but Walther came in and put up a 3.74 GAA and .892 save percentage and kept her team in many games.

↓ Something to work on in the future: overtime play. The Riveters saw overtime in six games this season, and lost four of those – including, of course, the semifinal.

After the Riveters lost the NHL partnership of the New Jersey Devils, they also lost their home rink. That, combined with a very poor regular season record, must have been very disheartening for fans, players, and team staff alike. As I said earlier, the difference between last season and this season is like night and day, in a good way. Even though the end results of this season weren't quite what Ivo Mocek and his crew were aiming for, it's an incredible and notable improvement.

Consistency from this season heading into the next season will be key, and the Riveters appear to be on a good path in that direction. The team has already re-signed six players from this past season, including captain Madison Packer and some of their leading producers: Cornine, Morse, Kilduff, Hutchison, and Rushton.

Things to consider in the offseason for the Riveters: