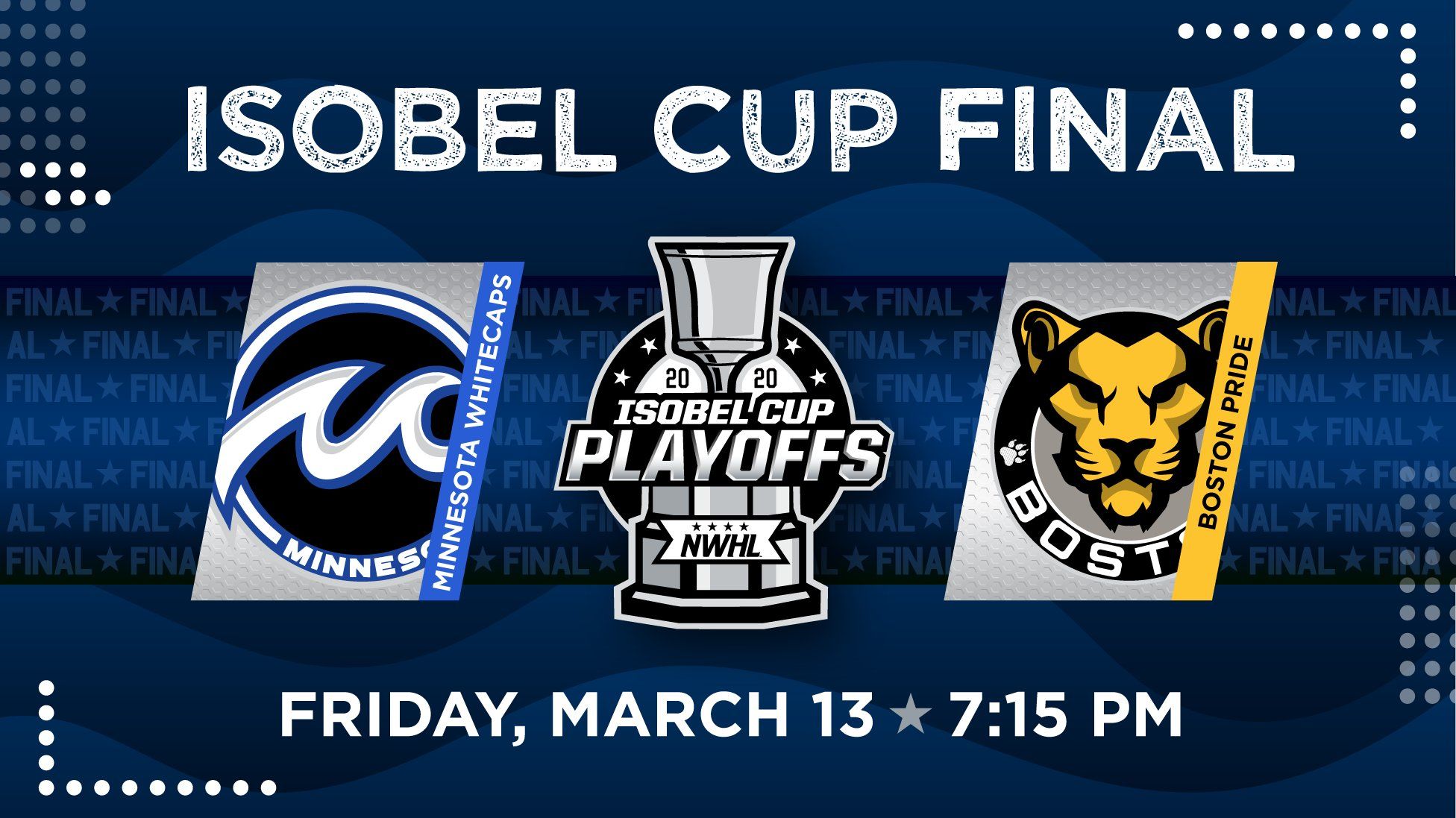 The top two teams in the NWHL – the Boston Pride and the Minnesota Whitecaps – each won their respective playoff games and will now face off for the Isobel Cup. Whichever team wins will become the first two-time champion in NWHL history; the Pride previously won in 2016, while the Whitecaps won in 2019.

The Isobel Cup Final will be played on Friday, March 13 at Warrior Ice Arena in Boston. Puck drop is set for 7:15 PM Eastern.

Update: The NWHL has indefinitely postponed the Isobel Cup Final. Below is the official statement from the league:

The NWHL announced today that the 2020 Isobel Cup Final between the Boston Pride and Minnesota Whitecaps scheduled for Friday, March 13 at Warrior Ice Arena has been postponed. At the appropriate time, the NWHL, Pride and Whitecaps will reschedule the Isobel Cup Final for a later date in Boston. We want to host the Isobel Cup Final in an environment where our fans, players, and everyone working or attending our championship game can feel safe. The progression of COVID-19 in many parts of the world, including the U.S., resulted in the league making this decision in the interest of public health and the wellbeing of all involved in the event. Fans who purchased tickets for the Isobel Cup Final will be able to use them for the rescheduled date. To request a refund, please email ticketing@nwhlhq.com. The NWHL thanks everyone for supporting our league throughout a spectacular 2019-20 season, and we appreciate your understanding and patience. We are determined to present the Isobel Cup Final that the Pride, Whitecaps and the fans deserve.

How They Got Here

This season was the most dominant in Pride history, as the team went 23-1 during the regular season. They led the league in goals-for (120), had the fewest goals-against (43), and at times seemed absolutely unstoppable. Boston began the season with a 19-game winning streak, and didn't suffer their first (and only) loss until January 25.

Strength in all areas – goaltending, offense, and defense – makes the Pride the most dangerous team in the NWHL, and it's no surprise that they've made it to the championship game. Pride players led the league in points, assists, and game-winning goals, while netminder Lovisa Selander led the league in wins, save percentage, and goals-against average during the regular season.

The Pride took care of the Connecticut Whale in the Isobel Cup semifinal, besting them by a score of 5-1. Emily Fluke, Jillian Dempsey, Christina Putigna, Kaleigh Fratkin, and Jordan Juron all scored in the win, but it remained close for much of the match. Boston was up by only one goal for quite a while, but poured it on in the final 11 minutes of the game, including an empty netter and a late power play goal.

The Whale had previously beaten the Buffalo Beauts by a score of 5-3 in the play-in game.

Minnesota's season was a little more up and down, but they finished the season with a 17-5-2 record, a full 13 points ahead of the third-place Riveters. Their plus-54 goal differential was second-best in the league; the same is true of their 106 goals-for, and 52 goals-against. Although the Whitecaps won their first game of the season, they followed it with a three-game losing streak.

They then won seven of their next nine games, and overall won nine of their last 10 games in the regular season. Led by the offensive powerhouse Allie Thunstrom, who led all individual NWHL players with 24 goals in the regular season, and supported by the strong goaltending of Amanda Leveille, the Whitecaps once again proved to be contenders in just the team's second season in the NWHL.

They've made it to the championship game, but it was just one goal – from Thunstrom, no less – that got them here. The Whitecaps narrowly defeated the Metropolitan Riveters by a score of 1-0 in overtime during the Isobel Cup semifinal. The teams remained locked at zero after 60 minutes of play, despite several power-play chances and great scoring opportunities on both sides. Thunstrom finally found the back of the net 6:39 into the first overtime, sending her team on to Boston.

As I've said before, the Pride only lost one game all season – but that loss came to the Whitecaps, so it isn't unheard of that this championship game could go either way.

Boston won the first meeting of the season 3-1, then topped the Whitecaps 5-2 the following afternoon. Minnesota's win came in a 4-3 victory on January 25, ending Boston's impressive unbeaten streak; the Pride rallied back for a 4-2 win the next afternoon.

While both Boston and Minnesota have strong offense, the teams also have strong goaltending in common. Lovisa Selander went 17-1 in her first season in the league, accruing a league-best 1.71 GAA and .941 save percentage. She also recorded two shutouts and played over 1,000 minutes over the course of the season. In the semifinal game against Connecticut, Selander allowed one goal on 30 shots faced.

At the other end of the ice, Amanda Leveille knows what it takes to win, as she searches for her third Isobel Cup championship after previously winning with Buffalo (2017) and Minnesota (2019). In her second season with the Whitecaps, Leveille put up a 2.08 GAA and .935 save percentage, appearing in 24 games and playing over 1300 minutes. Her regular-season record: 16-5-0-2.

Keys to the Isobel Cup

Boston and Minnesota are similar in many ways. Both teams have a significant core of returning players – including Dempsey, Brand, Thunstrom and Leveille –  and didn't see as much player turnover as other teams in the NWHL following the founding of the PWHPA.

Minnesota was the least-penalized team during the regular season, so expect that to continue into the championship game. Although the teams were separated by 10 points in the regular-season standings, they were both generally dominant and are both on four-game winning streaks heading into the final game. They're also both 9-1 in their last ten games.

Minnesota, of course, has a slight disadvantage here: travel. The Whitecaps have to make their way to Boston, but thankfully, that'll be a flight rather than a bus. Still, the Pride have home-ice advantage and will almost certainly be playing in front of a sold-out crowd in their favor.

Expect big performances from both goaltenders as they try to stifle the other team's offense. If the Pride can solve Leveille – or the Whitecaps, Selander – perhaps it becomes a little more wide open, but otherwise, I'd expect a one-goal difference isn't out of the question.