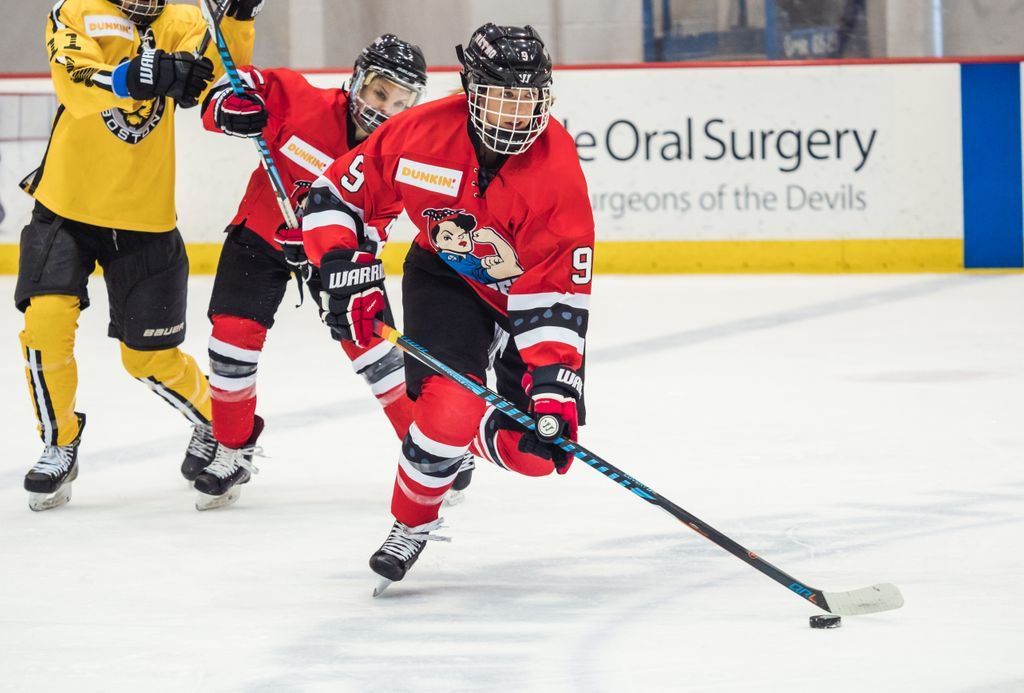 The next team preview focuses on the Metropolitan Riveters.

Last season was a rough one for the Riveters. The then-defending Isobel Cup champions fell to fourth in the league and managed to win only four games all season, including two at home. They also allowed a league-high 65 goals, while managing to score only 32. The Riveters made it to the semifinals after besting Connecticut in the play-in game, but dropped a 5-1 decision to the eventual champs in Minnesota.

This season's Riveters team is vastly different from last season's. Nearly the entire team is not returning, including leading scorer Amanda Kessel and offensive powerhouse Audra Richards, who has signed with Minnesota. Madison Packer, a key piece of their offense last season with 13 points in 15 games, is returning and has just been named team captain. So is defensive mainstay Kiira Dosdall. Still, this is overall a very different team.

Along with the Beauts, the Riveters are perhaps the biggest question heading into this NWHL season. There's been so much roster turnover that you can't really say what to expect. In addition, the Riveters also have a new head coach in Ivo Mocek; he replaces Randy Velischek (finally) and becomes the third head coach in team history. Kate Whitman Annis will serve as the team's general manager.

The Riveters still have up to seven open spots on their roster, so it's not out of the question to expect a few additional signings in the coming days or weeks. Of note, they've only got two goaltenders signed (Walther, DeMartino) and would likely add a third.

Speaking of goaltending, that may be one of the biggest areas to watch this season when it comes to the Riveters. Katie Fitzgerald has historically been spectacular in net, but as part of the PWHPA, she isn't back in the NWHL this season. That leaves a huge gap on a team that already has a lot of gaps with departing players, and it'll be up to Sam Walther (previously with Connecticut) to fill that role.

Losing other key players such as Richards, Lawler, Ryan, and Picard,  the Riveters are certainly in a very different position than they were at this point last season.

To put it bluntly: last season was a letdown for the Riveters. To go from a 13-3-0 record to 4-12-0 is, well, less than ideal. They also faced issues in the postseason, when travel issues forced the postponement of their semifinal game in Minnesota. The rescheduled date meant several players had to miss the game due to prior commitments, and in the end, it cost them.

One area where the Riveters will look to improve this season: penalty kill. The team was worst in the NWHL last season, with 10 power-play goals against. Overall, they'll need to boost their offensive output and get stronger defensively, and perhaps with a new head coach in tow, that can happen. They did pull off a huge 10-3 preseason win over Long Island University – but it was also LIU's first-ever game.

The Riveters will also have a new home rink this season. Due to the dissolution of their partnership with the NHL's New Jersey Devils, returning to the Barnabas Health Hockey House was not an option. As a result, the team will move about 34 miles southwest to ProSkate in Monmouth Junction, NJ. They'll also have a new jersey design, returning to their original colors.

Finally, as the NWHL moves its online broadcasts to Twitch, Matt Falkenbury will return as part of the team's broadcast crew. This season, he'll be joined by former NWHLer and NWHLPA head Anya Packer (née Battaglino).