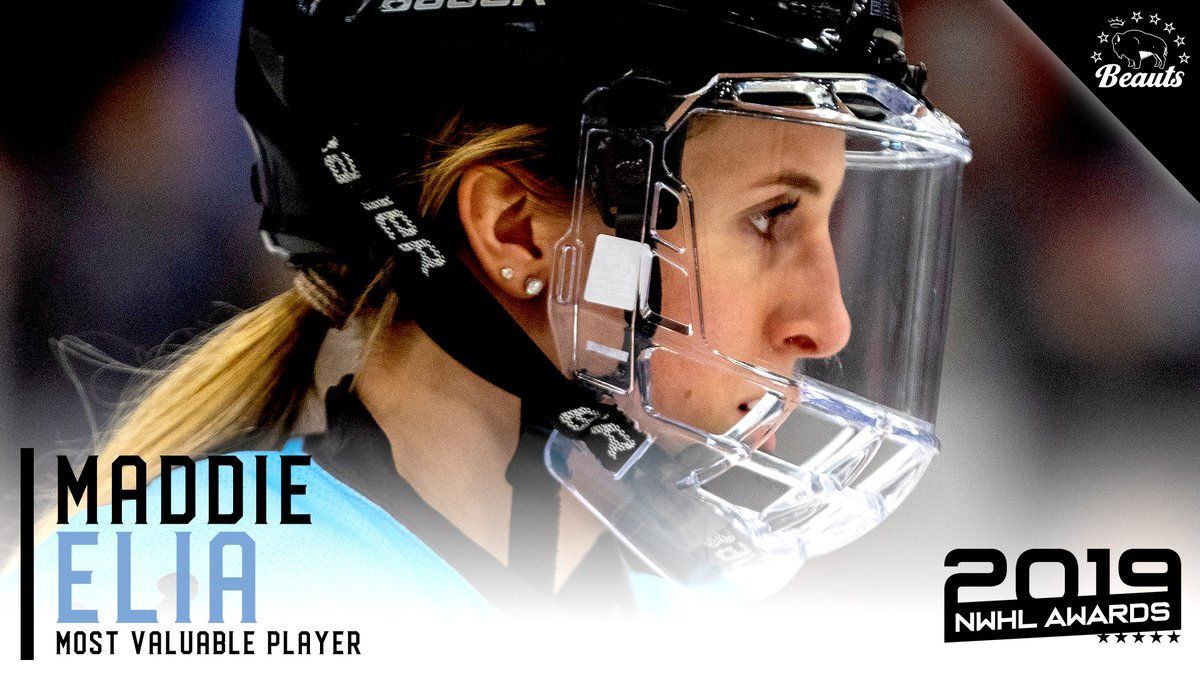 The NWHL has announced the winners of its end-of-season awards, as voted on by players, media and fans.

Here is the list of awards, finalists, and winners.

Fans' Three Stars of the Season

More than 7,000 votes were cast by fans to determine the Three Stars of the Season. Boulier, Mrázová, and Packer were all honored by the fans after strong seasons with their respective teams. All three also participated in the NWHL All-Star Game in Nashville this season. This award isn't necessarily just for on-ice success, but for off-ice activities and fan interaction, too.

"It was a great year of hockey across the league, so to be recognized by those who watch us on a daily basis means a lot to me," Packer said in the league's release.

It was the first time any of those three players have been named the Fans' Three Stars of the Season. Previous winners include Harrison Browne (2x), Amanda Kessel, Hayley Scamurra, Sophia Agostinelli, and Anya Battaglino.

This is the second-straight year that Dempsey has won the Denna Laing award, named after her former Boston Pride teammate. Dempsey served as captain this season and was recognized for the qualities of perseverance, sportsmanship, and dedication to the sport of hockey.

"I can understand why the players would believe strongly that Jill deserved the Laing Award for the second straight year," said NWHLPA executive director Anya Battaglino in the league's release.

"In my view, in a league filled with incredible athletes and role models who devote so much of themselves to the game, no one is more than deserving of an award named after Denna Laing than Jillian Dempsey." - Battaglino

Dempsey's 10 goals were tied for the team lead.

NWHLPA Player of the Year

The players have selected Beauts forward Hayley Scamurra as the NWHLPA Player of the Year. She led the league with 20 points (10G, 10A) in 16 games in her sophomore season.

Scamurra's 10 goals were tied for second in the league. She also recorded 73 shots on goal and had a plus-16 rating, which was third-best in the NWHL. This is the second year Scamurra has been recognized, as she was named Rookie of the Year after last season. She has also participated in two NWHL All-Star Games.

Babstock, Brandt, Hughson, Sass, and Souliotis have been recognized as those "most actively applying the core values of hockey to her community, as well as growing the game and improving hockey culture."

These five players were recognized as role models both on and off the ice and for their work in the community. Babstock has worked with the Indigenous community both in Ontario and in Buffalo to expose young girls to the opportunity to play professional hockey.

Sass and Souliotis have also worked extensively with their local communities.

Newcomer of the Year

Jonna Curtis burst onto the NWHL scene, recording 19 points in just 16 games with the Minnesota Whitecaps. She led her team in goals, assists and points. Her eight goals were third-most in the league, while her 11 assists were also third, behind only Amanda Kessel, Haley Skarupa, and Blake Bolden.

Curtis averaged 1.19 points-per-game in her inaugural scene. Prior to joining the Whitecaps, she played for the University of New Hampshire.

"Jonna is a great choice for this award," said Whitecaps co-head coach Ronda Engelhardt in the league's press release. "[She] was one of our most consistent forwards. She is a very tenacious player who plays with a lot of heart. She is also very shifty, making it difficult to defend her."

Note: this award was previously known as Rookie of the Year and was won last season by Hayley Scamurra. The league elected to change the name of the award to accurately reflect players who are newcomers to the NWHL but who are not new to the world of professional women's hockey.

Goaltender of the Year

Szabados was one of several spectacular goaltenders in the NWHL this season. Though she certainly deserves the honor of Goaltender of the Year, many others were underrated, including Burt and Räisänen who were essential to their team's successes.

Szabados recorded a 1.49 GAA and .934 save percentage this season, going 6-3-1 with two shutouts. As part of the tandem with Nicole Hensley, Szabados helped the Beauts allow the fewest goals in the NWHL (25). She was also captain of the winning team at the NWHL All-Star Game.

"Shannon's goalie of the year recognition from the NWHL is one we at Hockey Canada are very proud of," said Gina Kingsbury, director of women's national teams for Hockey Canada in the NWHL's release. "Shannon has been a member of our Hockey Canada program for many years and has been a big part of our success as a program. Hockey Canada would like to congratulate Shannon on her excellent season with the Buffalo Beauts and share the pride we have in her accomplishments."

Defender of the Year

Bolden, in her first season with the Beauts, joins her teammates in getting recognized for a stellar season. Half of the first-place votes for Defender of the Year went to Bolden, who played on a defensive pairing with Emily Pfalzer for much of the season. Bolden helped bolster Buffalo's blueline (try saying that three times fast!) but also contributing offensively. She tied for the league lead among defenders with 13 points.

Bolden was also named to the NWHL All-Star Game and won the Hardest Shot title with an 80 mph shot.

Elia eluded a lot of chatter this season about the best players in the NWHL, but have no doubt – she was certainly one of them. In her sophomore season, she led the league with 12 goals, and recorded 19 points, good for second in the league. She recorded seven multi-point performances over the course of the season, including four points in a 4-0 win over Minnesota.

She also ranked second in the league with 181 faceoff wins.

"My teammates are so important to me and obviously the hard work of our entire team is the reason for any success that I experienced. It was a great step forward for myself personally and I feel that the work I put in to round out my game worked out in a positive way," Elia said.

Despite the success she had, Elia was left off the All-Star Game ballot, so it's nice to see her finally get recognized for what an incredible year she had. Elia received more than half of the votes for Most Valuable Player and won in a landslide.