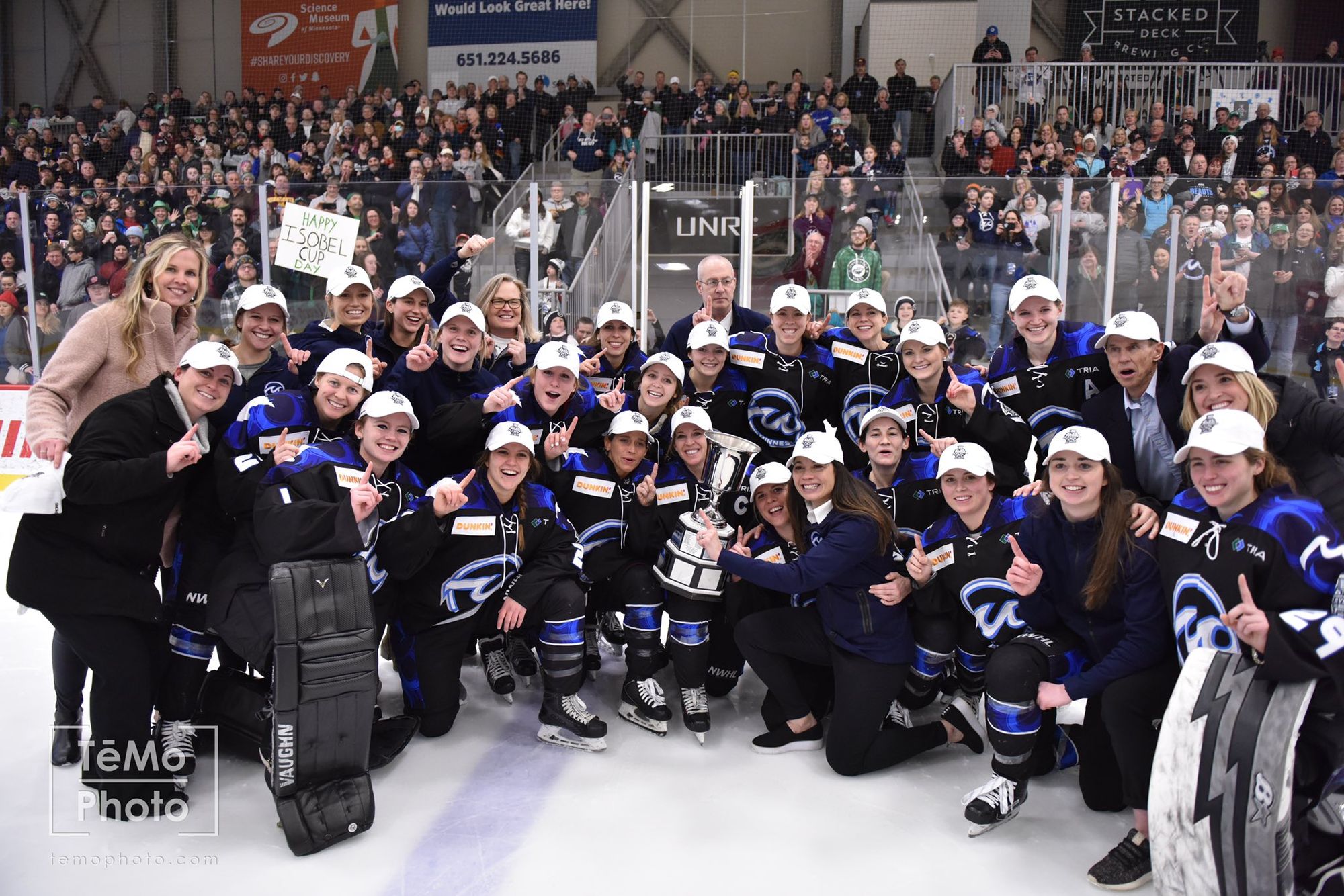 Coming into the NWHL season, it was expected that the Minnesota Whitecaps would be a very good team. Given their storied history, existing chemistry, and the addition of a handful of talented players, it's little surprise that the team not only led the league during the regular season, but captured the Isobel Cup in their inaugural year with the NWHL.

What helped the Whitecaps start off this season strong was their roster, which was comprised of many players who were already part of the organization during its time as an independent team, prior to joining the NWHL.

Among those returning: Allie Thunstrom, who put up nine points in 16 games this season; Amy Menke, who recorded 10 points (4G, 6A) in 15 games; and both Winny Brodt Brown and Chelsey Brodt Rosenthal. Meaghan Pezon, Kalli Funk, Haylea Schmid, and Tanja Eisenschmid were among the other returning players. Julie Friend also returned in net.

The chemistry between these returning players, as well as the several Olympians who joined or re-joined the team this season, certainly helped foster a winning group in Minnesota.

But the Whitecaps also had several new players, including goaltender Amanda Leveille. Leveille joined her hometown team after spending the last two seasons in Buffalo; she went 11-4-0 with a 2.09 GAA and .923 save percentage in her first season with Minnesota.

Olympians including Lee Stecklein, Hannah Brandt, and Kendall Coyne Schofield also joined the Whitecaps this season. Stecklein and Brandt each recorded 11 points; Coyne Schofield had 15 points. Jonna Curtis was named the NWHL's Newcomer of the Year after putting up an impressive 19 points (8G, 11A) in just 16 games.

The Whitecaps started off their inaugural NWHL season strong, winning each of their first six games. Whether they had home ice or not, it didn't matter. Minnesota beat the Riveters with a cumulative score of 7-1 in their first two games at TRIA Rink. The teams traveled to New Jersey for a pair of games, both of which went Minnesota's way as the Whitecaps outscored the Riveters 11-5.

Upon returning home, Minnesota beat the Beauts in a pair of one-goal decisions. Their first loss of the season didn't come until December 1, when the team returned to the ice after a month off from NWHL action. The Whitecaps dropped a pair of games to Boston, including a 5-1 loss and an uncharacteristic 7-2 decision.

Minnesota then went on to win six of their last eight games, including a pair of shutouts over the Connecticut Whale. One of those games was a decisive 9-0 victory on January 20. Over the course of that stretch, the Whitecaps also beat Connecticut 2-0 and 4-1, beat Boston 2-1 and the Beauts 2-1.

Minnesota headed into the postseason on a high note, and continued their streak there. They beat the Riveters in a rescheduled semifinal before winning the Isobel Cup over the Beauts in overtime, 2-1.

↑ The Whitecaps were strong finishers. They had 23 of their 53 goals in the regular season in the third period, tied with Boston for the most goals in the final frame.

↓ Minnesota didn't have the most successful power play in the league. They recorded only four power-play goals, tied for fewest in the league, and were just 7.5% on the power play. But on the flip side, they also recorded four shorthanded goals, most in the NWHL. (The other four teams each only had one shorthanded tally.)

This season, the Whitecaps were led by co-head coaches Ronda Engelhardt and Jack Brodt, with assistant coach Laura Slominski. Brodt had already served as the team's head coach prior to its entry into the NWHL, so it was unsurprising to see him in the role.

Before the season began, word had it that Robb and Shivaun Stauber would be the team's co-head coaches, but that was never confirmed, and as it turned out, the parties never actually signed a contract.

Given that he was already with the team prior to its NWHL days, and remained with them this season, it's natural to expect that Brodt would be back behind the bench with Minnesota next season unless something changes.

The Whitecaps have a lot to live up to after not only leading the league in their first season, but also winning the Isobel Cup. They were a dangerous team to play against and at times, it seemed like they were unbeatable and wouldn't lose a game all season.

The Whitecaps were also in a unique position this season, as they played a handful of exhibition games throughout the season against collegiate teams. This extended their traditions from their time as an independent team, but it was interesting to see them intertwine these games with the NWHL schedule and maintain somewhat of a "practice" roster with additional skaters.

After having a taste of the championship, it'll be hard for the Whitecaps to top their inaugural NWHL season – but they'll definitely try to find a way when fall rolls around.