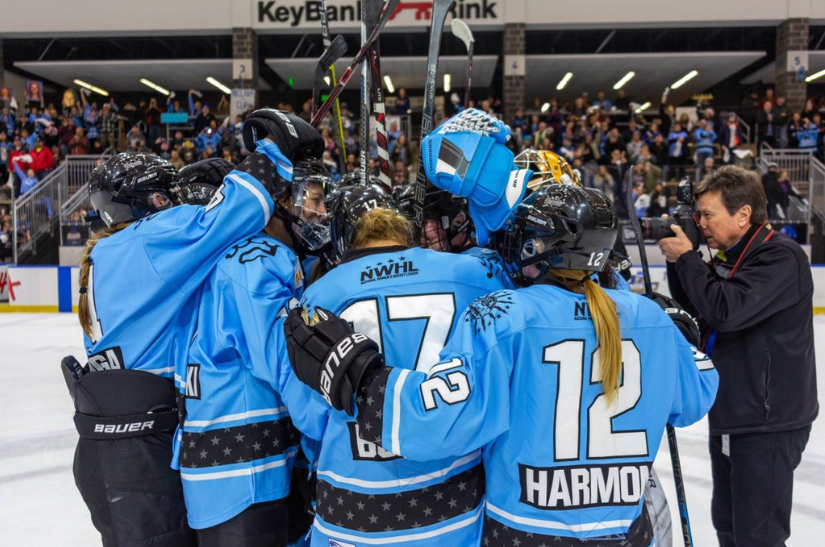 The NWHL's Buffalo Beauts continued their streak of never missing an Isobel Cup Final, but once again, the team found itself on the losing end – despite a strong regular-season effort.

It was an interesting year for the Beauts, as they underwent a bit of a roster overhaul with a pair of new goaltenders, then lost their long-time coaches in the middle of the season. But Buffalo finished out the season strong; they just couldn't quite get the championship.

The Beauts had a nice mix of returning players, NWHL rookies, Olympians, and players from other teams on their roster this season. It's easy to see why this combination of players made for offensive success.

Although Buffalo did lose one of its leading scorers in Kourtney Kunichika, it retained some of its other big names, including Hayley Scamurra and Maddie Elia, both of whom were huge offensive contributors to the team this season. Scamurra led the team with 20 points, including 10 goals, while Elia recorded 12 goals and 19 points overall. They were both at the top of the league in scoring as well.

Joining her were a handful of new players, including Kelly Babstock (from Connecticut) and Blake Bolden (returning to the NWHL after spending a season with HC Lugano in Switzerland). Bolden recorded 13 points (1G, 12A) in 16 games this season and was a huge defensive asset for the Beauts, often playing alongside Pfalzer.

Other Olympians included Dani Cameranesi and a pair of goaltenders in Shannon Szabados and Nicole Hensley. This overhaul in net for the Beauts turned out to be huge, as they lost Amanda Leveille to the Minnesota Whitecaps. Both, of course, were huge for Buffalo. Szabados went 6-3-1 with two shutouts, while Hensley went 5-1-0 with a pair of shutouts.

Rookies Savannah Harmon, Annika Zalewski, and Julianna Iafallo also signed on with the Beauts this season, and all three made a name for themselves. Iafallo had 13 points (6G, 7A) in 16 games, while Zalewski had 12 points. Harmon recorded seven points.

Home ice was very kind to the Beauts this season, as they went undefeated at Harborcenter.

Buffalo opened the season with a home-and-home against the Connecticut Whale, where they outscored the Whale 11-0. They then traveled to Minnesota and dropped both games against the Whitecaps, both one-goal decisions.

Their losing streak continued with a 4-1 loss in Boston before the team rebounded the following day for a 5-2 win against that same Pride team. The Beauts opened December with a 3-1 win over the Connecticut Whale, but then had a lengthy break off. This is also the time during which both of their co-head coaches were relieved of their duties, and the team found themselves under a new regime when they hit the ice again.

They returned to action and had their only loss in Buffalo on December 29, a 2-1 loss to the Whitecaps at KeyBank Center. The Beauts were back at Harborcenter the next day against Minnesota and won 4-0, which kicked off a seven-game winning streak that lasted most of the rest of the season.

During that stretch, the Beauts beat Boston twice, the Riveters three times and the Whale once. They outscored their opponents 30-7, including a pair of shutouts. Buffalo couldn't keep the streak going, however, and ended the regular season with a 4-3 loss to the Riveters in New Jersey.

The Beauts found themselves finishing the NWHL season in second place. They easily took care of the Pride in the Isobel Cup semifinal and went to Minnesota for the championship. Unfortunately, for the second straight season, Buffalo came out of the championship game on the losing end, as they fell to the Whitecaps 2-1 in overtime.

↑ The Beauts scored 57 goals in the regular season, just three shy of the Whitecaps. Also, Buffalo's scoring was pretty well spread out over 60 minutes. 19 of their goals came in the first period, 20 in the second, and 18 in the third period.

↓ More about this below, but the Beauts dropped both of their long-time co-head coaches after going 3-3 to start the season. While 3-3 is by no means a terrible record, it wasn't what was expected of the team, what with its new Olympian additions and all, and the coaching change certainly seemed to shake things up.

↑ One place where the Beauts were very good this season: taking their shots. They took 546 shots on goal over the course of the regular season, more than 50 more than the next team (Minnesota, 491) and more than 200 more than the lowest team (Connecticut, 324).

↓ The Beauts took the most penalties of any NWHL team this season, with 162 recorded PIMs. But they had a pretty successful PK (91.7%), second-best in the league.

The Beauts had a tumultuous season when it came to off-ice matters. In early December, with the team 3-3 to start off the season, general manager Nik Fattey announced that co-head coaches Ric Seiling and Craig Muni were both relieved of their duties. In a related move, Fattey named himself assistant coach and named former NHLer Cody McCormick as interim head coach.

Just over a month later, Fattey suddenly resigned from his positions with the Beauts. The team's hockey operations were then reduced to just McCormick, who now found himself in the head coach and general manager roles.

Just days later, The Buffalo News reported that Fattey's unexpected resignation followed "an internal investigation into whether the two men sexually harassed female employees after a holiday party in December."

Over the course of the last few months of the season, McCormick was joined behind the bench by other coaches including Sean Wallace, who works alongside the interim head coach at Harborcenter and the Academy of Hockey. Goaltending coach Ryan Vinz also remained with the team.

It's unclear at this point what the team's plans for its coaching staff in the future are.

The Beauts have made it to the Isobel Cup Final in every year of the NWHL’s existence, but they’ve only won the championship once. It's uncertain what the coaching staff will look like next season, but whoever steps behind the bench will look to lead Buffalo to finally hoist the Isobel Cup again.

It'll also be interesting to see which players return to the Beauts. Sarah Edney and Sarah Casorso both retired mid-season, but at this point, those are the only players we know who won't be back in the Beauts' blue, or in the NWHL.