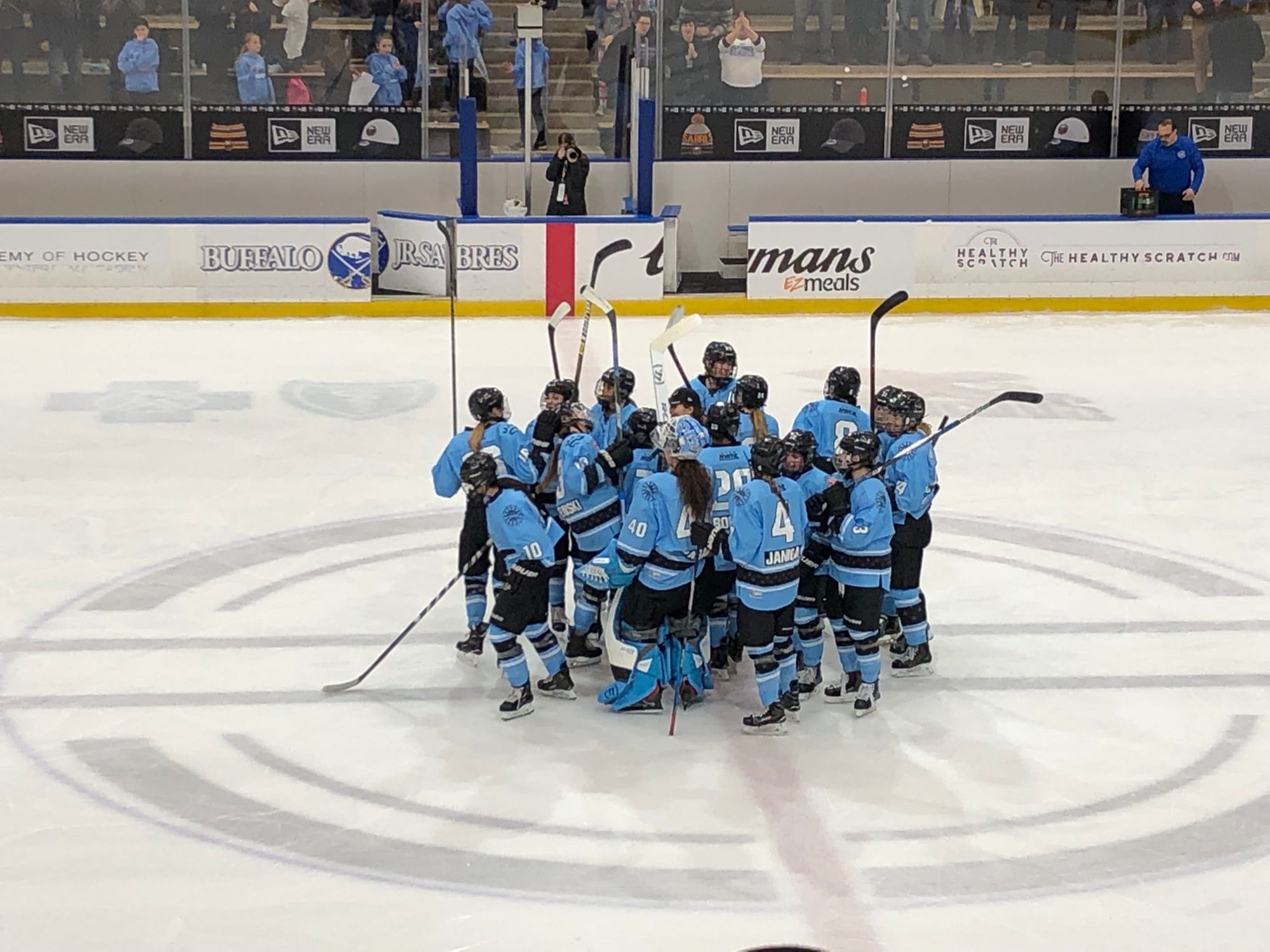 The Boston Pride moved into first place in the National Women's Hockey League with a win over the Metropolitan Riveters, while the Buffalo Beauts beat the Connecticut Whale in other NWHL action this weekend. The Minnesota Whitecaps were off this week.

Less than 24 hours after the team's big shakeup in coaching, the Beauts hosted the Whale in their third meeting of the season. Buffalo continued its dominance over Connecticut, capturing a 3-1 victory on Saturday afternoon at HARBORCENTER. The Beauts haven't lost to the Whale since February 26, 2016.

Buffalo's penalty kill got several early tests Saturday, as the Beauts were served with three penalties in the first 12 minutes of the game. They were able to hold the Whale to just one shot in those three power play opportunities, which would help swing momentum Buffalo's way.

With under five minutes to play in the opening period, the Beauts found their legs and some sustained zone pressure. Finally, with 1:07 remaining in the first, Buffalo got Meeri Räisänen down on one side of the net. The puck came loose, and Julianna Iafallo pounced on it for her third goal of the season.

Despite having three power plays, the Whale registered only two shots on goal on Shannon Szabados in the opening twenty minutes. Scamurra made it 2-0 just 2:16 into the second period, as she picked up a pass from Lisa Chesson in front of the net and slammed it home.

The Whale finally got on the board with under seven minutes to play in the second, as Katerina Mrázová split Buffalo's lead in half. Despite the goal against, Buffalo put a lot of pressure on Connecticut and doubled them in shots.

Emily Janiga added her first goal of the season – nd first NWHL goal since March 19, 2017, when the Beauts won the Isobel Cup over the Boston Pride. Janiga spent last season playing in China with the CWHL.

Szabados needed to make only 10 saves in the win. Räisänen made 32 saves.

It was a close game between the Metropolitan Riveters and Boston Pride on Sunday afternoon, though the final score doesn't exactly reflect that. The Pride scored three times in the final three minutes of play en route to a 5-2 win. With the win, the Pride have tied the Whitecaps in points – but with a 2-0 series edge, Boston takes first place in the NWHL.

The Pride are notorious for their quick starts, but it took them nearly nine minutes of game action to get a puck behind Riveters netminder Kim Sass. Amanda Pelkey made it 1-0 on a shorthanded breakaway after the Pride intercepted a pass in their zone.

Madison Packer tied the game later in the first period, after she passed the puck to Amanda Kessel, who shot it to the net. Packer was able to get in front and make the tip to put it behind Katie Burt and make it a 1-1 game.

Dana Trivigno regained the lead for Boston late in the second period, after she slapped in the puck after a no-look, behind-the-back pass from teammate Kaleigh Fratkin. The pass actually bounced off the frame of the net and landed on Trivigno's stick for the goal.

The Riveters continued to battle hard, and tied the game once again, this time on their own shorthanded rush early in the third. Alexa Gruschow skated in quickly and took advantage of Burt, who wasn't ready for the shot.

The teams remained locked at two until the final three minutes of play. That's when things turned in Boston's favor in a big way. Penalties to Gruschow and Packer left the Riveters to face a 3-on-5. They couldn't contain the Pride, as Fratkin broke the tie with 1:54 left in regulation.

Mallory Souliotis added another power-play goal less than 30 seconds later. McKenna Brand potted the empty-netter, and Boston skated off with a 5-2 win.

Sass made 31 saves in the loss for the Riveters, while Burt stopped 21 of 23 shots faced for the Pride.

The NWHL returns to game on action on December 29 when the Beauts host the Whitecaps. The teams rematch the following afternoon, while the Pride and Whale also face off in Connecticut.