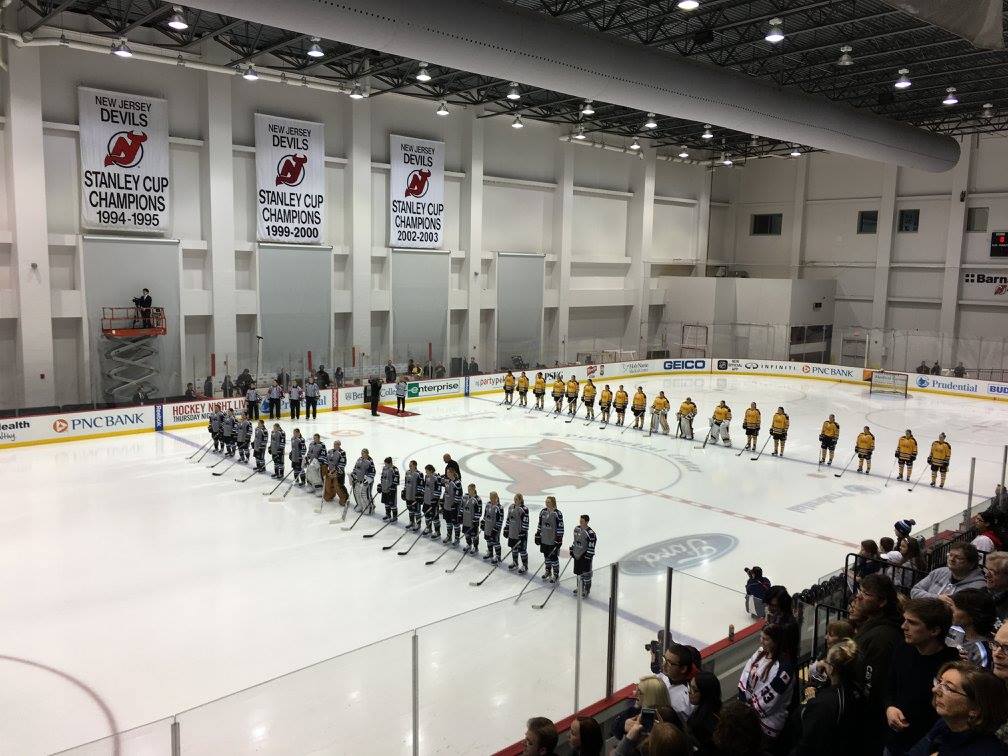 As the NWHL season grows ever closer, fans and media alike can now prepare, as the league released its season schedule on Thursday morning.

The season will open on Saturday, October 6 and close on Sunday, March 3. All games will be played on Saturdays or Sundays.

The NWHL All-Star Weekend will be held February 9-10, 2019. The location will be announced at a later date.

Here are some of the highlights of the 2018-19 NWHL schedule:

The Buffalo Beauts will host the Minnesota Whitecaps in a Saturday matinee on December 29 at KeyBank Center, home of the NHL's Buffalo Sabres. The Beauts game will be the first of a doubleheader at the rink, with the Sabres hosting the Bruins later that day.

The game will mark the second NWHL game to be played in an NHL rink after the Metropolitan Riveters played their home opener last season at the Prudential Center.

Meanwhile, Buffalo also announced that season tickets will be available for $120. The Beauts will host eight home games, including the game at KeyBank Center.

With support from the NHL's Pittsburgh Penguins, the Riveters and Connecticut Whale will face off at the UPMC Lemieux Sports Complex in Cranberry, Pennsylvania at 3:30 PM Eastern on Sunday, December 2. The facility is the practice facility used by the Penguins.

The game will be the third NWHL event held at the Lemieux complex. The league held its All-Star Weekend there in 2017.

"Pittsburgh is a special place for my family, so I'm really looking forward to being with the Riveters in front of the city's great hockey fans on December 2," said Riveters forward Amanda Kessel.

"The Penguins organization has been an amazing partner for the NWHL and tremendous for the development of our sport across all levels," Kessel said.

General admission tickets will be available for $20. The Whale will be the home team.

The Minnesota Whitecaps will make their NWHL debut against the Riveters on Saturday, October 6. The Beauts and Whale open their seasons the following day in Connecticut, while the Pride have to wait until October 13 to kick things off.

An Isobel Cup Final rematch will take place on Saturday, January 12, the first meeting of the season between the Riveters and the Beauts since last year's championship game.

Amanda Leveille will make her return to Buffalo when the Whitecaps visit the Beauts in the game at KeyBank Center on December 29. They'll also face off the following afternoon at HARBORCENTER.

Minnesota has several gaps in their NWHL schedule, including one from October 28 until December 1. It is expected that they will play several exhibition games against college teams during that stretch.

The Beauts will continue to play at HARBORCENTER, while the Pride return to Warrior Ice Arena. The Whitecaps, as previously announced, will play at TRIA Rink in Saint Paul. The Whale will play at Terry Conners Ice Rink, and the Riveters at RWJ Barnabas Health Hockey House.

More information regarding broadcasting, the All-Star Weekend and Isobel Cup Playoffs will come at a later date.

Miye D'Oench, one of the Riveters' top players from last season, is returning to the team for her third NWHL season. D'Oench recorded 13 points (7G, 6A) in nine games last season, then added two assists in the Isobel Cup playoffs.

"From NHL partnerships to the expansion in Minnesota, the league has taken huge strides in the past year," D'Oench said. "It's an amazing time to be a part of this sport."

The Riveters -- who are still looking for their new head coach -- also signed Chelsea Ziadie. Ziadie, a defender from Harvard, works for Morgan Stanley in Manhattan.

She recorded 16 points, including eight in her senior season, during her time at Harvard.

The Buffalo Beauts have another returning player on their roster for the upcoming season, re-signing defender Sarah Edney.

Edney is entering her sophomore NWHL season after recording six points (3G, 3A) in 14 games last season. She led Beauts defenders in goals, and was second on the team among blueliners in points. She was also part of last season's All-Star Weekend.

"Sarah is a smooth skater and adds hockey sense and experience to our lineup," said Beauts GM Nik Fattey. "She was an important part of our great team last year, and we are excited to have her back in Buffalo."