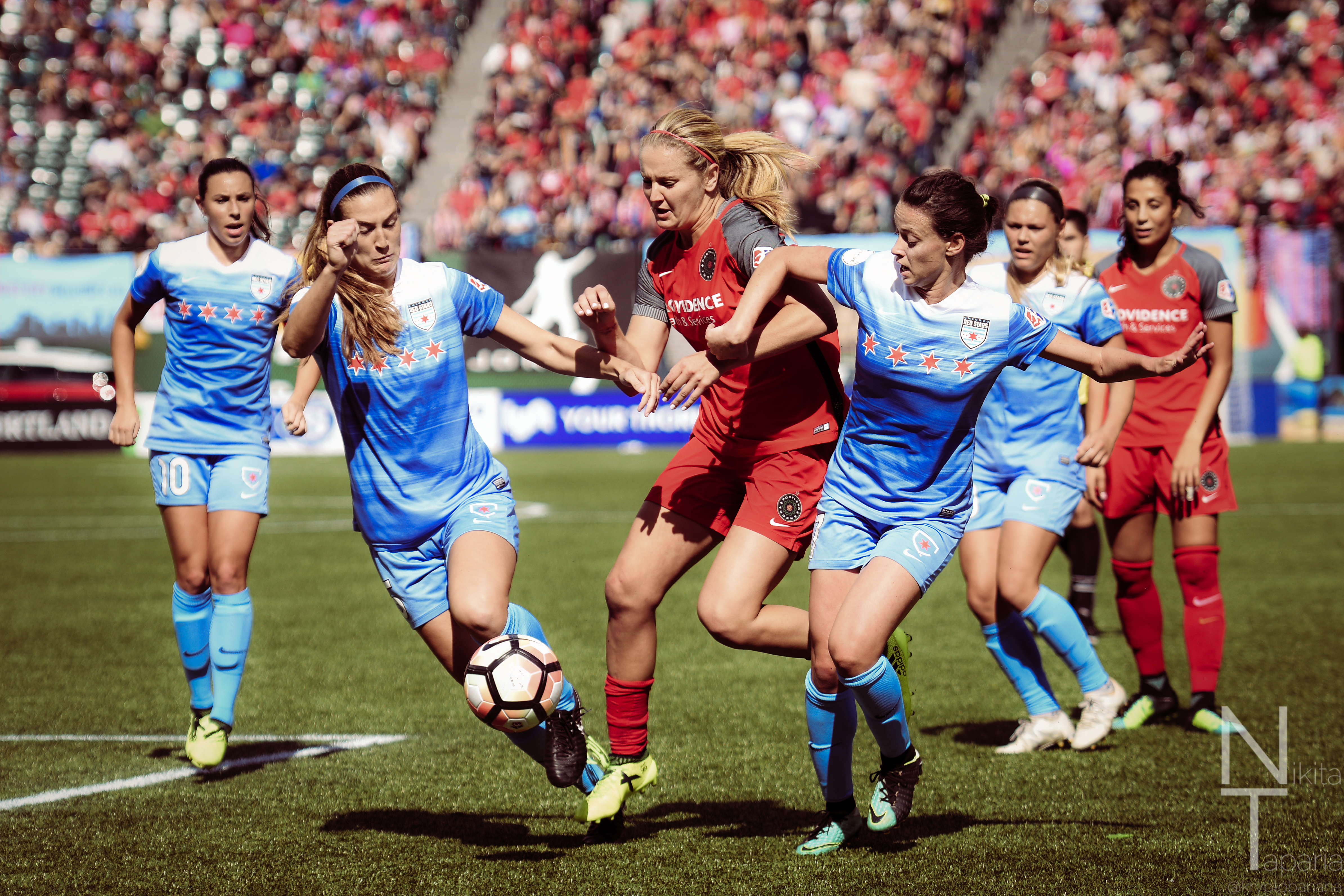 Under the shadow of both the men's World Cup and a rumored midseason trade slated to bring Christen Press back to the States and shuffle various players between Utah, Chicago, and Houston, life went on in the NWSL. This weekend saw a winless streak continue and an undefeated streak end -- and that latter result may be an early sign the league table is about to get shaken up.

There's not too much to say about this one. Some scoreless draws are tense tactical battles; one view holds that a scoreless draw is, in fact, the best result, because it means neither team made a mistake.

That was not this game. Megan Rapinoe took the second-worst penalty kick of the season (after Andi Sullivan's last week against Sky Blue), which Aubrey Bledsoe would have saved even standing perfectly still. Bledsoe had a few legitimately good saves to hold the Reign. Sullivan took a howler of a shot in stoppage time, sending the ball some fifteen yards wide and high despite a beautiful window the Reign defense gave her. Lots of players looked tired, and Rose Lavelle reportedly limped away from the field after the game.

On Pride Night in Cary, the Royals stunned the Courage, handing them their first loss of the season after a stoppage-time goal by Brittany Ratcliffe.

North Carolina looked not quite flat, but certainly flatter than usual throughout the game. The Courage's signature midfield press was met by equally strong pressure from Desiree Scott, Gunny Jonsdottir, and Katrina Gorry; Laura Harvey effectively neutralized any threat from North Carolina's left side in tasking Gorry or Scott with shutting down Jaelene Hinkle whenever she was on the ball. When the Courage did manage to work their way into the box, Crystal Dunn's finishing was uncharacteristically off, and Jessica McDonald's finishing was even more off than usual.

Finally, in the fourth minute of added time, Diana Matheson sent a free kick into the edge of the 18. The ball fell to Ratcliffe, she tripped and fell, Hinkle failed to clear the ball, and Ratcliffe scrambled to her feet to send a beautiful curving shot over the heads of the remaining Courage defenders and into the back of the net.

After the draw between Portland and Chicago, Utah moved up into fourth place with the win. If they end up with Christen Press after this trade, look for their fortunes to continue rising, as this team seems to have everything but a reliable scoring threat in place. Keep an eye on the Royals -- this expansion side could finish a lot stronger than anyone expected them to.

Sky Blue will feel a little hard done by this result in what was one of their best performances to date, but two more or less identical defensive mistakes in the first half didn't go unpunished -- and Sky Blue is now tied with the 2013 Seattle Reign for the longest-ever winless streak to start a season.

The first of those mistakes came early. In the second minute, Sky Blue's defense left Chioma Ubogagu an acre of space from which to send a cross into the box for Sydney Leroux, who was herself wide open a few yards inside the 18. She cut the ball onto her left foot to beat Christina Gibbons and easily sent her shot past Kailen Sheridan. Sky Blue equalized in the 16th minute after Imani Dorsey -- newly signed to a professional contract after getting her first minutes as a national team replacement player last weekend -- robbed Alanna Kennedy in the central midfield, played a one-two pass to Savannah McCaskill, hit the crossbar, and McCaskill put away the rebound.

Then in the 32nd minute, Sky Blue again left Leroux open in the box, where she got on the end of a service by Christine Nairn to score with a diving header. After second Sky Blue equalizer in the 37th minute, the score held at 2-2 until the 83rd minute, when Alex Morgan sent a left-footed cross in to Rachel Hill and she sent a header past Sheridan.

For the second time this year, these two teams faced off while both at less than full strength; the Thorns were missing Tobin Heath, Midge Purce, and Emily Sonnett to injury, while the Red Stars had to leave Sofia Huerta, Samantha Johnson, and Taylor Comeau off the roster pending a trade that will send all three to either Houston or Utah.

Chicago came out swinging, getting several early chances thanks to defensive miscues, largely by Kelli Hubly. Portland got it together defensively after the first fifteen minutes or so, but continued to struggle to play through a crowded midfield and weren't able to put together much going toward goal. In the 42nd minute, Hubly took Sam Kerr down in the box and conceded a penalty; Britt Eckerstrom saved Yuki Nagasato's initial shot, but didn't trap it, and Nagasato put the rebound away.

Mark Parsons subbed Hubly out for Tyler Lussi to start the second half, moving Ellie Carpenter to right back. The young Australian provided immediate stability to the back line, allowing Emily Menges to focus on containing Kerr, which she generally handled well. Portland equalized in the 48th minute with a classic Lindsey Horan goal: Andressinha sent a free kick to the edge of the six-yard box, Horan and Kerr both went up for the header, the ball fell to Horan's feet, and she nailed it to the back of the net.