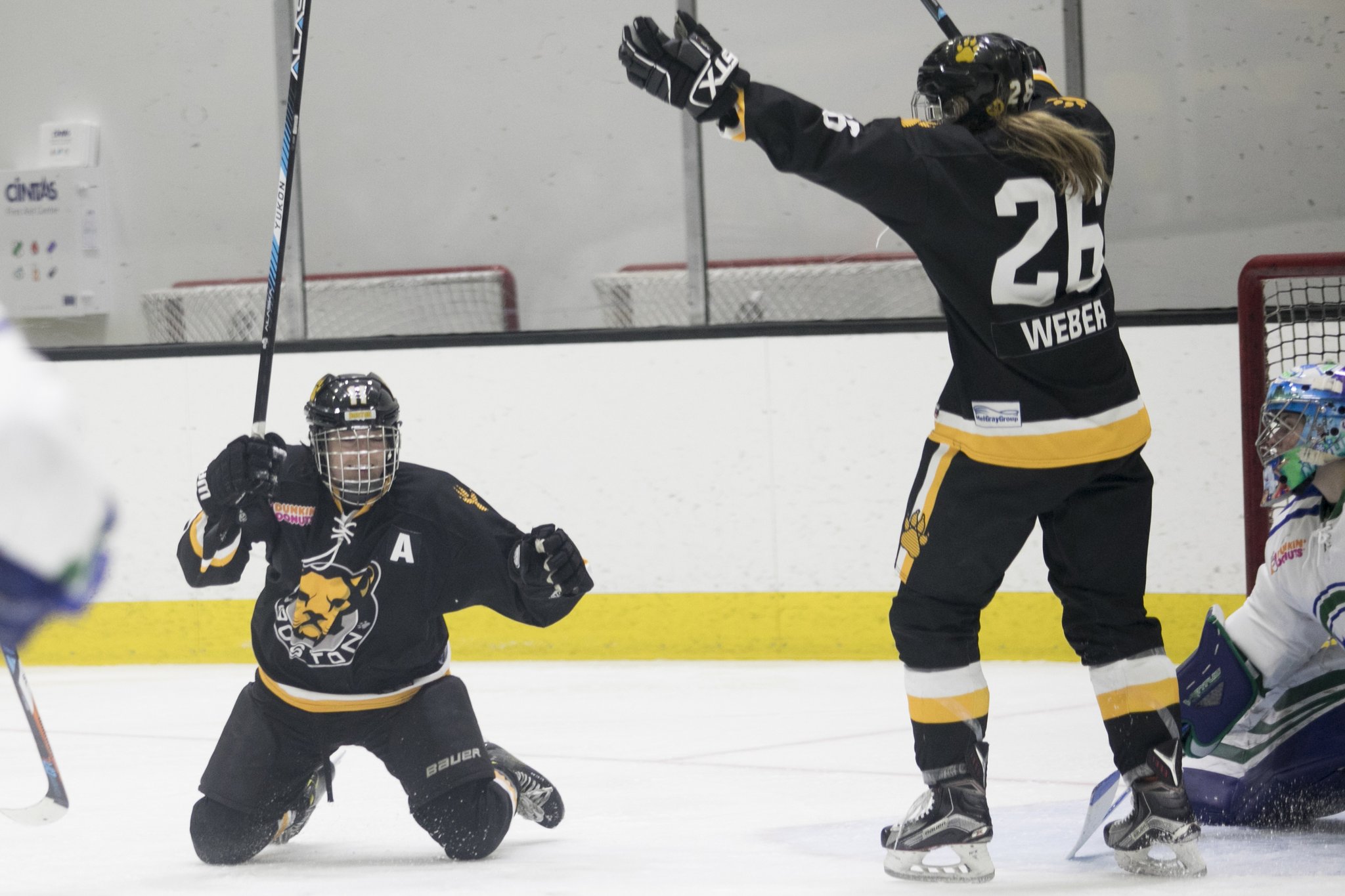 The penultimate week of regular season action in the NWHL saw the Buffalo Beauts extend their winning streak to nine, while the Boston Pride topped the Connecticut Whale.

Perhaps the biggest story out of this weekend is that Isobel Cup Playoff matchups are now officialy set. The Metropolitan Riveters have clinched first place in the league and will host the Connecticut Whale for a 7:00 PM faceoff on March 18.

The Beauts have clinched second place (the Riveters have the tiebreaker) and will host the Boston Pride in the first NWHL playoff game in Buffalo on March 17. Puck drop is set for 5:30 PM Eastern.

The Pride captured their second straight win over the Whale, this time by a score of 3-2, to clinch third place in the league.

Just 6:05 into the game, Boston went up 1-0. After taking the puck away from Whale player Amanda Boulier, Dana Trivigno passed it up to Jordan Smelker, who backhanded it in for the goal.

The Pride held onto their one-goal lead until they increased it near the end of the first. Mary Parker made a pass up to captain Jillian Dempsey, who potted her seventh goal of the season.

Connecticut got on the board early in the middle frame. After a shot was blocked in front of the net, Emily Fluke picked up the puck and made it a 2-1 game.

Less than two minutes later, however, Boston regained their two-goal lead. Janine Weber won a battle for the puck before Dana Trivigno made the pass to Smelker, who scored her second of the game.

The Whale got one back late in the third period on an elevated shot by Cydney Roesler. The Pride were able to hang on for the win, despite several Connecticut chances, including an essentially 2-on-0 opportunity for Kelly Babstock with 41 seconds remaining.

The Riveters lost just their third game of the season this past weekend, with all three losses coming to the Beauts. Buffalo won 2-1 in the Twitter Game of the Week.

Beauts captain Corinne Buie got her team on the board just over six minutes into the game. Sarah Casorso took a shot from the point that deflected off of Buie and into the net.

Buffalo appeared to take a 2-0 lead on a goal by Colleen Murphy, but it was called back on goaltender interference:

It looked like @cmurphsmurph10 scored a BEAUTy of a goal, but it gets called back…

Kristin Lewicki increased Buffalo's lead just 1:39 into the second period, as she took advantage of a rebound in front of the Riveter's crease.

Just over ten minutes later, Madison Packer got Metro on the board as she deflected a pass in front of the net.

Jenny Ryan led all skaters with nine shots on goal, accounting for a quarter of the Riveters' shots in the game.

Amanda Leveille made 35 saves in the win, while Katie Fitzgerald stopped 23 of 25 shots faced.

The NWHL will complete its regular season this Saturday, with all four teams in action.

The Beauts visit the Whale for a 7:00PM Eastern puck drop, while the Riveters and Pride face off a half-hour later.

The Buffalo vs. Connecticut game will be the Twitter Game of the Week.