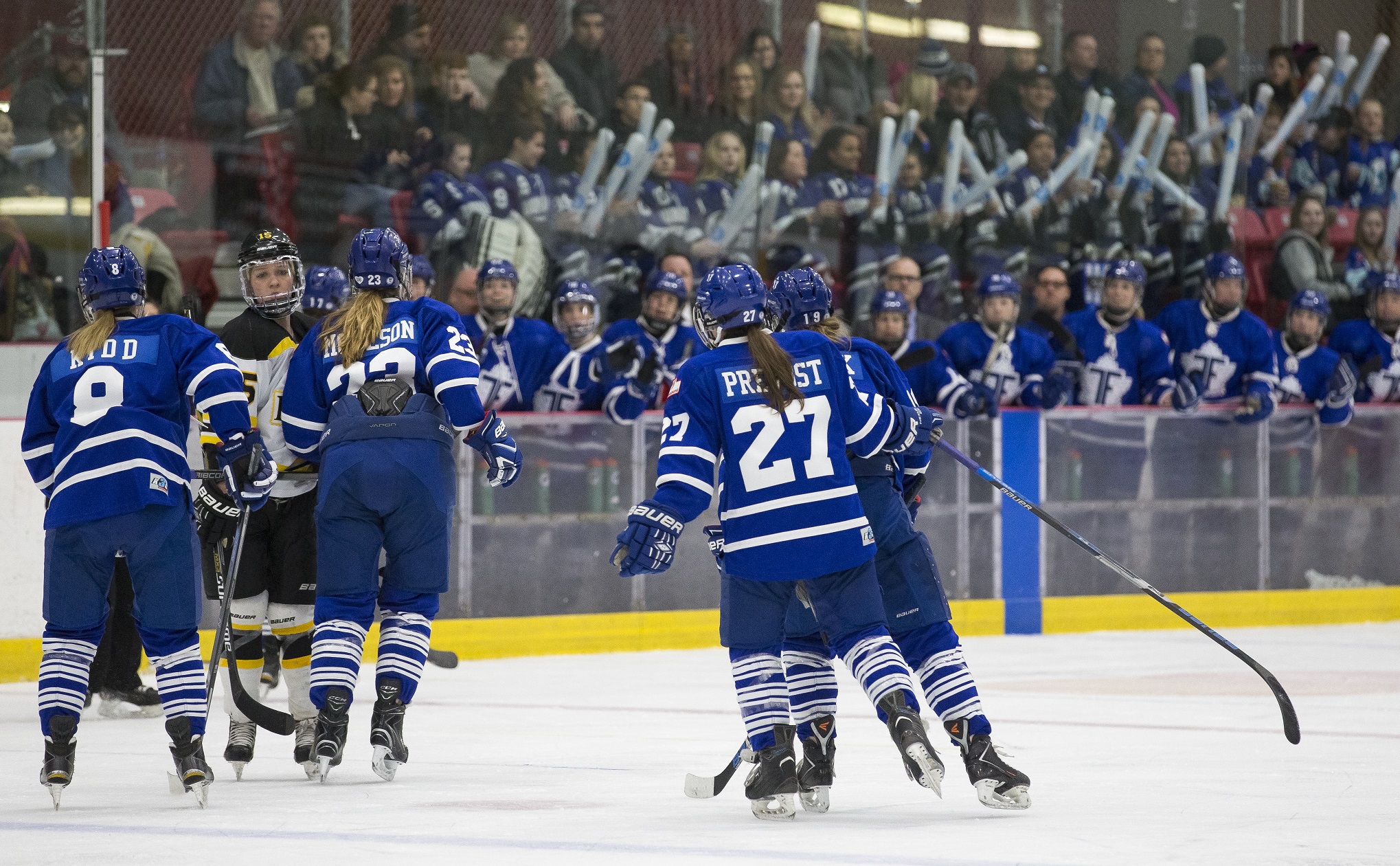 This week marked the return of a handful of Canadian Olympians to the league, as well as the end of Toronto's season. Kunlun shut out Les Canadiennes 3-0 in the last game of Montreal's China trip; the Furies defeated Boston; Markham swept Calgary with ease; and the Red Star toppled Vanke.

Kunlun surpassed Les Canadiennes for the top spot -- both teams have 41 points, but the Red Star claimed the season series. Calgary sits third and still has a chance to move into first or second. Markham is in fourth and needs just one point to clinch the final playoff berth over Vanke.

After taking Wednesday's meeting between the pair in a shootout, Kunlun shut out Montreal 3-0 to claim the season series 4-1.

Stephanie Anderson opened the scoring at 9:32 of the first period, and Kelli Stack doubled the lead exactly two minutes later.

Rachel Llanes tallied a power-play marker at 15:28 of the second to round out the scoreline.

The Red Star was 1-for-2 on the power play and perfect on four penalty kills. Noora Räty made 17 shots for the clean sheet, while Emerance Maschmeyer stopped 16 of 19 before being pulled for the extra attacker.

Calgary entered the weekend battling for home-ice advantage in the postseason, while the Thunder were fighting for the fourth and final playoff spot.

Both teams welcomed back Olympians, with captain Jocelyne Larocque lining up for Markham and forwards Brianne Jenner and Blayre Turnbull playing for the Inferno.

Jenna McParland opened the scoring for the Thunder just past the midway point of the first period, and teammate Kristen Richards made it 2-0 with 14 seconds left in the frame.

Katelyn Gosling brought Calgary within one with the only goal of the second period, a power-play tally at 13:48.

Larocque restored the two-goal lead just under five minutes into the third period when she skated into the zone while calling for the puck and picked the top corner from the slot -- a remarkably stylish goal from a defender who had just six to her name in 91 previous games.

Jamie Lee Rattray made it 4-1 at 17:10, and Megan Bozek slotted in an empty-netter with nine seconds left to seal the game.

Erica Howe turned away 29 of 30 shots for the Thunder, while Lindsey Post allowed four goals on 28 chances for Calgary.

The teams were goalless through the first period of Sunday's game before Bozek tallied a power-play marker 51 seconds into the middle frame. Laura McIntosh then doubled the advantage at 17:39.

Nicole Brown scored 2:59 into the third and Bozek added a 5-on-3 goal just before the halfway mark to make it 4-0, before Sophie Shirley broke the shut-out bid with 1:41 remaining.

Liz Knox made 23 saves on 24 shots for the Thunder, while Delayne Brian allowed four goals on 25 shots in the Calgary goal.

The Furies shut out Boston by a combined score of 7-0 to wrap up their season this weekend in the battle of the bottom two teams.

Brittany Zuback got things started with a goal just 55 seconds into Saturday's contest, and Sydney Kidd made it 2-0 just 2:16 after that.

Zuback got another chance with a penalty shot at 17:35 of the second, but Lauren Dahm turned it away to preserve the two-goal margin.

Carolyne Prevost then rounded out the scoring with an empty-netter to make it 3-0 with 40 seconds left.

Toronto was perfect on three penalty kills, while the Blades didn't give up any power-play opportunities.

Amanda Makela made 30 saves to earn the shut-out, while Dahm saved 23 of 25 pucks in defeat.

Emily Fulton opened Sunday's scoring with a power-play marker at 11:03 of the first period, and Kidd doubled the advantage with the lone goal of the second, at 15:12.

Jenna Dingeldein scored a 5-on-4 goal just before the halfway mark of the third, and Zuback buried an empty-netter with 1:39 remaining to close the Furies' season with a 4-0 win.

Kunlun outshot the Rays 27-15 and outscored them 5-1 in the final Shenzhen home game of the season.

Shiann Darkangelo opened the scoring at 4:50 of the first period. Cayley Mercer tied things up unassisted at 14:27, but Anderson added a power-play marker 3:18 later to put the Red Star up 2-1.

Zhu Rui followed it up by netting her first CWHL goal at 5:49 of the third, and Llanes made it 5-1 with just a second left in the game.

Kunlun was 1-for-3 on the power play and killed off all four penalties taken.

Räty allowed one goal for the Red Star and played the first part of the game before being swapped out for Wang Yuqing, who did not allow any goals to close it out; the tandem made a combined 14 saves but individual stats were not properly recorded. Elaine Chuli allowed five goals on 27 shots.

The teams will play their final regular season matches against one another in Boston next weekend to facilitate travel for the semifinals, which will be hosted in two of Calgary, Montreal, and the Greater Toronto Area.