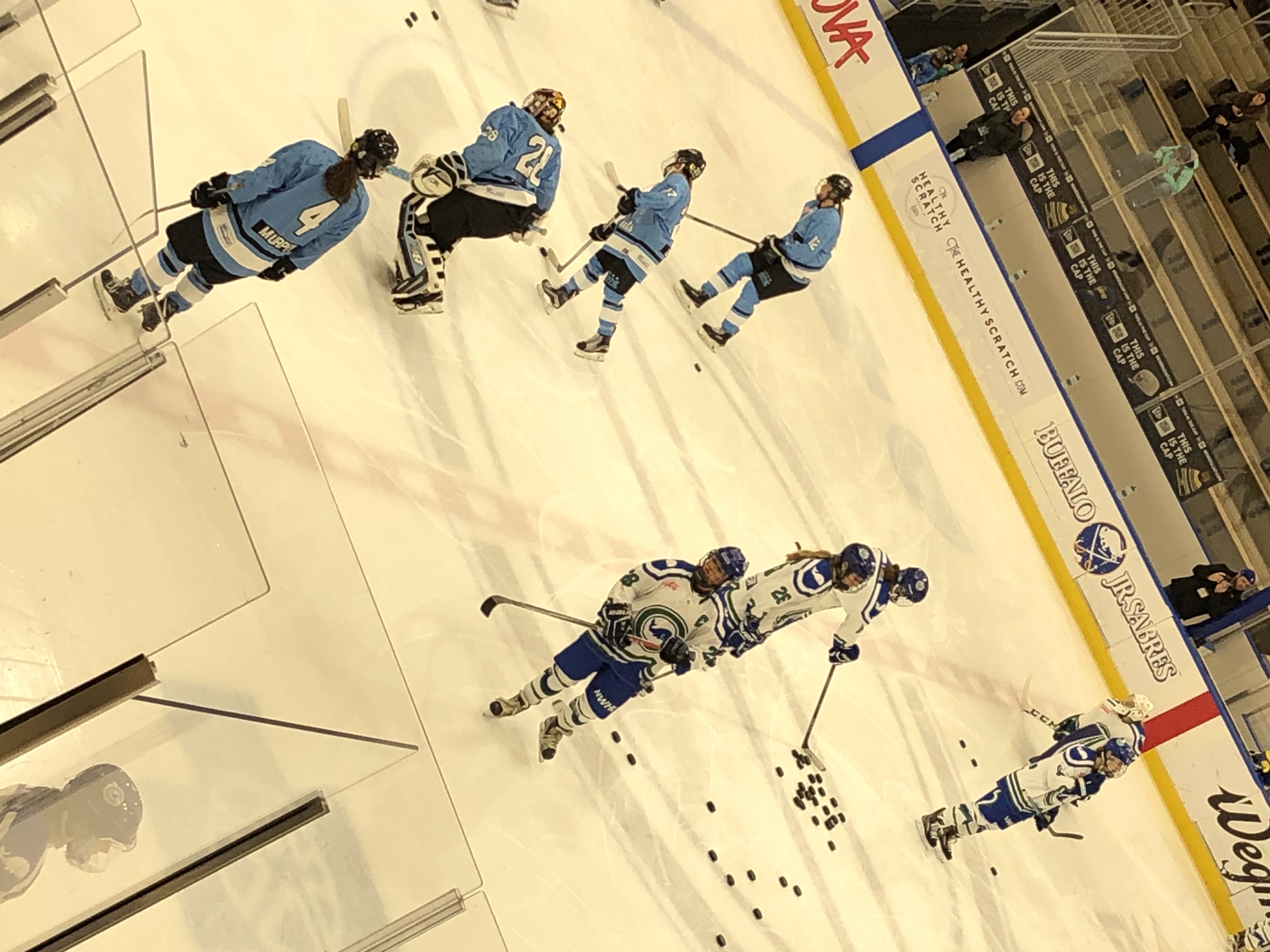 With a narrow win over the Connecticut Whale on Saturday, the Buffalo Beauts regained second place in the NWHL. Buffalo topped Connecticut 3-1 in the teams' final game of the 2017 calendar year.

Elsewhere, the Metropolitan Riveters maintained their perfect season, extending their record to 7-0-0 with a win over the Boston Pride Saturday evening. Metropolitan remains atop the league standings, while Boston is third. Connecticut now sits at the bottom of the league.

The Beauts and Whale met for the first time since week one of the season, this time for a matchup back in Buffalo as the Twitter Game of the Week.

Both teams seemed tentative in the first period, with the Whale playing a slightly more physical game as things settled in. After twenty minutes of play, the game remained scoreless.

The Beauts got on the board first nearly nine minutes into the second period, on Jess Jones' second goal of the season. She's now on a two-game scoring streak, and also tallied five shots on goal in Saturday's win.

Just 46 seconds later, Kristin Lewicki made it a two-goal lead with her second goal of the season. Like Jones, she too is on a two-game scoring streak.

A few quick goals put the Beauts in a good position heading into the third period, a place they've struggled often this season. Their efforts began to fall apart slightly when Amanda Boulier scored her first NWHL goal for Connecticut less than four minutes in.

Overall, Buffalo was able to put up a solid effort in the final twenty, holding Connecticut to just the one goal.

The tides turned further in the Beauts' favor when the Whale were charged with too many players on the ice and handed a penalty with 1:10 to play. Connecticut pulled their goaltender to equalize the playing field, but Hayley Scamurra notched a power-play empty-netter on her second chance at it. That goal regained the two-goal lead, and a short time later, the Beauts skated off with two points.

Emily Fluke was one of Connecticut's top players on the night, with one assist and seven shots on goal. She also finished the night a plus-1. For the Beauts, Sarah Edney notched two assists.

Amanda Leveille had 37 saves, while Sydney Rossman stopped 26 of 28 shots faced in the loss.

The Beauts were without several players in Saturday's game, including the team's leading scorer, Taylor Accursi. When asked about her -- and others' - absence, co-head coach Ric Seiling said:

"We have an abundance of players, there's no such thing as practice players anymore. We told all the players, you'll play based on your performance, and we’re gonna try and get everybody in the game and to play and give everyone an opportunity. When it comes down to crunch time, playoff time, we have to know who can do what."

Another night, another win for the Riveters. What more is there to say?

The Riveters came out with a bang, with Miye D'Oench putting her team on the board just 3:47 in. Jenny Ryan added a power-play goal later in the opening period to give Metropolitan a 2-0 lead after twenty minutes.

The Riveters added to their lead with a goal from Alexa Gruschow midway through the second period, but Boston came back with one of their own under a minute later. Janine Weber scored for the Pride to make it 3-1.

As the third period opened, the Riveters once again came out strong early. Harrison Browne scored a power-play goal 3:50 in to make it a 4-1 game, a tally that was initially credited to Erika Lawler.

Meagan Mangene closed the gap slightly with under four to play, but the Riveters held on for the 4-2 win, maintaining their undefeated record on the season.

Courtney Burke led the Riveters with six shots on goal, good for 1/6th of their total shots in the game. Gruschow notched a goal and assist, while Bray Ketchum posted two assists.

The NWHL now enters its holiday break and has completed its action for the calendar year.

The Beauts return to action on Saturday, January 6 to host the Boston Pride at 1:30 PM Eastern, while the Riveters host the Whale on Sunday, January 7 for a 3:00 PM puck drop.