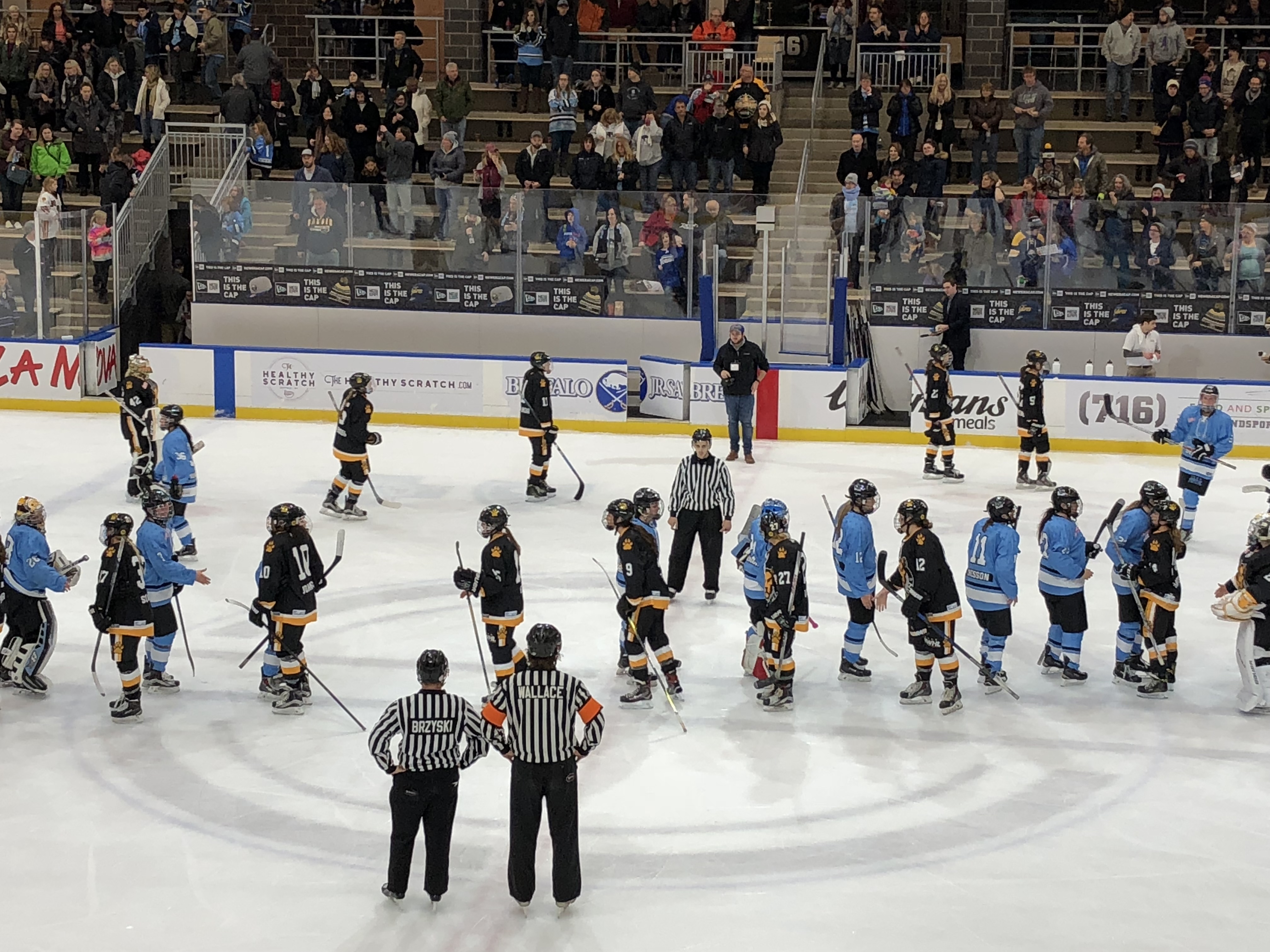 Six games into the NWHL season, the Metropolitan Riveters continue to hold first-place in the league, with a seven-point lead over the Boston Pride. The Riveters remain undefeated, while the Boston Pride have been started a streak of their own, with two consecutive wins.

With a loss to the Riveters this weekend, the Buffalo Beauts dropped to third place in the league, with four points on the season. The Connecticut Whale also have four points, but are in last place since they've scored fewer goals than the Pride.

This weekend, the Pride captured a 5-1 win over the Whale, while the Riveters rallied late to beat the Beauts 4-2.

After struggling early this season, the Boston Pride seem to be finding their feet. They secured their second consecutive win with the victory over the Whale on Sunday afternoon.

"Obviously a very frustrating start to the season for us, so we're excited things are starting to click," said Pride captain Jillian Dempsey after the game.

The Pride came out roaring in the first period, as Emily Field gave her team a 1-0 lead less than seven minutes in. Dempsey scored her first of the afternoon less than five minutes later to make it 2-0.

Their scoring streak continued with another goal by Dempsey in the second period. It became 4-0 when former Whale Dana Trivigno scored for the Pride early in the third.

The Whale got one back a short time later from Kelly Babstock, but they were unable to overcame the resulting three-goal deficit.

Trivigno added her second of the game just over halfway through the third to seal the win for the Pride.

"Plays like penalty kills and blocked shots really give us a lot of energy," Dempsey said.

Trivigno led both teams with an outstanding 10 shots on goal, accounting for more than a third of the Pride's shots during the game. Field had a goal and three assists, while Dempsey also had a four-point game with two goals and two assists.

Brittany Ott had 18 saves for the Pride. Sydney Rossman played 43:53 for the Whale, during which time she stopped 18 of 22 shots faced. Laura Brennan allowed one goal on six shots against in 16:07.

Heading into Sunday’s game, the Beauts knew they had a big task at hand, facing an undefeated Riveters team.

It started off well for Buffalo, as Jess Jones scored her first NWHL goal to put the Beauts up under two minutes in.

The Beauts regained the lead in the second period, as Kristin Lewicki made it 2-1, and for a while, it seemed like Buffalo might just pull off the win.

Until things fell apart in the third period, that is. The Riveters would score three goals in a span of 3:59, including a pair in 1:04.

Those goals -- including two on the power play by Kelly Nash and Miye D'Oench -- would be just hat the Riveters needed to secure yet another victory.

Metropolitan outshot Buffalo by a 40-15 margin, and went 2-for-3 on the power play. Buffalo failed to take advantage of four power play opportunities.

The Beauts were missing several players, including Hayley Scamurra, Jessica Sibley, Lisa Chesson, and Kayla Parsons. Meanwhile, the Riveters were missing captain Ashley Johnston, who has now been out of the lineup with a foot injury for two games.

Amanda Leveille had 36 saves in the loss for Buffalo, while Katie Fitzgerald had 13 saves for the Riveters. Former Beauts netminder Kimberly Sass was the backup for Fitzgerald.

The NWHL returns to action on Saturday, December 16 for the last games before the holiday break: