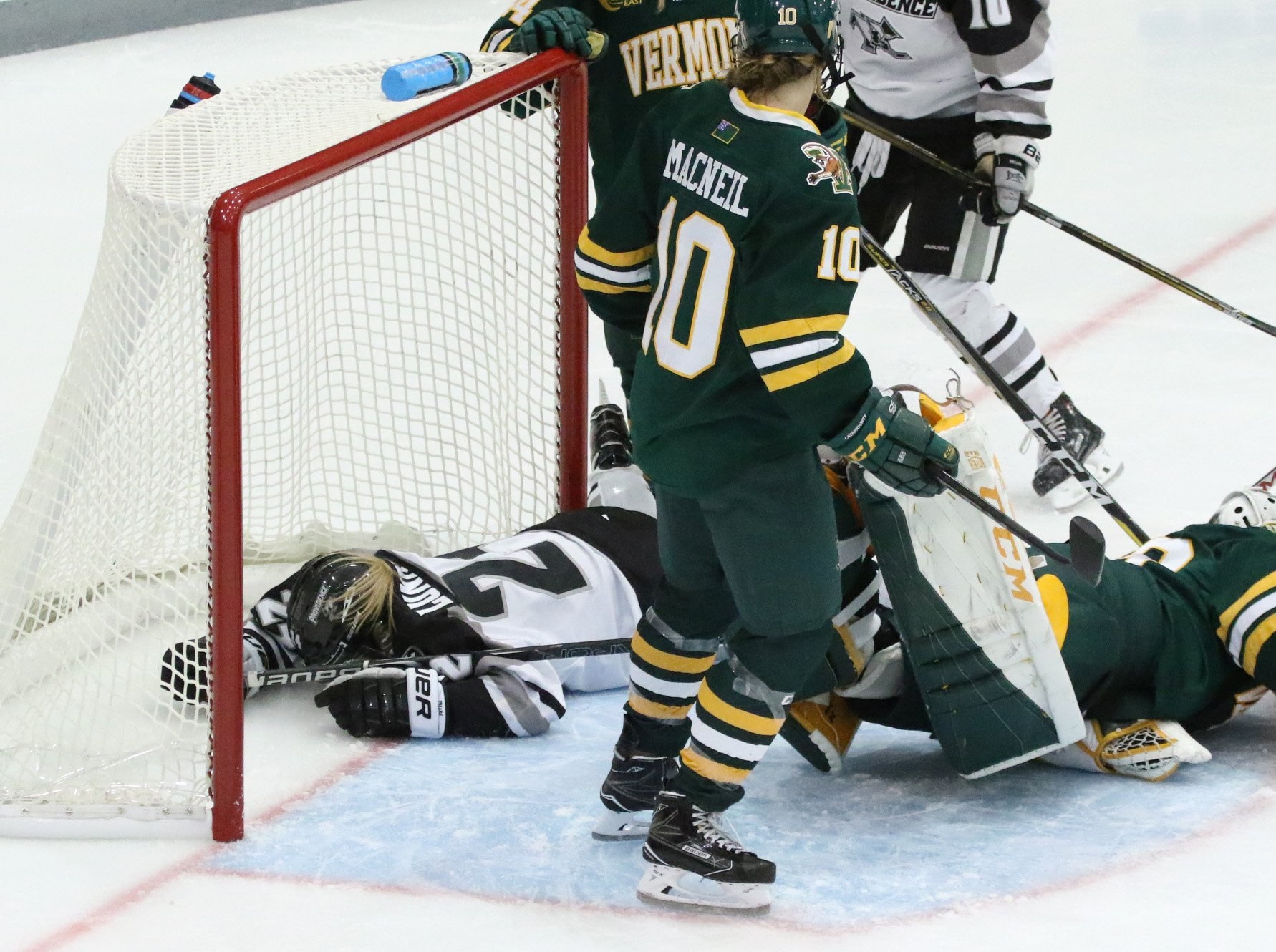 After a strong start, Robert Morris has lost two of their last four games. This will be the toughest test of their regular season, and should show how much growth the Colonials have done since their NCAA game against Wisconsin last season.

Colgate split with Cornell last weekend in a tough match of two top teams. Last season, the Raiders fell off a bit in the second half. They seem to be a much stronger squad this year, but only time will tell.

Both teams are strong offensively, so this might come down to goalies and special teams.

There's never a time that this isn't an interesting series. Much like with Bemidji last weekend, no matter the relative talent, these two are prepared for this rivalry and are determined to beat one another. Last year the Bulldogs got some of their first wins in Ridder and against Minnesota in years. This year, just two points separate them in the confernece standings.

The Bulldogs seemed overwhelmed at times in Madison against the Badgers last weekend, and Ridder should be as loud and rowdy. They need a great series from goalie Jessica Convery. The Badgers seemed to have her figured out early last weekend -- and you can bet that the Gophers have watched that film.

Minnesota has seen Alex Woken emerge as a big offensive threat as she works to find her confidence and footing after an ACL injury last season.

Providence has been a pleasant surprise in Hockey East. They sit just a single point behind Boston College atop the conference standings.

Boston University has made a bit of a comeback in the past few weeks pretty much solely on the shoulders of Victoria Bach, who's scoring at a rate that's better than many entire teams. She added four more goals Thursday night to an already impressive stretch in November. With her help, they've played themselves back into being a team to worry about in Hockey East. They need every conference point they can manage and have nothing but confidence.

The Friars have gotten a bit of a boost this season from the outstanding play of goalie Madison Myers.

This should be a heck of a game because BU is a bit in a place of "nothing to lose" that allows them to play loose and even a bit reckless in pursuit of their goals. Providence is in great territory, but at the moment would not make the NCAA tournament. Teams with something to prove always make for great games.

I'm in the holiday spirit for this final full weekend of play before the winter break. Stick taps only!

↑Boston University's Victoria Bach -- The senior continues to score at a better clip than most entire teams in the country. Her four goals Thursday night against Yale puts her at sixteen goals and seven assists over the past eight games. She was named Hockey East player of the Month for November, which is the first time that any Terrier has ever won the honor.

↑Youngsters -- The youth are moving in this year. Freshman Daryl Watts still leads the country in scoring, followed closely by sophomore Caitrin Lonergan. Those two lead Hockey East in conference scoring, while freshmen Tatum Skaggs and Naomi Rogge lead the WCHA in goals scored and sophomore Abby Roque leads in assists and points per game. In the ECAC, a freshman (Elizabeth Giguere) is leading in points and assists, while a sophomore (Michaela Pejzlova) is the top goal scorer. A sophomore (Kristen Campbell) leads the nation in goals against and save percentage

↑Wisconsin -- With a series sweep of UMD last weekend, top-ranked Wisconsin matched the best 20-game start in program history with a 19-1-0 record. The only other team in school history to open a season with a .950 winning percentage through 20 contests was the 2008-09 NCAA championship squad, which started out 18-0-2.

↑St. Cloud State's Emma Polusny -- The freshman goaltender set a program record for most saves in a shutout, with 41 stops against No. 5 Ohio State last weekend.

↑Penn State -- The Nittany Lions tallied a pair of wins over RIT last weekend to earn their first two conference victories of the year.

↑Wisconsin coach Mark Johnson -- The Badgers' coach is poised to pass Mercyhurst coach Michael Sisti as the second-winningest coach in DI history. Johnson has 447 wins to Sisti's 448. A Badger sweep and Mercyhurst split would give Johnson a share of the No. 2 spot. Should the season continue to play out as it has, there's a good chance that Johnson could become the all-time winningest coach this season. Harvard coach Katey Stone is the current record holder, with 458 wins and counting.