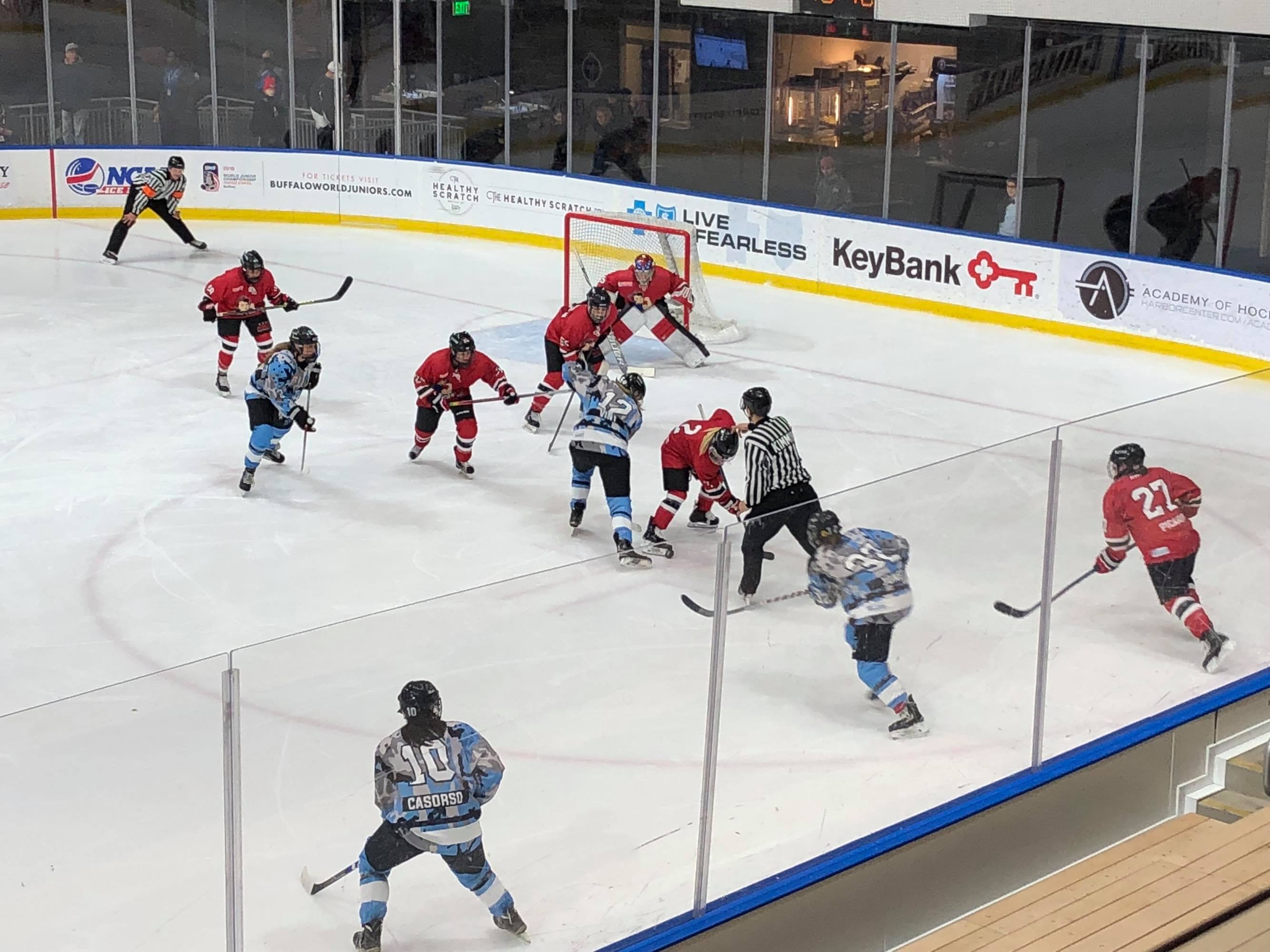 As the NWHL heads to its Thanksgiving break, the Metropolitan Riveters remain atop the league with a perfect 4-0-0 record. The Boston Pride are still searching for their first win of the season, while Buffalo and Connecticut each have two wins and two losses.

This past weekend, the Riveters battled for a full 60 minutes en route to a 6-3 win over the Beauts on Saturday. On Sunday, the Whale topped the Pride in the league’s first shootout of the season by a score of 4-3 in the Twitter Game of the Week.

Although the Pride are still winless, they did finally notch their first point of the season in the shootout loss. Another notable moment of the weekend: Alyssa Gagliardi’s first NWHL goal, in her third season in the league.

The Beauts were able to maintain pace with the Riveters through 40 minutes of play, but ultimately dropped off in the third period and fell to Metropolitan 6-3.

The teams exchanged goals in the first period, with Metropolitan's Bray Ketchum and Alexa Gruschow putting their team up 2-0 with less than seven minutes left in the period.

Buffalo rallied back with a pair, including Katherine Donohue’s first career NWHL goal on an open side of the net with Riveters netminder Katie Fitzgerald down. Longtime Beaut Kourtney Kunichika also scored to tie the game.

The second period was much of the same; Jenny Ryan put the Riveters up, but Metropolitan’s lead lasted only 18 seconds. Hayley Scamurra tied the game at three.

Buffalo’s effort fell apart in the third, when the Riveters managed to score three times, including another goal by Gruschow and one by Miye D'Oench. In the end, D’Oench accounted for 11 of her team’s 37 shots.

That trio of goals gave Metropolitan the lead it needed, and the Beauts were unable to stage a comeback. Katie Fitzgerald had 18 saves in the win, while Amanda Leveille stopped 31 of 37 shots faced for Buffalo.

Gruschow’s three-point campaign helped give the Riveters that extra push to maintain their unblemished record. She now leads the NWHL with nine points. For the Beauts, Maddie Elia had a pair of assists in the loss. She now has four assists on the season, good for third leaguewide.

"They've got a lot of forward speed," he said. "They keep coming at you, and the way you've got to battle is to keep them on their heels."

"We had a lot of scrambled opportunities we didn’t capitalize on," he added.

Seiling also noted that many players are unable to make team practices due to work schedules, which makes it tough for the team heading into games. Team captain Corinne Buie also reflected this in her postgame scrum.

"It’s been a trend that we definitely want to solve," she said.

The Whale were able to return to the win column, but it took 65 minutes of hockey plus a shootout to get there in their 4-3 victory over the Pride on Sunday.

Alyssa Gagliardi put Boston up 1-0 on the power play almost halfway through the opening frame with her first career NWHL goal. The defender has been with the Pride since the league’s beginning; she had registered 56 shots in 37 regular season games up until Sunday's goal.

Connecticut came back with a goal in the second, as Emily Fluke notched her first point of the night, deflecting a shot from the blue line into the net behind Brittany Ott. She'd add an assist later in the game for four points in as many NWHL games.

The third period would see both teams score twice, starting with the Pride. Haley Skarupa put her team up 2-1 against her former team on a rebound before Emily Field made it a two-goal game during a scrum in front of the net.

With just two and a half minutes remaining in regulation and the game on the line, Kelly Babstock did what she does best: score. That cut the Pride's lead to one, and Sam Faber then tied the game with just 59 seconds left.

Just like that, it was a brand new game. Following a fruitless overtime, the teams headed to a shootout. Kelly Babstock scored the lone goal in the shootout, following up a three-point night with the game-deciding move to give Connecticut the win.

"Once again," he said, "we put ourselves in a tough spot, taking so many penalties."

The Pride were ultimately unable to capitalize on the power play throughout the game, going 1-for-6. Had they been able to take advantage of those opportunities, the end result might have been quite different. Still, the Whale went 0-for-3 on the power play.

Whale rookie Amanda Boulier had a strong performance in Sunday's win, notching her first two NWHL points, both assists. The defender finished the game a plus-2 and had six blocked shots.

"We were down with under ten minutes to go," she said, "and there wasn't one person on that bench who felt like we were out of it."

That ties her for second in the league through four games; Connecticut's Elena Orlando leads all NWHL players with 14 blocked shots on the season, while Buffalo's Buie ties Boulier with six.

The NWHL now takes a week off, with no games immediately following the American Thanksgiving holiday.

League action returns on Saturday, December 2 with the Beauts visiting the Pride for a 7:30 PM Eastern puck drop.

The Whale and Riveters will meet the following day, Sunday, December 3 for a 3:00 PM Eastern puck drop.