Sidney Peters is living a lot of young goalies' dreams. She's the starting goalie for the University of Minnesota women's hockey team, and she's about to play in the Frozen Four with a chance at another national championship.

But it's been a long road to happiness and success. Beyond the regular struggles, both mental and physical, Peters has had difficulty adjusting to life in college -- not just because of the elevated level of play, but because she found herself in an unfamiliar role as a backup.

Peters said that being recruited by the Gophers was a dream come true. When she arrived on campus for her freshman year, it was from a hockey academy where she'd excelled. But the bubble burst for her pretty quickly when she found out she would be red-shirting her first year. Used to being the best of the best, she came to Minneapolis to find that she was surrounded by players who'd also been the best.

"I came into my freshman year after a great year of hockey my senior year (in high school). I was feeling very confident as a high school goalie. I'd had a lot of success on the ice in high school and then I got to college and everyone at Minnesota is very skilled and very motivated and they work super hard. I was coming in to a program where excellence was expected of us every day. And it wasn't just excellence at the high school level any more, it was excellence at the collegiate level," said Peters.

As a player who'd attended a hockey academy and worked toward a Division I scholarship, hockey was Peters' life. It was how she described herself to strangers. It was how she defined herself. So when she learned she'd be red-shirting, she didn't quite know how to handle it. She felt like her identity had been stripped away and that she was left searching for answers as to who she might be outside of the rink.

Freshman year of college is such a volatile and transformative time in a young adult's life in any case, and now Peters was having what amounted to an existential crisis. It took a lot of stepping outside herself, reevaluating, and and coming to terms with a new reality.

Looking back on it, Peters feels like she's grown exponentially from the experience. She found hobbies and interests outside of hockey and she feels like that has only made her a better hockey player and teammate. It also made her a better person. She's now more well-rounded. By opening herself up to find other interests, she's found more love for the game. It's never a chore, but always a privilege.

The hockey season is long. From September through March, the players eat, sleep, and breathe hockey. One of the best things that she got from that freshman year gut check was an understanding of how important time away from the rink was. In order to work through the grind of the season, Peters makes sure to take time off in the summer to recharge and refresh away from the rink or anything involving hockey. She still works on fitness, but she keeps a bit of time in the summer away from hockey and that helps her to be more committed and more in the moment during the season.

She's found that refreshing process helps her when the season gets long and there's a temptation to want to slack off or take a day off. As a goalie, she just doesn't have that option.

"You're involved in every play. If I show up one day not ready to work and I don't want to be there, that attitude is going to rub off on my teammates and it's going to affect everyone and there's no room for that. We have no patience for that here and I expect more than that from myself," she said.

Finding her identity and coming into her own were just the first hurdle for Peters. She spent the next two seasons as the backup to Amanda Leveille. While red-shirting was difficult, it was just a preview of the challenges that would be in store for Peters in her next two seasons.

Being a backup is exhausting. It's putting in as much work as every starter to be ready to play in a game that you'll probably never see ice time in. It's the same physical and mental preparation and then the emotional strength needed to be supportive and positive on the bench. It's needing to be in every single moment because you never know when the team will need you. That constant up and down -- the uncertainty -- is draining. But Peters said that having a routine helps. She prepares the same way now that she did back then. It helps her feel comfortable and confident and to find the flow and rhythm of the game.

Spending that time as a backup has helped Peters in innumerable ways. She said it made her hungrier, for one. It also made her all the more grateful for the opportunities she does have.

As a goalie, during a game, your whole world is in that oval and enclosed by those dasher boards. Peters said the most important thing she's learned about hockey was advice from her dad, who taught her that any time she starts playing for someone outside the boards, it's time to step away. That could mean playing to impress friends or family, or scouts, or playing to make someone else proud -- it doesn't matter. Peters really believes in the idea that she has to play for herself -- and her teammates -- in order for them to be successful.

"When you're young, you play hockey because you love it. But as you get older, there are other things that can get in the way. Those distractions while you're on the ice can really hurt your play. When you're on the ice, it's important to keep your head between the boards," she said.

That life-lesson actually fits in perfectly with the philosophy of the Gophers' program. It's a team-first (and teammate-first) approach that emphasizes playing for each other and sticking together. 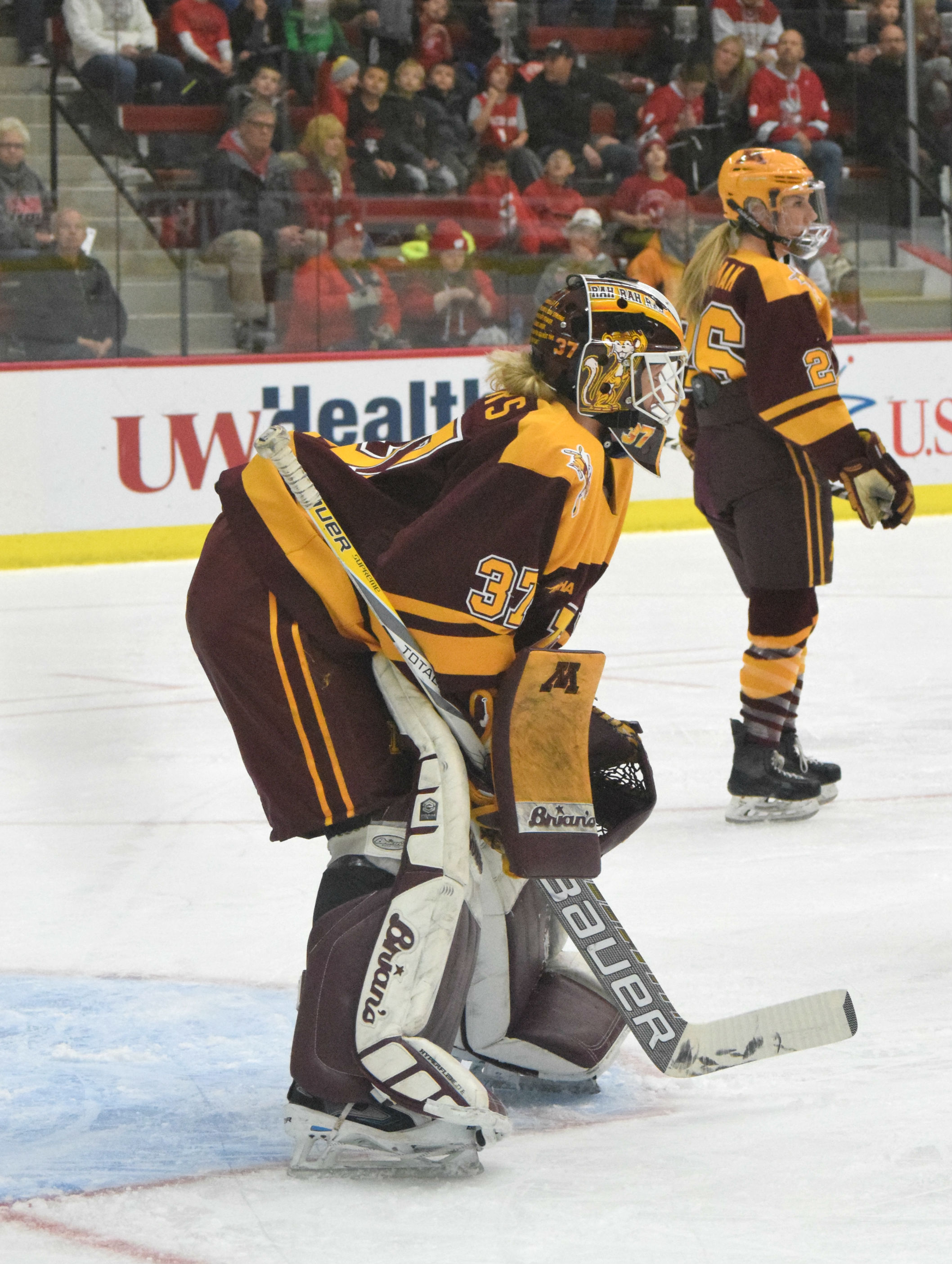 As Minnesota has faced injuries and what, for them, was a down season, Gophers' head coach Brad Frost said that the student-athletes were able to lean on each other to dig in and weather the tougher times. The lessons that Peters learned as a backup -- including hard work, discipline, and motivation -- all have helped her be a better teammate during this season. She knows frustration and she's able to commiserate with the other players who might not see as much playing time. Her compassion and ability to empathize are intangible qualities that have helped her become an invaluable part of the team.

Now as the starter, Peters is finding there are new mental challenges to face. But those challenges that she's overcome in the past have left her well prepared to handle them now.

"Goaltending is hard. You're an island, whether you want to be or not. You can't hide. A lot of time you get more credit than you deserve, but you also get more criticism than you deserve. Everyone is going to critique you every game. You're never going to get a chance to fly under the radar. It's not just difficult physically, it's difficult mentally. You have the whole team riding on your back. It feels super good when you're playing great, but there's a lot of valleys. Nobody plays great all the time. You're accountable to an entire team. That's a tough pill to swallow," she said.

Peters relies on the mental fortitude and focus that she developed in her first few years as a Gopher during every stoppage in play. It's incredibly tempting to look around the arena, to find friends or check out the bench or see what's happening on the big screen, and that can easily pull a goalie out of focus. As a result, Peters has developed a trick that helps her tune all of that out and hone in on what she needs to think about -- the next shot, the next play, the next period.

"It's kind of a dangerous part of the game. There's a lot of temptation to get distracted," she said. "One trick I have that keeps me in the game is I take my water bottle and I squirt it up in the air and I try to pick one droplet and watch it fall down to the ice. For me it's a way to have a focal point -- something that's going to calm me down and make me feel centered, but it's also a way to keep my eyes warm when I haven't seen a shot in awhile. It's just a routine. Routines help you have confidence and feel prepared, so it's something that I do to just feel comfortable and like I'm controlling what I can control."

Whatever happens for Peters and the Gophers at this weekend's Frozen Four, the season should already be dubbed a success. Coach Frost said he's not entirely sure what happened, or when exactly, but he noticed a change in Peters in the second half. He assumes confidence is at least part of the answer, but he also thinks it's more about trust. Not only did Peters start to trust herself, but she began to believe that her teammates trusted her as well.

Following behind a line of goalkeepers that are now playing at the professional and international level may have been intimidating, but Peters has the record to prove she belongs in that net -- regardless of the path that brought her there.

A lot of players might have quit early on in the path that's been Peters' collegiate career. Most people certainly wouldn't have put in the time and effort that she did over her ensuing two years as a backup, but Peters said she promised herself that she'd see it through. The same character traits that wouldn't her to live with herself if she quit are the same ones that have helped her persevere -- and succeed.

"I have to believe it's been worth it because I've put a lot of work into it. I came into the program and my expectations for my experience were very different from what ended up happening. And I had to go through three years of not playing and just hiding in the background working on myself every day. It's not an easy thing to do. It's not an easy thing to be a student-athlete and it's not an easy thing to do to be a student-athlete that feels isolated sometimes as a backup goalie. When you're not getting that attention it's easy to be frustrated to ask 'is it worth it,' but it definitely is. There's no better feeling than getting to step on the ice with my teammates and wear that gold jersey. It's something that most kids dream about," she said.

It's been a tough road, but Peters is pretty happy with where she ended up.

"It was hard. It certainly was an experience that made me a better person. I wouldn't trade the experience for anything. I wouldn't necessarily want to relive it -- it wasn't fun -- but I'm proud of who I am and a big part of that I would attribute to my experience as a backup goalie."

The Minnesota Golden Gophers will take on the Clarkson Golden Knights in the Frozen Four semifinal on March 17 at 9:00 PM Eastern in St. Charles, Missouri. The game will be broadcast, along with the first 6:00 PM Eastern semifinal game between BC and Wisconsin, on NCAA.com.