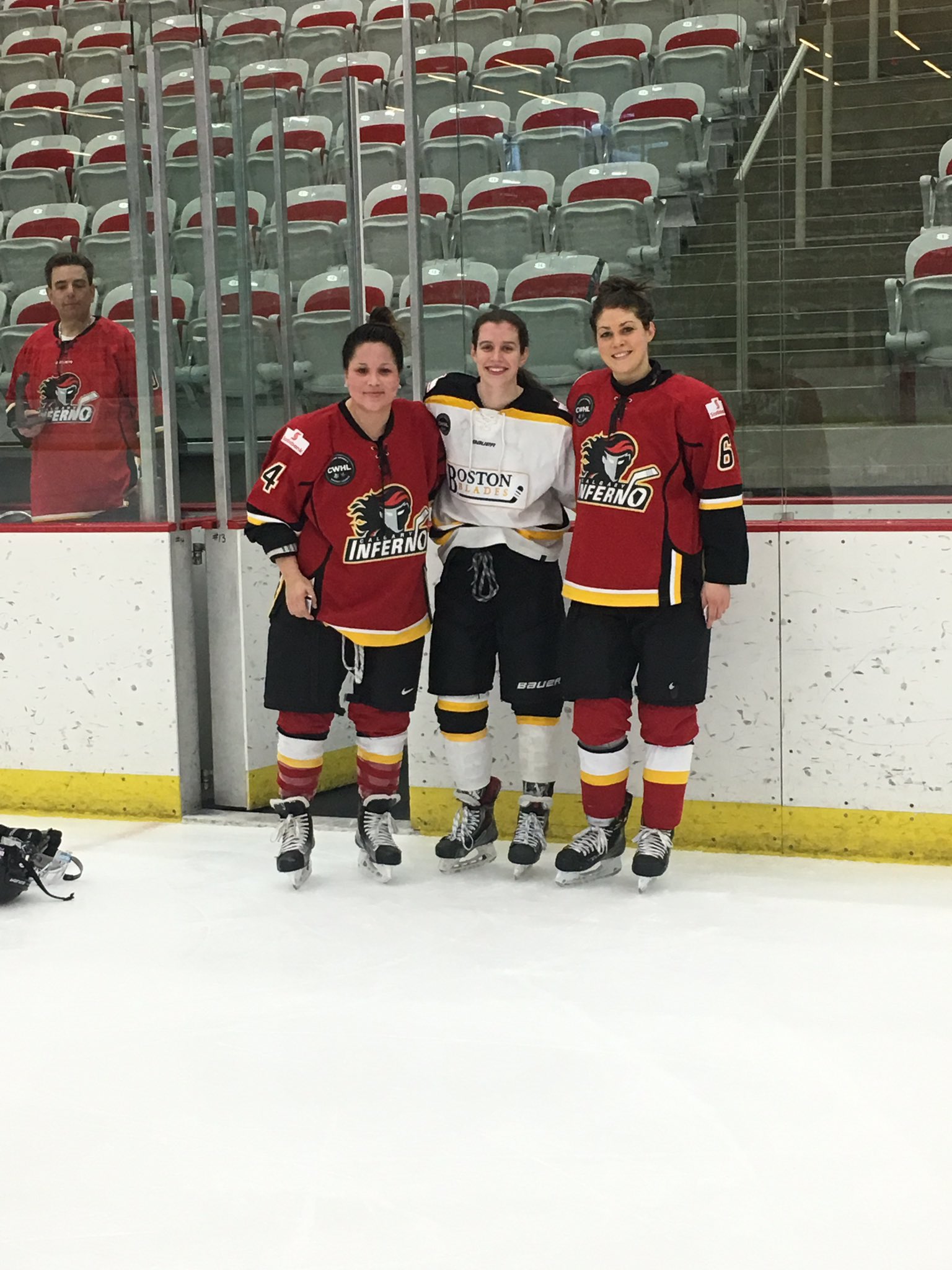 We're getting ever so close to the end of the season. The teams will take a break for the All-Star Weekend, which leaves just one weekend left of regular season play.

Les Canadiennes swept Toronto and Calgary swept Boston, leaving both the Inferno and Montreal locked in a tight battle for first place. This is fantastic, because the teams will close out the regular season with a series against each other. It could be another preview for the Clarkson Cup Final.

Calgary sits in first place with 38 points, while Les Canadiennes have 34. Brampton has now caught up to Toronto and the teams have 22 points each. The Furies have played their last game of the regular season, which gives Brampton a chance to leapfrog them into sole possession of third place

Calgary swept the Blades by a total of 13-2 over the weekend. The Inferno opened the series with a 9-2 win on Saturday. Calgary scored four goals in the opening frame of the series and added five goals in the second period, while Boston scored twice in the third.

"For the rest of the weekend, I thought we battled harder and did a good job of trying to contain them," Blades coach Brian McCloskey said. "Offensively, they're so explosive and we generated some great chances."

"We had a balanced attack, whether it was from our forward, our D, and then we had solid goaltending," Calgary coach Scott Reid said. "The combination of the three of them definitely helped us out."

Boston's defense and goaltending fared a little better the next night. Bailey Bram opened the scoring in the first, followed by tallies from Brianne Jenner and Saulnier in the second. Bridgett Lacquette added a goal in the third.

Rackleff got the start for Boston and made 43 saves, while Genevieve Lacasse stopped 14 shots for the shutout.

"Lauren has played great for us all season long, but she just didn't look as sharp on Saturday and so I went with Jetta," said Reid.

The matchup between both teams turned into a defensive battle, with Les Canadiennes squeaking by with a 2-0 win on Saturday and a 2-1 win on Sunday.

Marie-Philip Poulin scored the game's first goal on Saturday, potting an attempt midway through the first. Karell Emard scored an empty netter late in the third. Christina Kessler made 27 saves in the loss, while Charline Labonte stopped 18 for the shutout.

"[Our strength was] our consistency of playing a full 60-minute game not giving up, battling, doing the little things," said Toronto head coach Sommer West. "I think we played exceptionally well this weekend -- we just didn't bury the puck when we had the chance."

Ann-Sophie Bettez scored 2:21 into the game to give Les Canadiennes the lead. Kelly Terry tied it midway through the third to send it to overtime. But Poulin (who else) scored the game-winning goal. Labonte made 23 saves and Kessler made 22.

"We wanted to have an overtime win and not a shootout win in order to be able to still fight for first place, so the girls were able to get that done."

"We had some chances as well, we just couldn't get the puck past Genevieve Lacasse, who's an outstanding goalie. Of course, we know that, because we had her last year." -- Boston head coach Brian McCloskey

"You can never get complacent, whether its D zone or your forecheck, breakouts, neutral zone, any kind of system work. There's always tweaking or adjusting that you need to do." -- Calgary head coach Scott Reid

"The [players] had a little bit of their own little meeting along with some information from the coaches. ... We've seen a bit of a switchover from the [players] who went into Boston played really well, and I truly believe that this weekend was probably our best weekend of hockey to date. So [we're climbing that mountain and it's a good time to be doing that." -- Toronto head coach Sommer West

"[Her] attitude, she's all smiling, has energy and that's very good for [the] team atmosphere," Breton-Lebreux said. "Her speed, her vision, and combine that with dedication to training, that's what you get."

↑ Jetta Rackleff: She was forced into a tough situation when she had to relieve Dahm just 12:33 into the game. But Rackleff played well and made 34 saves. The next night she played well again, making 43 saves. It isn't easy being a Blades goaltender when you face around 40 shots per game, but Rackleff stepped up this weekend.

"Jetta was terrific...She got beat a bit in the second period; she gave up five goals which sounds terrible on paper, but they were really storming us," McCloskey said.

"Saturday, [in] the second period, she had some ups and downs, but I really liked the way she composed herself and competed and then in the third period she really did a great job. We didn't give a goal in the third. On Sunday I thought she had a strong, strong game...Jetta was just very calm in there, very composed, and she's very athletic as a goaltender so she made a couple of spectacular saves. In general, she was strong in net and gave us a lot of confidence."

"I think we got in on the forecheck quickly, made them cough pucks out, and then once we were able to do that we took the puck to the net with the net-front presence," Reid said. "It's hard to stop a puck you can't see. We didn't really outshoot them that much and we were able to score some goals, but I think it's because that net front was there when we were able to shoot the puck."

↓ Toronto's execution: The Furies' offense struggled and mustered just one goal against Les Canadiennes. "Putting away our chances," West said. "It's just going an extra little bit to bury that chance."

↓ Les Canadiennes offense: Piggybacking off my last point, Les Candiennes also had an uncharacteristically low-scoring effort this weekend with just four goals total. They also only scored one power play goal out of six attempts on Saturday.

"That finishing touch, we need to work on," Breton-Lebreux said.