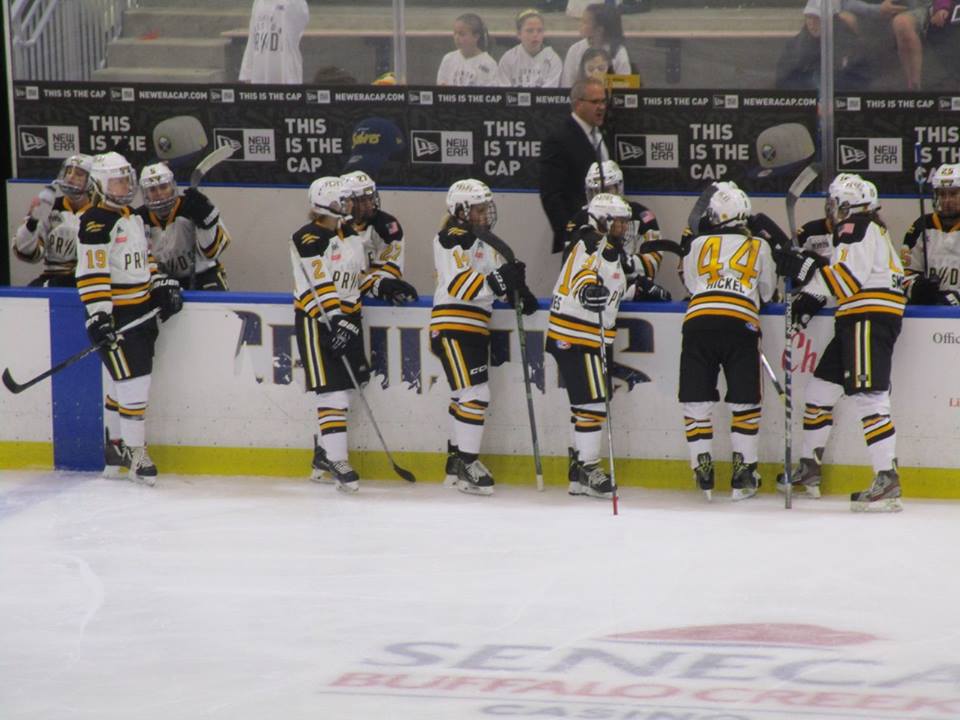 The National Women's Hockey League wrapped up its action prior to the league's upcoming All-Star Weekend with a narrow win by the New York Riveters, as well as continued dominance by the Boston Pride.

Although the Buffalo Beauts have historically come back from deficits many times in their existence, it turned out that a 3-0 NY Riveters lead on Saturday afternoon was just a little too much.

Both teams played a strong first ten minutes, with the Beauts killing off a 5-on-3 with both Harrison Browne and Emily Janiga in the penalty box. With almost six and a half to play in the opening frame, the Riveters took the lead on Janine Weber's team-leading seventh goal of the season, a bottle-popping goal from the hash marks as she showed off her speed. Amanda Kessel and Courtney Burke notched the assists as New York went up 1-0.

Less than five minutes later, the Riveters went up 2-0 on Alexa Gruschow's second of the year. Kessel played out a perfect pass to Gruschow, who buried it behind Beauts netminder Brianne McLaughlin. Kessel notched her second point of the night and 11th of the season, while Milica McMillen added an assist.

Leading 2-0 and up in shots 16-6, the Riveters took that momentum into the second period, going up 3-0 on Tatiana Rafter's fifth goal of the season. Rafter got credit for the goal after tipping in a shot from the point by Kiira Dosdall. Dosdall and Miye D'Oench were credited with the assists.

Katie Fitzgerald's shutout bid ended just 2:47 into the middle frame, when Shiann Darkangelo got Buffalo on the board with her fifth goal of the season on a pass from Emily Janiga. She's now tied with Kelley Steadman for second in goals on the Beauts. Janiga and Megan Bozek potted the assists.

The Beauts struck again quickly off the offensive-zone draw, with Corinne Buie making it a one-goal game just 31 seconds later on her team-leading eighth goal of the season. Kourtney Kunichika notched the lone assist.

Despite the quick rally, the Beauts were ultimately unable to finish the comeback, and the Riveters held on for a 3-2 victory. Brianne McLaughlin finished the game with 29 saves for Buffalo, while Fitzgerald had 22 saves for the Riveters.

If there's one word to describe the Boston Pride, it's simply: unstoppable. A 5-2 victory over the Connecticut Whale on Saturday night extended the Pride's perfect record this season to 12-0-0.

The Pride struck first, with Alex Carpenter making it 1-0 with 1:09 to play in the first period with her eighth goal of the season. Meghan Duggan notched the lone assist for her first, but certainly not last, point of the night.

It wasn't going to be an easy one for the Pride, however -- at least not initially. Just 54 seconds after Carpenter's tally, Haley Skarupa took advantage of a power play to tie the game at one. Kelli Stack and Dana Trivigno potted the assists.

The Whale went up on the Pride 2-1 late in the second period as Micaela Long scored her third of the year. Shannon Doyle and Nicole Kosta notched assists on the go-ahead goal.

Despite being down heading into the final frame, the Pride weren't giving up just yet. A strong, four-goal third period gave them a 5-2 victory and yet another win on their perfect record.

Kacey Bellamy scored her first goal of the season, tying the game at two just 2:41 into the third, and it was all Boston from there out. Duggan scored once to put her team up by a goal. Halfway through the period, Brianna Decker made it 4-2 on a power-play goal with her ninth of the season, and Duggan added another power-play goal with her third point of the night to make it 5-2.

Duggan and Skarupa are now tied for the league lead in goals, with 10 each. Decker has nine, while Carpenter and Buffalo's Corinne Buie have eight each. Carpenter leads the NWHL with 14 assists, with NY Riveters forward Rebecca Russo behind her with 10.

Brittany Ott had 20 saves in the win, while Shenae Lundberg stopped 33 of 38 shots in the loss.

The NWHL now heads toward its second All-Star Weekend, which will be held February 11 and 12 at the UPMC Lemieux Sports Complex in Cranberry, PA. Stay tuned for full coverage of the All-Star Weekend and other NWHL action.