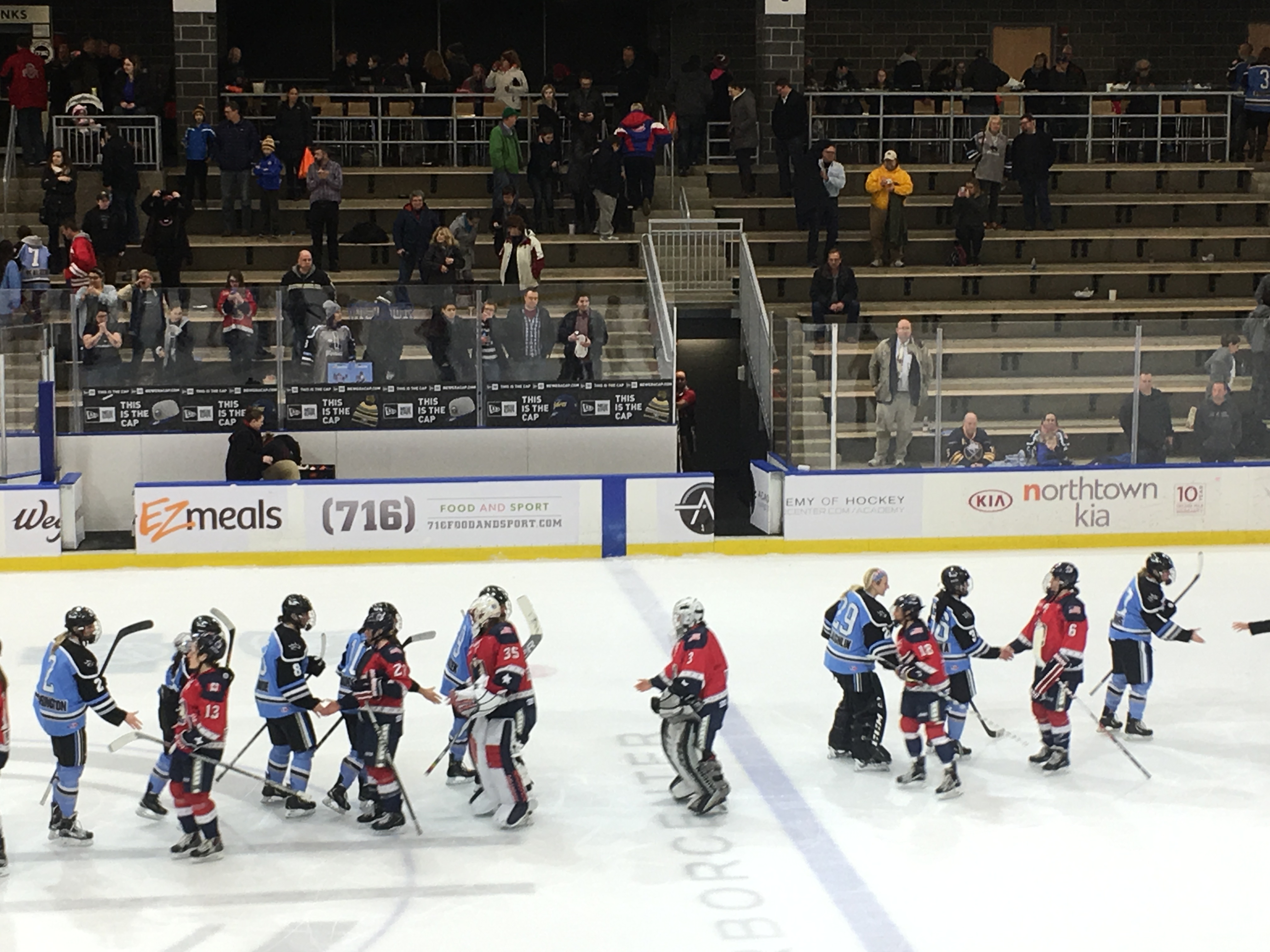 Late last week, the NWHL announced a number of changes to its current season format and briefly touched on the league's future.

First, the league announced a revised, shortened schedule for the remainder of the 2016-2017 season. Though it was originally slated to end on April 16, the regular season will now wrap up on March 5. With this revision, a total of eight regular season games have been cut from the schedule. According to the league, refunds or exchanges will be offered to fans who have already purchased tickets for the cancelled games.

The NY Riveters and Connecticut Whale will finish the season with 18 games played each, while the Boston Pride and Buffalo Beauts will finish with 17 games played each. To accommodate for this imbalance, playoff rankings will be determined by points-percentage, rather than just straight-up points.

The league also announced that this year's Isobel Cup playoffs and finals will be one-game elimination. The first-place and fourth-place teams will play on March 17, with the second- and third-place teams playing the following day. The winners of those games will face off for the Isobel Cup on March 19.

The location for these games has not been announced, but since they're all being played within a three-day stretch, it's possible they will all be held at one central location to simplify travel and organization.

Per the league's press release, the early completion of the season comes as a result of an agreement between the NWHL and player representatives, in order to end the season prior to national team players leaving for the 2017 IIHF Women's World Championship. The original schedule allowed for a three-week break around that time before teams came back together to finish the season.

“One of the primary missions of the NWHL is to help women realize Olympic dreams and national team aspirations, so concluding our season prior to the World Championships is the right thing to do,” said commissioner Dani Rylan in the league's press release.

Ending the season earlier will wrap things up nicely, rather than having an awkward, lengthy break.

In addition to the changes in this season's schedule, the league also announced its intention to continue play with the Founding Four teams next season and introduced the possibility of neutral-site games intended to "promote the league and gauge reaction to prospective expansion franchises."

Perhaps this is just what the upcoming NWHL All-Star Game in Pittsburgh is: an attempt to gauge fan and media attention for a potential expansion franchise.

According to Rylan, several prospective markets/ownership groups have expressed interest in an expansion franchise, but the league won't consider adding any new teams until the 2018-19 season at the earliest.

Although it may seem bold or risky to discuss expansion at a time when the league often appears to be having trouble staying afloat, it makes perfect sense for Rylan to at least address the topic. After all, it's been a subject of discussion since the league's first season, and putting it out there that several markets have shown an interest may even help the league appear stronger.

“We’re grateful for their enthusiasm for the NWHL and professional women’s hockey. Women's hockey is one of the fastest growing sports in North America," she said in the league's release. "It's only a matter of time before we'll have to expand to accommodate both the talent pool and the fan base.”

The league's press release makes it clear that players will still paid next season, but doesn't specify the number of players that will be allowed on each roster nor the amounts that players will be paid. These are important questions, especially considering that the league came into its second season planning to pay players certain amounts -- and then had to make massive, unanticipated salary cuts midway through the season.

In other news, the NWHL also announced Anya Battaglino as director of the Players' Association. The Connecticut Whale forward will collaborate with the league and other player reps. This role, again, is crucial, considering that players were reportedly not consulted when the decision about payouts was made.

Finally, the league announced Monday that the trade deadline will be Wednesday, February 8 at 1:00 PM EST. The deadline was originally set for March 3, but was moved up to accommodate the shortened season.

The NWHL heads into its All-Star Weekend this coming Saturday and Sunday, with both the skills competition and All-Star Game in Cranberry, PA. The season picks back up on February 18 with the Beauts and Pride facing off; the Whale and Riveters then match up the following day.