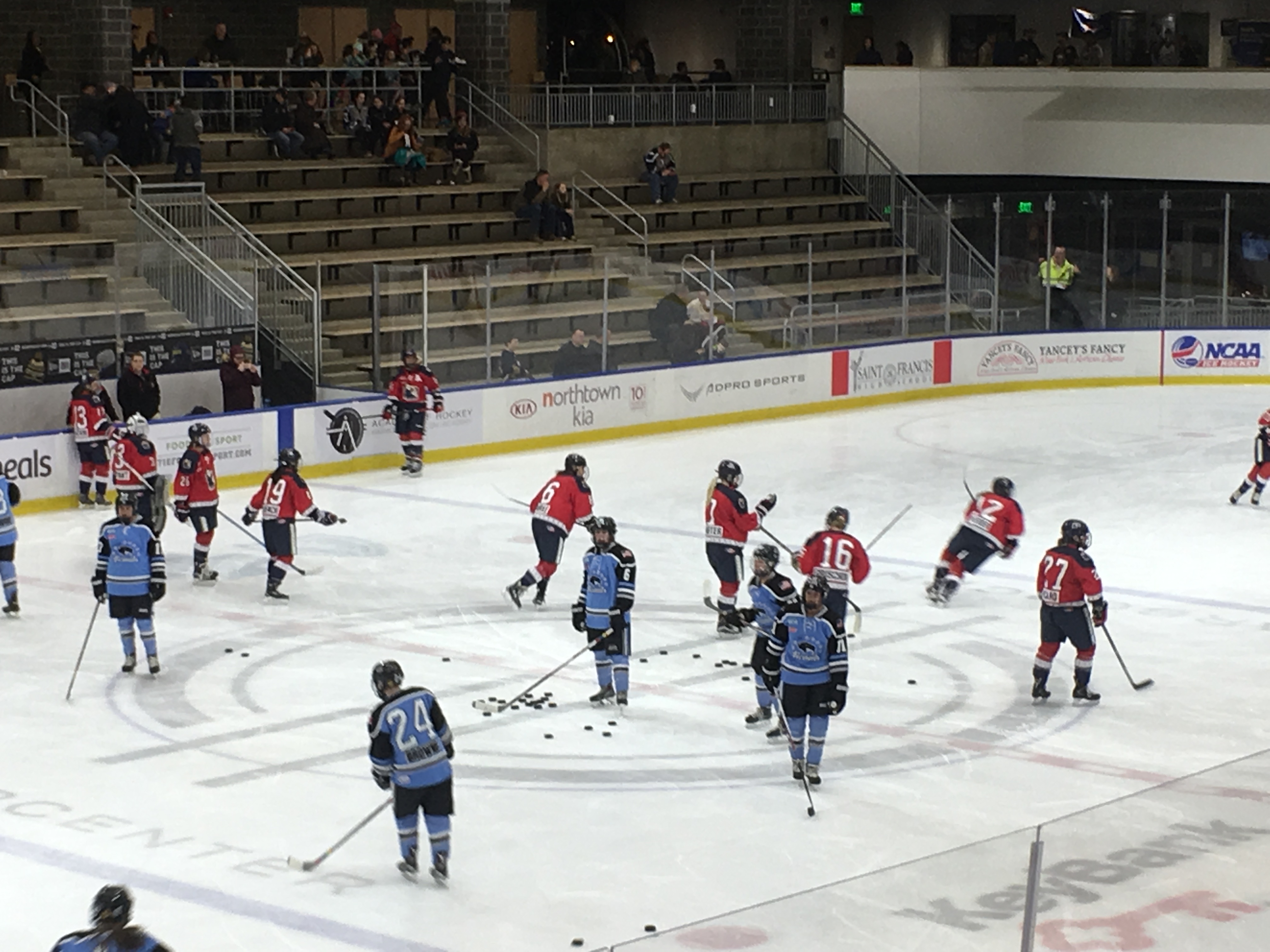 It took a six-round shootout, but the Buffalo Beauts found retribution over the New York Riveters and pulled off a 4-3 win on January 27 to move to second place in the NWHL.

Kristina Lavoie was the unexpected hero of the game for Buffalo, as she scored the lone goal in the shootout to give her team the extra point.

The win came two weeks after the Riveters handed the Beauts a 3-0 loss.

The story of Friday's game for the Beauts was Amanda Leveille’s outstanding performance in net. While she’s struggled at times during the season, particularly in giving up rebounds, she was on point in Friday’s win, making several huge saves and staying perfect in the shootout.

One of the players who Levielle stopped in that shootout? Her former Minnesota Golden Gophers teammate Amanda Kessel.

"I knew she was going to go five-hole, so my goal was just don't let her score five-hole," Leveille said.

Wash opened the scoring for the Riveters just 2:44 into the first, after the puck got lost in the crease. Milica McMillen notched the primary assist, while Kessel also registered an assist for her first of three points on the night.

New York held onto its lead for just about nine minutes before Megan Bozek scored a beautiful goal from in front of the net. With Gruschow in the box for the Riveters, Bozek tied the game with a signature laser beam shot.

Although both New York and Buffalo were afforded brief power play opportunities, the score remained tied at one heading into an entertaining middle frame.

Just over three minutes into the second period, it was Buffalo’s time to take their first lead of the night. Corinne Buie shot the puck through two Riveters players at the top of the face off circle to make it a 2-1 game. Emily Janiga and Sarah Casorso registered assists.

Soon after, Devon Skeats nearly made it a 3-1 game. As the momentum shifted, Amanda Leveille came up with several big saves to maintain the Beauts lead. The Riveters also had a few close calls, with shots going off the post and just high of the net.

Less than halfway through the period, Leveille found herself down on one side, leaving half of the net wide open for Amanda Kessel to easily score her first NWHL goal to tie the game at two. Kiira Dosdall and Michelle Picard notched assists on the tying goal.

Once again, it was time for Buffalo to take the lead -- this time, thanks to Shiann Darkangelo’s power-play tally, as she put it in down low near the side of the net. Harrison Browne and Sarah Casorso were credited with the assists on the goal, the last of the second period.

A few more power-play opportunities on either side passed, and with them, the second period. But it was far from over, and the Riveters did take advantage of a power play in the third period. With Browne in the box for body-checking, Kessel scored her second goal of the night.

Despite several more power play chances and several more pucks off the posts on either end, the score remained tied at three after sixty minutes. The Riveters even managed to ring one off the post behind Leveille during the resulting overtime period, but to no avail.

Alas -- to a shootout they went. Player after player tried, with no change in the outcome. For the Beauts, Bozek, Darkangelo, Buie, Kourtney Kunichika, and Casorso were all unsuccessful in their shootout attempts. Kessel, Miye D’Oench, Janine Weber, Dosdall, and Madison Packer all tried for the Riveters, with no goals.

Kristina Lavoie played the hero, scoring in the sixth round of the shootout for Buffalo on the five-hole. Leveille made the final save on Bray Ketchum, and the Beauts skated off with their third home win of the season.

"The team and I really connected," Leveille said. "I was giving out rebounds and they were always there to clear them. They blocked a bunch of shots. As a defensive unit, we're all one; we all have the same ideas going forward, and that really paid off."

The Beauts will face the Riveters for the third straight game when they visit the Barnabas Health Hockey House on February 4 to close out their action before the NWHL All-Star Game.