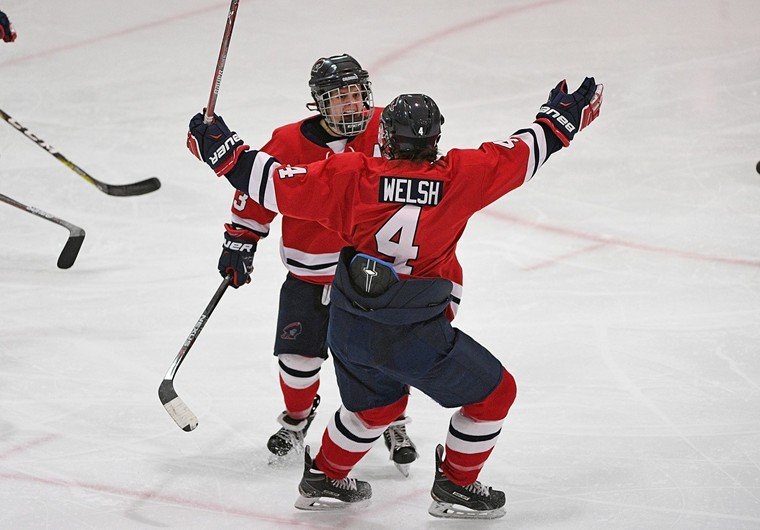 Robert Morris currently sits atop the CHA, but Syracuse is only two points back. Though they've each got nothing but CHA games left on the slate and nothing but places to be tripped up, this head-to-head is going to be crucial in figuring out who ends up winning the regular season title.

Robert Morris' Brittany Howard is third in the country in scoring and freshman Jaycee Gebhard is 11th. They pose a serious offensive threat, and as a result, Syracuse has to find a way to keep them off the scoresheet, especially on the power play.

Syracuse goalie Abbey Miller has been one of the keys to their success this season, though she'll have her hands full with the Colonials. Whoever wins that match-up will likely walk away with the wins.

These teams sit in second and third in penalty minutes, so keeping their calm and not allowing extra attacker situations will be an important part of a winning game plan.

When these two met in late October, UMD dominated one of the games but just eked out a 3-2 win in the second.

The loss was an uncharacteristic one for OSU goalie Kassidy Sauve, who let in four in the first period before being pulled from the game. She's been absolutely stellar in net while saving nearly two hundred more shots than any other D1 goalie.

UMD has wins over Wisconsin and Minnesota, but lost to Minnesota State-Mankato. Ohio State can struggle with offense, but has a rock-solid defense. If there were any games that I think could trip up the Bulldogs as we wind up the season, I think this series is it.

Lara Stalder and Ashleigh Brykaliuk, among others, have been prolific for UMD. But if Sauve can start stymieing them, I'm not sure how Duluth responds.

It should make for entertaining hockey either way.

Not only is this the only meeting of two ranked teams this week, but it's likely that these two teams will be the first two left out of the NCAA tournament. Both need to earn quality wins and fight their way up the pairwise, which is what makes this head-to-head meeting so intriguing.

Princeton's Karlie Lund is tied for third in the country with 18 goals. They've been sharing time in net, and as a result, freshman Steph Neatby has a .952 save percentage through 10 games played.

Quinnipiac is especially potent on the power play and Taylar Cianfarano has six extra-attached goals.

The Bobcats are second in the country, allowing just 1.44 goals per game, while goalie Sydney Rossman has six shutouts.

These are two closely matched teams and it will be fun to watch and see which one of them comes out ahead.

↑Minnesota Duluth's Ashleigh Brykaliuk -- The senior has a 15-game point streak, the longest by a Bulldog since Caroline Ouellette also had a 15-game run in 2003-04. Brykaliuk has nine goals and 12 assists for 21 points during her current streak.

↓Quinnipiac -- The Bobcats dropped to no. 10 in the polls this week, after tying Merrimack and losing to Cornell the week before.

↑Ohio State's Kassidy Sauve -- The redshirt sophomore that came back from hip surgery this season has made nearly 200 more saves than any other goalie in DI and has an NCAA-best save percentage of .966 for the month of January. She's stopped 199-of-206 shots faced this month.

↓Minnesota's Dani Cameranesi -- The Gopher senior is reported to be out for the season after having undergone ankle surgery. If so, it would be a disappointing end to a prolific NCAA career.

↑Women's Beanpot-- The 39th iteration of this tournament starts at the beginning of next week at Northeastern. The host Huskies have won 16 tournament titles, the most all time, followed by Harvard with 14, Boston College with six, and one each by Boston University and Brown.