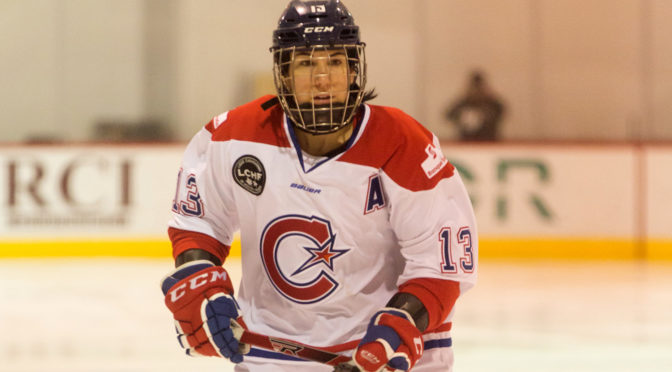 When Les Canadiennes play this weekend, they'll celebrate the 10-year anniversary of the CWHL and will be hitting two milestones of their own.

The first is a long-awaited game at the Bell Centre, which will feature Les Canadiennes playing the Inferno at the home of their NHL partner team the Montreal Canadiens.

"It's historical, it's a big accomplishment," said Les Canadiennes assistant coach Lisa-Marie Breton-Lebreux. "As a co-founder of the league I'm very, very proud of this moment we're going to have on Saturday. Plus it's going to be a very good game, so double excitement."

Because this season is the 10-year anniversary of the league, Les Canadiennes wanted to commemorate the milestone and reached out to the Canadiens in an effort to create something special.

"[It's] a heritage to honor the pioneers who started the league...It's big because there's a lot of people who are talking about it a lot more," Breton-Lebreux said. "So they get to know us, if they come to watch us there it's good for our team, it's good for our fan base."

The second is Caroline Ouellette's historic point, as the forward is approaching No. 300 and will likely reach that mark over the weekend -- and most likely will do so at the Bell Centre.

"Caroline has been a pioneer at different levels, of course with her playing and winning four Olympics, her impact with Les Canadiennes as [a] very good team in the league for so long, for 10 years she has always been [a] top scorer of the league, [she's] an assistant captain and leader," Breton-Lebreux said.

Ouellette has also been passionate about spreading the game for women and girls. She founded an annual girls' hockey peewee tournament in 2014 and runs her own hockey camps.

"She's trying to promote women's hockey and make it accessible to all and is a role model. She's a very good role model for all those young and older females out there. So she has impacted the league, I think, one of the most because she's been there the longest."

As a member of the Canadian national team, Ouellette holds many World Championship medals and has four Olympic golds. Ouellette is in her eighth year with the CWHL and has only played for Montreal, winning three Clarkson Cup championships. In 2010-11, she was the league's top scorer with 71 points.

Ouellette graduated from Minnesota-Duluth with 229 points over her four years and was a top-three finalist for the Patty Kazmaier Award in 2005.

"Caroline is a [player] who always loved training," Breton-Lebreux said. "I mean, she's still jogging three times a week if not more. She has been training her entire career in going above and beyond, she's on the ice practicing, giving the skills to the Hockey Canada players here in Montreal...She keeps on working on her game even at the end of her career. Because of all that training and that dedication, I think it's just the love of the game.

"She's always had the fire in [her] eyes. When she gets the fire in the eyes, you know she's going to look for a big goal for your team. I think it's her passion and her work ethic."