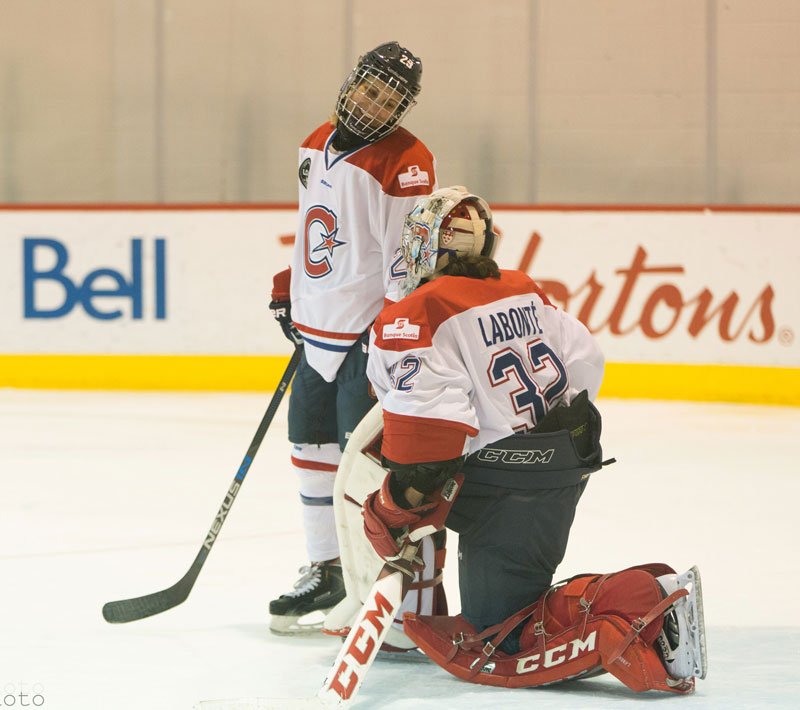 The weekend of CWHL play featured a sweep and a split, proving the CWHL is indeed a four-team league this year. Brampton and Toronto split their games, while Les Canadiennes defeated Boston by a combined score of 15-0.

After the sweep, Les Canadiennes now hold a one-point lead over Calgary for first place. Toronto isn't that far behind, as they're just five points out of the top spot. But Brampton, who are also challenging, holds the fourth-place spot just nine points out of first.

After a tough weekend, Les Canadiennes rebounded with a sweep over Boston. The series was an unfortunately familiar trouncing for the Blades, with Les Canadiennes winning 5-0 on Saturday and 10-0 on Sunday.

"Saturday, I thought we played pretty well," Blades head coach Brian McCloskey said. "Sunday, unfortunately, we did not play well, and it showed on the scoreboard."

Charline Labonte only needed to stop 11 shots for the shutout, while Lauren Dahm stopped 26 pucks.

"[Our biggest strength] was to stay within the structure, to get into good habits and shooting the puck instead of passing, passing, passing, and then shooting," Les Canadiennes assistant coach Lisa-Marie Breton-Lebreux said.

On Sunday, 11 different Les Canadiennes skaters netted a point in the victory. Both Caroline Ouellette and Karell Emard recorded hat tricks, and Ouellette added another goal to finish the game with a total of four. Bettez had three assists.

Dahm stopped 35 pucks for Boston over 40 minutes of play, while Jetta Rackleff played for the last 20 and made 16 saves. Catherine Herron earned the start for Les Canadiennes, making five saves.

"In our zone, [we need] a little bit better coverage being aware of our positioning, and we're going to have a chance to do it against Calgary this weekend, so we're going to work on that this week," Breton-Lebreux said.

Brampton won the first game of the series, taking away a 4-2 win. The Thunder pulled ahead with a 2-0 lead in the first two periods thanks to Laura Stacey and Sarah Edney. Kelly Terry cut the deficit to a goal, but Becca King scored her first of the season to give Brampton back the two-goal lead.

"On Saturday we showed a lot of fight, we didn't go away easily for Brampton. Even though we didn't have our best game on Saturday, we still continued to fight and battle," Toronto head coach Sommer West said. "On Sunday, I think we came in with a lot of jump and I think for 60 minutes we kept up a really good hard-fought game and didn't divert from our plans, even though sometimes things weren’t going our way."

Natalie Spooner scored with 10 minutes left to give Toronto hope, but Stacey iced the game with an empty netter. Liz Knox made 18 saves in the win, while Christina Kessler made 32 saves for the Furies.

Brampton head coach Tyler Fines said the Thunder were active on the power play with shots, but need to focus on discipline.

"We took a lot of penalties and just have to bury our chances," Fines said.

The Furies bounced back on Sunday for the 4-1 win. Kelly Terry buried the first goal, but Jess Jones tied it in the second. Spooner scored her second of the week to help the Furies enter the third ahead 2-1. She added another tally in the third to put the Furies ahead 3-1 and Carolyn Prevost added one in the empty net.

Sonja van der Bliek was the winning goaltender for Toronto and stopped 21 pucks. Erica Howe started for Brampton and made 24 saves.

"She's always had the fire in [her] eyes. When she gets the fire in the eyes, you know she's going to look for a big goal for your team." -- Les Canadiennes' Lisa-Marie Breton-Lebreux on Caroline Ouellette

↑ Caroline Ouellette: Despite how long Ouellette has played hockey, she hasn't slowed down at all. She scored six points last weekend, including a four-goal game on Sunday. The veteran has scored in every game this season but two, and is just one point away from reaching her 300th.

↑ Kelly Terry: Terry missed a lot of games last season with an injury, but her presence this year has been a factor in Toronto's success. She recorded two points on Sunday and has a four-game goal streak. And she's leading Toronto in faceoff wins.

“She’s been lining up against the other team’s top lines and her, [Jenelle] Kohanchuk and [Emily] Fulton and [Jess] Vella, they flop in and out on that one side, but the four of them have done a really great job against other teams' top lines," West said. "Sometimes it’s a tough job to try to play and be defensive-minded. They’ve done an amazing job and I couldn’t ask for anything more from those four."

↑ Sonja van der Bliek: West said they have a plan for the goaltenders until Christmas and have been discussing at the end of each week who will play. A rotation has been maintained, but Sonja van der Bliek has been playing very well when she's been in net. She stopped 22 shots in the win over Brampton and her 0.944 save percentage is the best in the league.

↓ Boston's Transition D: This goes along with what I mentioned last week and how the Blades are struggling, and where they're struggling, which is on the transition.

"We just weren't picking up people or we weren't reacting quickly enough on turnovers to get back and provide a strong defensive posture," McCloskey said. "Montreal's the kind of team where you don't transition to defense well, you end up paying a price."

↓ Rookie scoring: The 2016 CWHL draft class started the season strong, but scoring from the rookies has dropped off quite a bit. Sarah Lefort still leads all rookies with nine points, but just had a four-game scoring drought that she snapped with a goal against Boston.

↓ Calgary's goaltending: Not in the sense the Inferno netminders are bad (seriously, they're keeping a stash of gold back there). Calgary has three extremely good and healthy netminders on their roster, and they run a rotation that uses all three. It's tough for hockey and tough for fans when a talent like Emerance Maschmeyer only gets the occasional start. Delayne Brian, Geneviéve Lacasse, and Maschmeyer would likely all want to start more, but being in Calgary keeps Lacasse and Maschmeyer close to Hockey Canada's headquarters, and both are looking ahead to the Pyeongchang Olympics. Brian, the reigning Clarkson Cup champion goaltender, might not be on the national team in recent years but is still an important part of the Inferno team. All three deserve to play as often as possible.