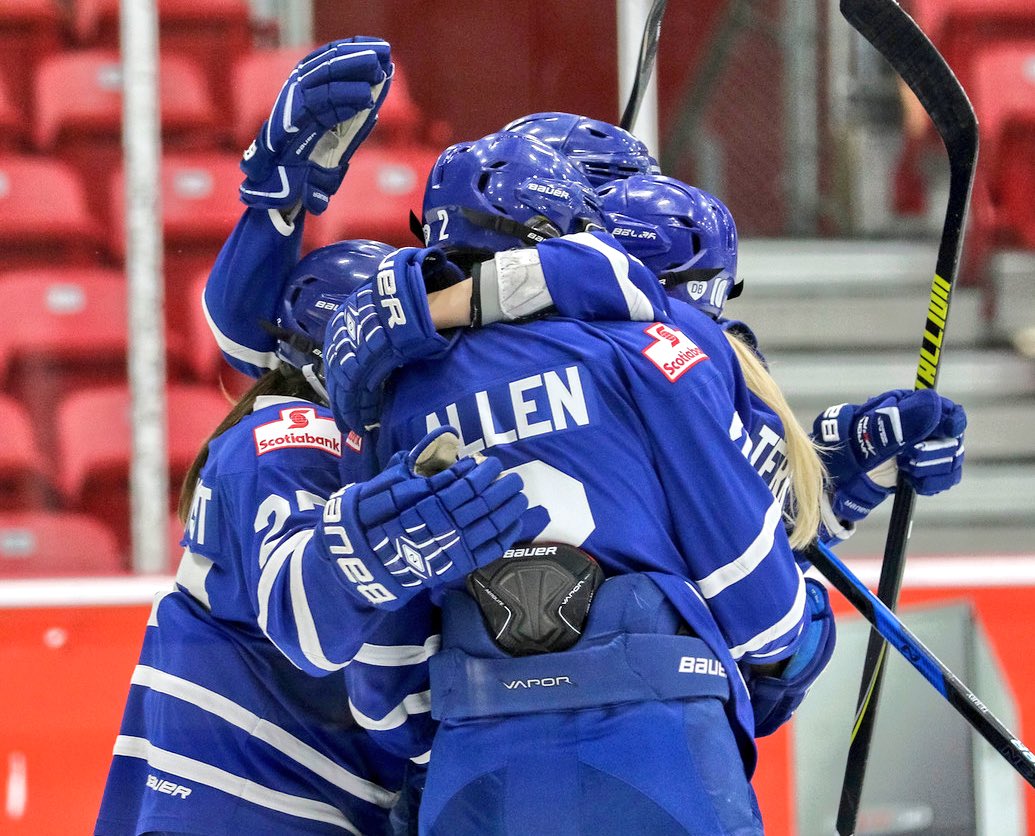 Last weekend was one of the most interesting so far in the young CWHL season. The Furies pulled off two big wins over Les Canadiennes, while Brampton's offense came to life in one game in its series split with Calgary.

After Toronto's sweep of Les Canadiennes, the two teams are now tied for second with 12 points each -- although the Furies have played in two more games. That leaves Calgary alone in front with a two-point lead on both teams. Brampton sits fourth with five points.

Other News and Notes

The Furies put together their best weekend of the season, sweeping Les Canadiennes. Toronto opened with a 2-1 win on Saturday night. Les Canadiennes took the 1-0 lead when Caroline Ouellette scored 10 minutes into the game. Jenelle Kohanchuk tied the game with 11 seconds left in the second period, setting up a showdown in the third. Kelly Terry scored the game-winning goal 4:16 into the third.

“I think our attention to detail and all little details is what set us above where we’ve been at," West said. "Everybody [is] buying into our systems and our team play and just playing as a team is what it comes down to.”

Christina Kessler made 18 saves in the win while Catherine Herron stopped 28 shots.

“I thought it was probably one of our best weekends to date that we’ve had back there," West said.

Toronto scored three goals in the first six minutes of Sunday's contest and entered the second period ahead 3-0. Les Canadiennes scored the next two goals, but Terry padded Toronto's lead late in the third and Renata Fast potted the empty netter.

"We were not the sharpest, which I mean sometimes it happens so that’s about the first game," Les Canadiennes assistant coach Lisa-Marie Breton-Lebreux said. "I think the second game we tried to adjust too much to try and match the lines on the other side and not playing our game. After the first period it was 3-0 we decided to really just go out roll everyone, everyone worked hard and we had a very good second and third period. We had a lot of scoring chances even though we still lost the game we were dominating out there."

Brampton's offense showed up on Saturday in its 5-2 win over Calgary. The Thunder scored twice in the first period, thanks to Jess Jones and Laura Stacey. Blayre Turnbull cut Brampton's lead to one goal in the second, but Jones netted her second of the game just two minutes later. Calgary fought back before the period was over with a tally from Brianne Jenner.

The Thunder entered the third period ahead 3-2, but Jamie Lee Rattray made it 4-2 less than seven minutes into the final frame. Sarah Edney added the insurance goal late. Erica Howe earned the start for Brampton, making 26 saves. Emerance Maschmeyer made 34 stops for Calgary.

Sunday's game was reversed, with Calgary getting the 4-1 win over Brampton. Jill Saulnier netted the lone goal of the first period, but Rebecca Vint tied the game 11:27 into the second period. Jessica Campbell gave Calgary back the lead with 37 seconds left in the frame.

Katelyn Gosling and Iya Gavrilova scored in the third to put the game away. Genevieve Lacasse made 26 saves, while Howe stopped 30 shots.

Three Up, Three Two Down

↑ Toronto: The Furies have had a great season so far, and the win over Les Canadiennes' was proof of how much better the Furies are. While the team's success can be credited to a combination of changes, there's no question Toronto has benefited from being healthy and having players like Kohanchuk, Terry and Julie Allen back.

“You can then balance your lines and you can have four strong lines," West said. "You can have lines to match other teams and you don’t have to worry about so much when you’re in another home arena about them matching because you’re a lot deeper."

↑ Parity: Toronto's resurgence has really helped parity in the league this year. The standings are close and the play has been closer. It's good for the league to have more than just two top teams competing, and hopefully the Blades will join the rest soon.

"[There's] more competition and the games are close," Breton-Lebreux said."

↑ Balanced scoring: This goes along with parity in the league. While to no one's surprise Marie-Philip Poulin - along with teammate Caroline Ouellette - is leading the scoring race, Calgary's Jill Saulnier is not far behind. Toronto rookie Michela Cava ranks fifth with nine points.

↓ Rookie scoring: The CWHL welcomed an impressive rookie class thanks to the draft in the summer. They made an immediate impact and are still scoring, but it's slowed down a little bit. Still, it would be best to keep an eye on Cava, Sarah Lefort, and Laura Stacey.

↓ Les Canadiennes' identity crisis: Les Canadiennes got swept for the first time all weekend. It was a tough pair of losses, but Breton-Lebreux said it was a good wake up call for the team.

"We realized we should just play with our own identity, which is go all out, go hard and not worry about the other team but just our team," Breton-Lebreux said.

"You learn when you lose a lot more than when you win, and earlier in the season is much better than later on. ... Personally as a coach and an ex-player I always think that it’s good to lose so we don’t think we’re on top of the world."