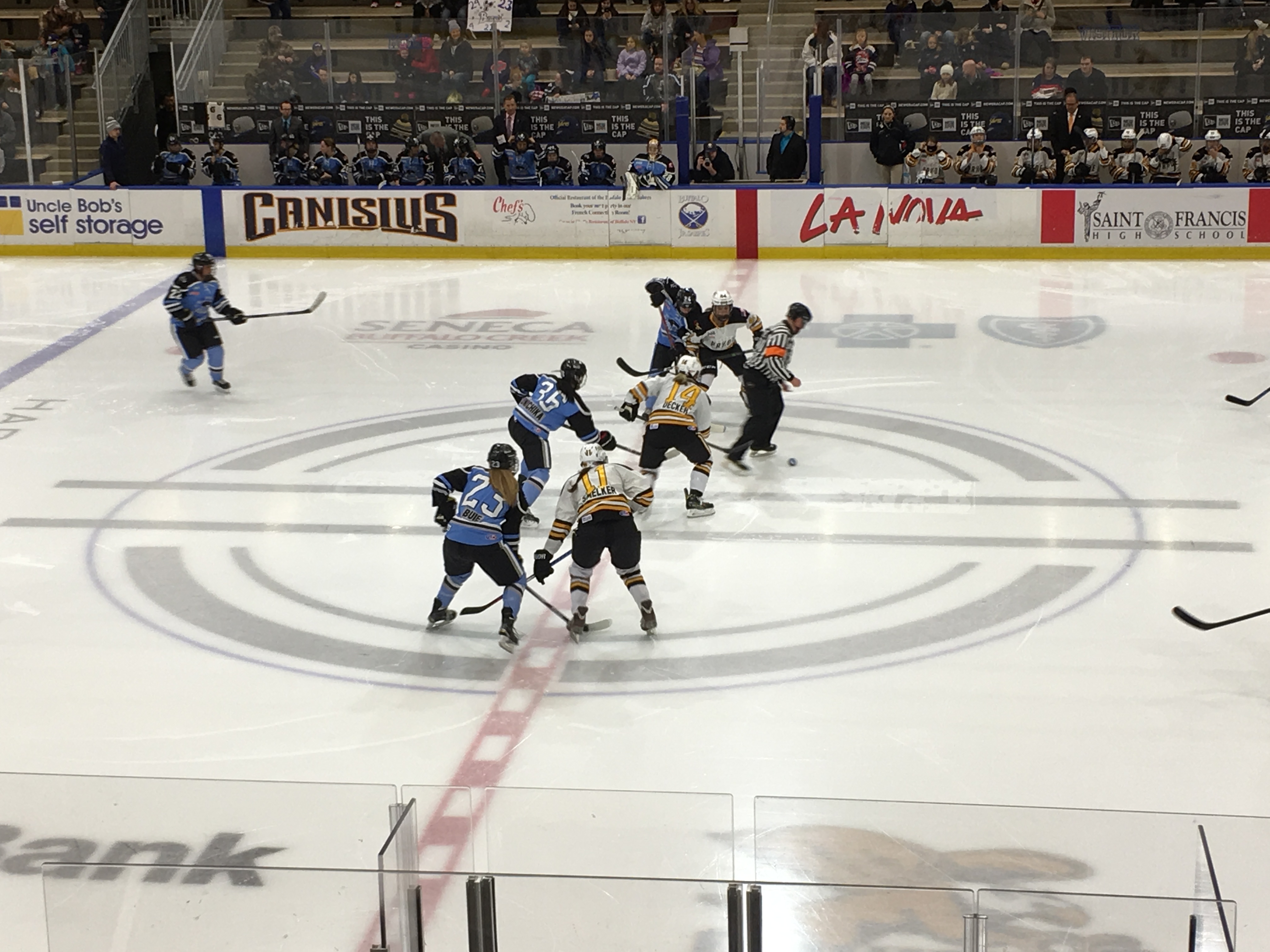 That's what Buffalo Beauts forward Megan Bozek said following Sunday's 5-0 loss to the Boston Pride, a game that left the Pride undefeated and on a 17-game winning streak dating back to last season.

As has often been the case, the Beauts struggled to match the offensive, strong Boston team. They were outshot 20-4 in the first period, but managed to skate off down just 1-0 after twenty minutes.

Boston's Lexi Bender tallied her first goal of the season less than seven minutes into the first to put the Pride up 1-0, on a wrist shot from the top of the faceoff circle. Kacey Bellamy potted the lone assist.

The Pride continued to pepper McLaughlin with shots, and scored once more on their 28th shot of the game, just over eight minutes into the second.

Meghan Duggan's second goal of the season came five-hole on a four-on-four opportunity, which, prior to the Boston goal, allowed Buffalo perhaps some of their best chances of the game. Alex Carpenter registered an assist.

The Beauts got into some penalty troubles throughout the game, including a cross-checking call on defender Paige Harrington.

That call led to a Pride power-play goal, Gigi Marvin's second of the season, on a rebound. Duggan notched the lone assist to rack up a two-point night.

With two goals in less than three minutes, Buffalo quickly found themselves in a hole. The shots after the second period were a 36-11 margin in favor of the Pride.

The third period brought much of the same, as the Beauts had trouble getting out of their zone and couldn't build any offensive pressure. It was only a matter of time before Boston struck again.

This time, it was a pair of goals in a span of 5:25 that put the dagger into Buffalo, and gave the Pride a commanding 5-0 lead.

Rachel Llanes scored her third of the season, with Carpenter popping one in a short time later to further seal the victory. Jillian Dempsey notched an assist on the fifth goal, along with Gigi Marvin, who registered her second point of the night.

In the end, the Pride outshot the Beauts by a 2-to-1 margin, with 46 shots to Buffalo's 22. Brittany Ott registered her second straight shutout, eight days after a 3-0 win over the Connecticut Whale. McLaughlin had 41 saves in the loss.

"We didn't give her any help back there," said Beauts captain Emily Pfalzer. "What can you expect from a goalie? It could've been 20-0."

Both the Pride and Beauts skated into HARBORCENTER on Sunday after a frustrating 48 hours. On Thursday night, the players found out about the NWHL salary cuts, which was a subject that seemed to follow them around the rink.

"Obviously we've had a lot thrown at us the past 48 hours which isn't an excuse, but mentally, physically, that's draining," Bozek said.

"Being focused was a tough thing for us today," said Beauts netminder Brianne McLaughlin. "It was just a topic of conversation wherever you turned your head, which is frustrating because we just want to play hockey."

"We're all thankful for what Dani [Rylan] has done, putting this team and this league together," McLaughlin said. "I think it takes a lot of guts to do something like that."

"We want to know that the best decisions are being made for us. A lot of people in that locker room, their lives changed, for... not the best. So trying to figure that out on top of getting ready for a game was tough," McLaughlin said.

For now, the focus shifts, as the NWHL takes a week off for American Thanksgiving. Teams will return to action on December 3. The Beauts now face a long roadstand, with their next home game not coming until mid-January -- which could help the Beauts in the long run.

"I think part of our problem is our camaraderie on the ice," McLaughlin said. "We're just not gelling like we were last year. It took us a while last year too, so I fully expect that we'll get that going, but I think it's going to take us spending a little more time together."